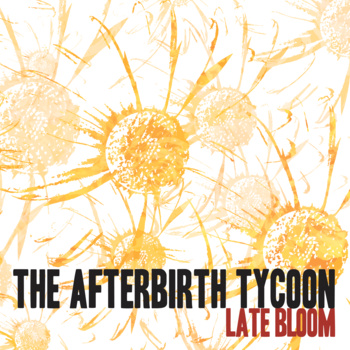 The ground is finally thawing and Buffalo is alive and well. To celebrate our survival of old man winter, several bands released new music this past weekend. The Afterbirth Tycoon is one of the bands which decided to get in on the celebration of spring with the righteously titled Late Bloom. Late Bloom is a 10 song, crusty, whiskey swilling, honky tonk bar brawl of a blues record. You can feel the broken beer bottles whizzing past your head with this one. The record makes you want to go out and do some day drinking out on Allen Street, and get into as many bar brawls as possible. Just make sure you have your bail money on the ready, though, because you have to work tomorrow. Late Bloom marks the first release from the band in nearly ten years.

Originally formed in 1998 by Jason Pitcher (guitar/vocals) with a revolving door of drummers, Afterbirth Tycoon (a reference to the William S. Burroughs novel Naked Lunch) took a hiatus in 2006, and reemerged in 2012 with a new lineup of Pitcher, Rob Barnette (bass), and Joe Peluso (drums). They began recording what would become Late Bloom in May of 2013 with Matt Smith at Hi Lo studios, only to be mastered by John Angelo.

Listening to Late Bloom, you may have the desire to say things like “this sounds like early White Stripes or Cage the Elephant or The Black Keys,” which isn’t necessarily a fraudulent statement. Where  some would say those bands rip off acts like Son House (The White Stripes even covered Son House’s “Death Letter”), Charlie Patton, Junior Kimbrough, and Blind Willie McTell,  The Afterbirth Tycoon has decided to pay homage to those greats and add its own personality to Late Bloom. Check out “Last Morning Call” below and see for yourself.