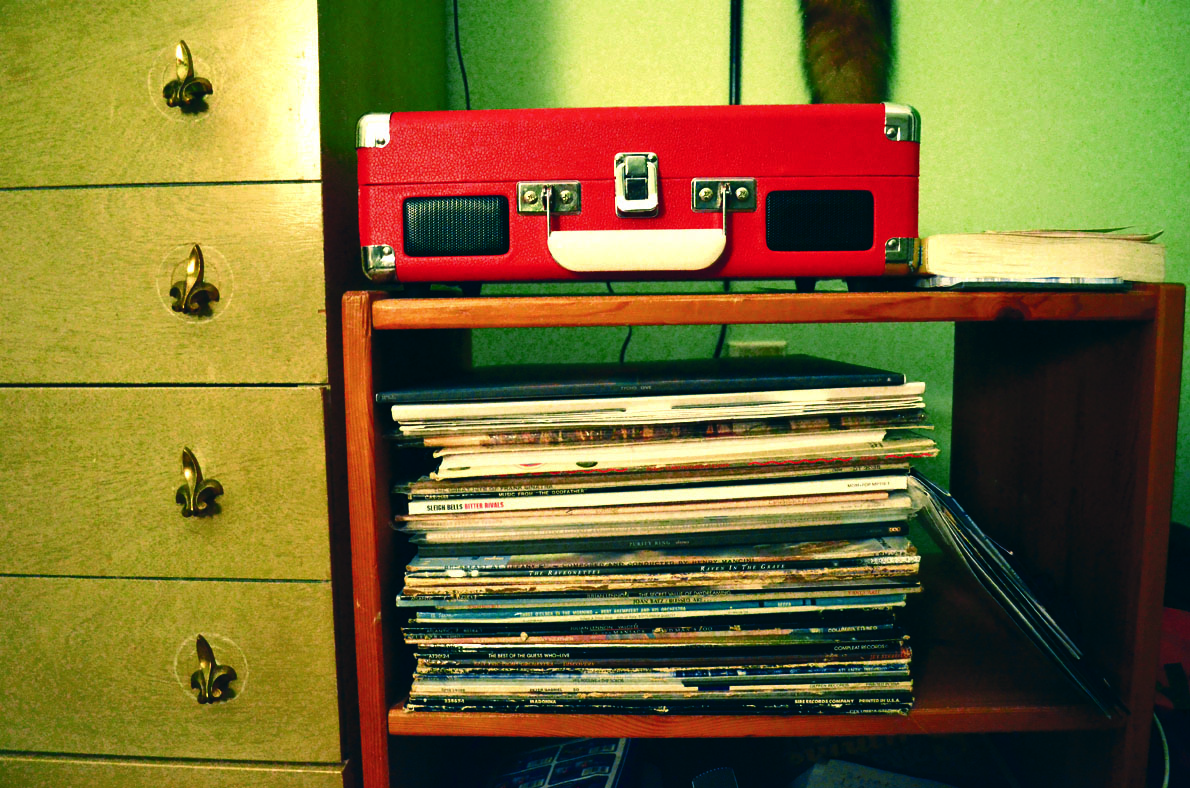 Since my last Record Store Day post, my collection has taken on a life of its own. I have sought out vinyl from my wishlist, in addition to some records that have seemed to just come into my life.

Initially, digging for records was a solo mission of mine; occasionally my little brother and I would go on an excursion to Sound Garden in Syracuse, my hometown. But just recently I experienced that camaraderie that can grow from a visit to the record store.

A couple friends invited me to go to Record Theatre. Surprisingly, this was my first time there. I am shocked (and others as well) that it was my first, mostly because it’s located smack dab in my old neighborhood, when I went to Canisius College.

I went seeking the newest Tycho album, but, to my dismay it was on backorder. So we wandered. Another group joined us at the store, and we all meandered the aisles, picking up vinyl, asking that ever inspiring question: “Have you heard this yet?”

My eyes are still set on Bright Eyes’ I’m Wide Awake, It’s Morning, but instead I left with Wooden Shjips. A band with a sound that I like to categorize as progressive retrograde; the psychedelic sounds bring spot on ’60s feelings. I love the cover of the album Back to Land, even though it is a bit derivative of Zeppelin’s III.

Speaking of which, in the past year, my Zeppelin collection is nearly complete. Biggie has made himself at home on my shelf when I impulse bought Ready to Die. During a Christmas communication breakdown between my brother and mother, I now own two copies of Lana Del Rey’s Born to Die; one is the original vinyl, the other is a Record Store Day special promotion with the album art printed directly onto the wax. Additionally, my little brother picked me up a 45 record of Touché Amoré live on BBC Radio 1. I’m still drooling over the teal-colored vinyl that Purity Ring used for Shrines. For my birthday last year, I was pleasantly surprised to unwrap and find The Godfather Soundtrack and another collection of hits from my man Frank Sinatra. Both of my Sleigh Bells’ records are tucked among the rest: Bitter Rivals and Reign of Terror. A golden score that I came across, thanks to Sound Garden, is a record of Jamie xx edits. Also, when I saw Tycho was re-pressing Dive I immediately bought it, because even after incessantly listening, I still cannot get enough of the oceanic dreamscape sounds.

That’s just to name a few of my acquisitions.

What I love most about a record store is the exploration and discovery. It is an inspiring venture that should be cherished. Vinyl, in certain ways, is a means of connection from person to person. To share your vinyl is a simple, meaningful act. You’re letting someone in on a little secret, as they peak into a concave of your world.

Tom Wolfe once wrote in probably my all-time favorite book The Electric Kool-Aid Acid Test, “Let’s find out where we are. Let’s move it around. Let’s dance on it.”

Music, in any physical form, is just that. A means of exploration. Discover worlds of music and keep the human connection alive. Find out where you are. Move it around, and dance on it.