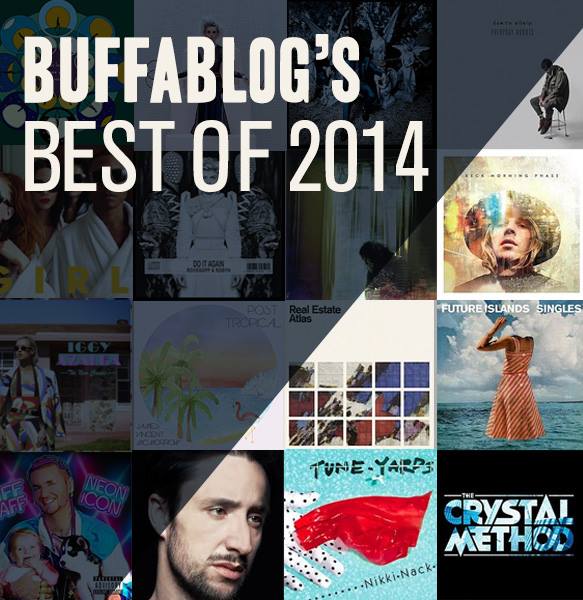 With 2014 at its mid way point, the staff here at buffaBLOG has gone over the first six months of the year and picked our favorite tracks and albums. Variety is always nice on lists like this; it shows that we have been blessed with a rich and diverse year of new music, and for the most point, it is reflected on today and tomorrow’s Part 2 lists.

Album: Liars – Mess
For 15 years, Liars have been tweaking, reworking, and pivoting their sound.  But if there is one thing that has remained constant over the years, it’s that they have always been a little weird. Their front man is even named Angus ,which is a weird name if I’ve ever heard one (apologizes to all the readers out there named Angus). This year, Liars put out their “electronic” album, a record that takes all the beeps and boops they dabbled with on WIXIW and expands them to the outer limits. Gone are the bombastic punk sounds from 2007’s self-titled album & the lonesome hypnotic chanting from 2010’s Sisterworld, now replaced by fist pumping techno jams only a hipster could love. The album starts off with a repetitive voice sample asking the listener to “smell my socks” & “eat my face off,” and yet for all this weirdness, Liars never gets too abstract. Every digital crunch and synthetic smack are carefully placed to create the kind of eccentric rave music you might hear in one of those leather clad clubs from the Matrix. The songs are, for the most part, catchy, symmetrical, and infectious. Sure there are the moments when things get a little lost (the album is pretty top heavy) but these down moments only make the highs that much better.

Song: Conor Oberst – “Double Life”
There isn’t another artist who can tackle life’s hardest questions as poetically as Conor Oberst.  In “Double Life,” Oberst questions life after death on this beautifully countrified composition that’s as reassuring as it is desolate. By far the best song from this year’s Upside Down Mountain, and the most mind bending existential thing since Cosmos ended last month.

Album: Beck – Morning Phase
Beck’s first album in years, Morning Phase drew comparisons to what some consider his masterpiece, 2002’s folk-soaked Sea Change. A closer look, however, reveals a fuller album, enhanced by orchestration, a deeper sense of dynamics, and poignant, focused lyrics. Each song is a certified classic on its own, yet works best as an album listened to from start to finish. From the slow wash of “Wave,” to the Harvest-era Neil Young in “Country Down,” and the multi-harmonied “Blackbird Chain,” Morning Phase is exploratory, fresh, and packed with punch (after punch, after punch). One of those albums that sticks with you years down the line.

Song: Dum Dum Girls – “Cult of Love”
This is the third year in a row Dum Dum Girls have made one of my lists, and for good reason. Their brand of infectious dream-pop meets retro rock is utterly captivating and “Cult of Love” is one of their best songs yet; luscious, dark, swooning and sexy, a perfect encapsulation of the melancholy trapped in their vibe. That, and damn catchy.

Album: Big Mean Sound Machine – Contraband
The prequel to Big Mean Sound Machine was a band called The Buddhi. The Buddhi was a more basic, jazz/ funk fusion where Angelo Peters wrote lyrics and sang, but with BMSM, Peters decided to ditch the vocals all together. The 13-piece group from Ithaca, New York, which is known for Cornell and/or rifles depending on which generation you speak to, have grown into their own, and Contraband is a perfect example. Where on previous records, like Tongue Power and Ouroboros, the horn section was a mere passenger on the flight, on Contraband, it hi-jacks the plane and lands it safely.

Song: Made Violent – “Inside Out”
The second single by the revamped Made Violent, “Inside Out” is everything that is right with the Buffalo music scene; it’s genuine, sincere, and infectious. The raw follow up to “Wasted Days” lets us know exactly who the band with the wild hair really is. Lyrics like ‘Tell me grave digger, how much is a grave?/ I’ve got secrets I can’t take/ Same old mistakes, it’s why I misbehave/ no reason why I just can’t do okay/ Swallowed up all of my dollars spent all my cents,’ are set against a raw guitar driven song structure, something that seems impervious to the Buffalo music scene. “Inside Out” let’s us know that this is just the beginning for these three 21-year-olds.

Album: Angel Olsen – Burn Your Fire For No Witness
My favorite album of the year, thus far, is probably Angel Olsen’s Burn Your Fire For No Witness. Lead-off track, “Unfucktheworld,” is pretty much the simplest song you could imagine, but is absolutely brilliant in the way it manages to get so much out of so little. Every time I hear those simply-strummed opening guitar chords, I feel like a wormhole has opened and I’m listening to a radio broadcast from some other dimension. Olsen’s voice is ancient and haunting in a way that makes her sound as much like Connie Converse’s lonesome ghost as an actual, living, person. Even the songs on the album that are a bit more musically ornate still have a comfortable simplicity to them, as well as that vaguely familiar feeling that all of the best pop songs have; as if you’ve already heard them in your dreams prior to ever actually hearing them in reality. “Hi-Five,” “White Fire,” and “Windows” are also standouts.

Song: Conor Oberst – “Desert Island Questionnaire”
There’s no denying that “Red Eyes” is a windows-down, turn-it-up, banger, or that “Little Fang” is as weirdly catchy as anything I’ve heard all year, or that the ex-members of the Walkmen have written so many great songs it feels more like the band multiplied than split up. But I picked “Desert Island Questionnaire” because it’s wonderfully rich, lyrically, in a year where it almost seems as if it’s becoming fashionable for lyricists to be as vague as possible. It’s a song that could easily come off as comically over-dramatic but it works here because Oberst earns his high stakes through a convincing setup and a careful balance of humility and tragedy. My favorite musical moment of the year comes at around the four-minute mark, where a glockenspiel rises up over a wall of sound and the vocals go up an octave as Oberst laments that he can’t save us all, (staring at our phones, disconnected from humanity) from the burning building that is the “ennui of our times and the selfishness in everyone we know.”

Album: Weatherbox – Flies in All Directions
I tried to think of any album that could eclipse the way this one has grabbed me and sucked me in, but at the end of the day, my AOTY (thus far) has to go to the San Diego punks in Weatherbox. Fond of angular time signatures, existentialist and self-referential lyrics, and blasts of often discordant guitar, FIAD is the perfect mixture of pop and hardcore in a package that skews towards sounding like a new age Weakerthans. The album spans a wide spectrum, with songs like “Pagan Baby” about as straightforward as they come, whereas “The Last White Lighter” ebbs and flows with no particular rhyme or reason. My personal favorite comes from the more timid “Drag Out,” with an impressively calculated math rock ending that you have to hear to believe.

Song: The Hotelier – “Your Deep Rest”
The Hotelier is riding high supporting talk-singing wunderkinds Modern Baseball on tour, but on their recent trek through Rochester, they so happened to take the cake. In what is sure to become their calling card, “Your Deep Rest” off of their newest album, Home, Like No Place Is There, sounds initially like a simple emo/punk number in the vein of Saves the Day or Seahaven, but just wait till the chorus… The kicker? The song is about the suicide of a close friend. Behind the heavy but powerful subject matter, singer Christian Holden’s voice is just quirky enough to catch your ear – you’ll be singing “I called in sick from your funeral” all day.

Album: Sylvan Esso – Sylvan Esso
Back in March, I gave the debut of this duo an A. I am not an easy grader, by any means. Many albums are a meager C at best. What makes this album stand out is its perfect craft. Amelia Meath, former acapella singer, merges with the electronic production of Nick Sanborn, bassist for Mountain Man. Using spare recordings of busy streets, telephone beeps, and ocean waves to enhance the base of the beat, Sanborn brings an electronic platform that Meath’s voice can soar onto. The album explores electro-pop songs like “Coffee” to drum and bass inspired dance-numbers like “H.S.K.T.” Lyrically, they touch base on the caricature of the modern “Male Wolf,” cat-calls, mother-daughter relationships, and the pressures of technology. If you are a fan of a female voice over electronic synths that aren’t overwhelming, give this album a listen.

Song: Angel Olsen – “White Fire”
Angel Olsen’s release in early 2014, Burn Your Fire For No Witness, filled the hole that female Americana-folk singers felt. Album standout, “White Fire,” is a song of strength, rolling in at a ballad-worthy seven minutes. Olsen’s husky voice fluctuates in tone as she weaves a tale of how it feels to be swept up in the intensity of change. Minor, plucked electric guitar rolls on and on as she delivers one smart lyrical line over another. Choice phrases: “I heard my mother thinking me right back into my birth / I laughed so loud inside myself, it all began to hurt” and “If you’ve still got some light in you then go before it’s gone / burn your fire for no witness, it’s the only way it’s done.”

Album: Modern Baseball – You’re Gonna Miss It All
Choosing my favorite album of 2014 was tougher than I had anticipated. There are so many suitable candidates already, but when it comes down to it, the boys of Modern Baseball have won my heart with their broken ones. Sure, on a basic level, You’re Gonna Miss It All is a pretty standard emotional break-up record, but don’t underestimate its ability to captivate. The twelve songs are catchy as all hell and every one of them is worth listening to. The lyrics are witty, accessible, cripplingly honest, and although the subject matter is usually nostalgia-inducing, the guys always manage to keep the songs fun. The crowd at the band’s recent show in Rochester was straight electric- bouncing off of each other like pinballs and passionately singing every single word. If you let it in, the endearing You’re Gonna Miss It All will be your fountain of youth and an important reminder to continue rolling with those punches—however many come flying your way.

Song: The War on Drugs – “Red Eyes”
My pick for favorite song was definitely an easier decision.  Simply put—this song just makes me feel good. The War on Drugs hit a spiritual goldmine with March’s Lost in the Dream. Although the album as a whole is a superbly lustrous little nugget, single “Red Eyes” is a beacon of light, and is definitely my favorite song of the year so far. Synth-driven and soaked in reverb, this song creates an atmosphere that I could bathe in all day. The voice of frontman Adam Granduciel is righteous and true, and he sings through the song with an unparalleled passion. The best part of the song comes around 3:35; the whole band turns it up a notch, the synth hook screams, and Granduciel lifts the song to its peak with his red-hot leads. The music video for the song hit it right on the head: “Red Eyes” will bring you to your feet and get you moving.

Check back in tomorrow for Part 2.