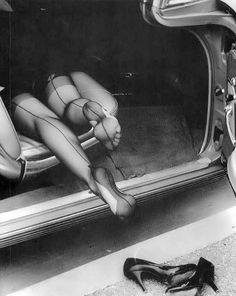 Spooky synth queen, Sparklebomb, has released a new batch of brooding ambient tracks. The Buffalo-transplant / Syracuse native, Angie Conte has been performing under the moniker for close to seven years, perfecting her atmospheric and dismal sound.

As per the songwriter’s repertoire, the intro to “Right Along with Me” leads into the dialogue of an old-time audio of Murder Castle, a drama inspired by serial killer / madman, H.H. Holmes. The dialogue is spliced over ominous organs, eventually introducing a drum machine. The muffled interaction drops,  leaving almost mesmerizing synth loop meanwhile building your anxiety for something to happen, which is a tease because the track fades out much like how it faded in.

If there ever was a musician to score a horror film, it would be Sparklebomb. Check out “Right Along with Me” below and explore the ‘bomb’s discography here.