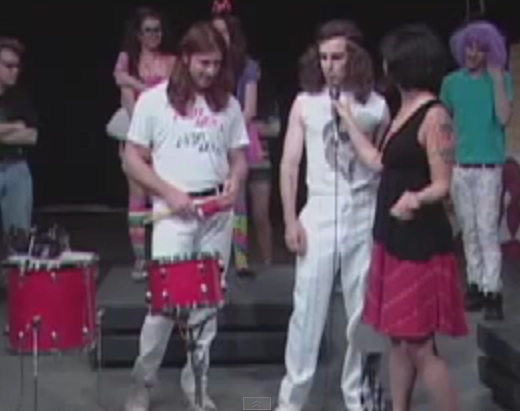 Last spring, two Buffalo acts, Lesionread and Space Wolves, ventured west to take part in Chicago-based public access show, Chic-a-Go-Go. The cult show has billed itself as a “dance show for kids of all ages,” having past guests such as Dan Deacon, Fugazi, TV on the Radio, and Everlast. With teased instagram videos leaked a couple months back, the performances have been anxiously awaited by many in the buffaBLOG office.

In the first video, Lesionread and his merry band of morphsuits bring his converted work bench-turned technology holder to an audience of unaccompanied minors/cool dads. Spazzy and flamboyant, the performance is high-energy much like Lesionread’s usual routine. What is not par is the weirdo popper’s unusually shy demeanor post-performance interview. Perhaps all of the dancing children/TV cameras made him a little nervous.

Following Lesionread (or the order I watched the videos) was fuzz-surf duo, Space Wolves. Although the band is already known for their high-energy performances, the tag team dropped their pesky amps/cymbals and turned it up to 11 to give Chicago public access viewers a taste of their 2013 hit, “Die Trying,” from Space Wolves IV. Post-performance, “Gentle” Nick gives host a brief interview about what it’s like to be a space wolf. Check out their performance below.