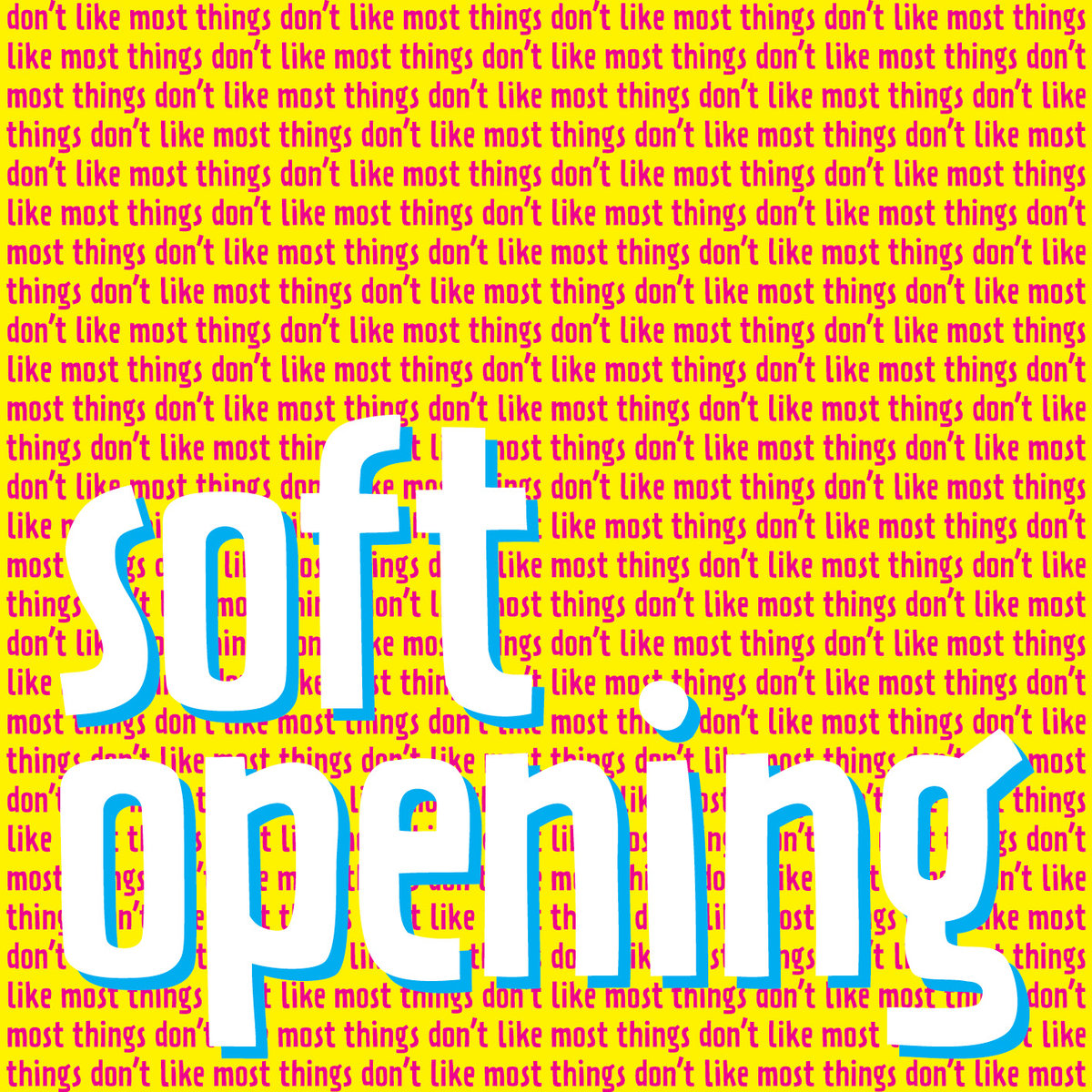 Don’t Like Most Things, the new release from Rochester’s Soft Opening, is not nearly as misanthropic as the title suggests. Far from it, in fact – the best moments of the album spring from longing for connection, not denying it.

The first song, “Don’t Bury Me Yet,” kicks off with distorted and strutting hard rock machismo, but it’s just a feint. It’s almost immediately undercut by a cleaner guitar and a cooing saxophone that launch us into something closer to Dinosaur Jr. than T. Rex. Singer and songwriter Justin Pallini soon begins to catalog his fear of death by bodily breakdown:

The humming sax lines, quick tempo and over-the-top neuroticism keep the mood light, as if he knows the obsession is ludacris and counter-productive. He just can’t help himself.

“Love Dumpster” follows and, despite the name, it’s a surprisingly sweet and measured Shane Meyer-esque tune. The exact dimensions of the narrative are not clear (what does it mean to “find love in a dumpster”?) but it’s a good example of Pallini’s sense of humor. Nothing is silly, but it’s not all that serious, either.

“I Hate You” comes next. A buzzy bassline drives the song toward a chorus made to be sung along with (who hasn’t wanted to scream “I hate you” at the top of their lungs)?

The twist is that, if you listen to the lyrics, you discover that this not a diss track. Pallini is singing to himself, dishing out the kind of barbed advice you might give yourself after a long night of drinking and running your mouth:

“You can’t teach your worthlessness/You lay in bed wishing you still had friends/Your only enemy is your stubbornness/Grow up already and get over this.”

It’s a clever turn, but a bit cute and on the nose, and it makes “I Hate You” feel out-of-place Pallini’s strength is in messy vulnerability. “I Hate You” is too clean-cut.

The album’s final three songs more than make up for this misstep, demonstrating the creative fruits of letting this tension go unresolved. “Nothing Left to Hide” is bouncy and catchy even as Pallini resigns himself to some underlying depression, singing:

“When there’s nowhere left to run from the bullet of a gun, I won’t die/Because there’s nothing left to hide.”

“Just Don’t Let Go,” meanwhile, is less introspective. Pallini begs to reverse a breakup, claiming that he “won’t go down without a fight.” The song soars, however, when he drops the threats and proclamations and, with his vocals washing into the instruments, he repeats “just don’t let go” as the band fades out.

The best song on the album, however, is far and away the final one, the Silkworm-esque “*”. Pallini’s dark sense of humor, his sense of narrative and the talented but restrained band backing him up all come together as he sings, simply:

“I want to shoot myself in the head/But I don’t own a gun… so I went to the store and I bought myself a pistol/But I couldn’t buy the bullets because I’m too much of a wimp.”

Of course, there’s nothing funny about suicide, but the dry and matter-of-fact way he describes driving home from the gun store only to crash his car into a light post underscores the dark absurdity of the whole situation without making it entirely into a joke.

He emerges from the car crash unscathed, but the sadness, darkness and doubt remain, simmering below the surface of a screaming chorus and a dramatic guitar solo.

In short, “*” is a microcosm of the best parts of the “Don’t like Most Things.” The melodies are catchy, but the mood is dark. The tension escalates, but the conflict remains unresolved. We might curse the depression at the core of things, laugh at it, stew in it – but, with Pallini and Soft Opening, we never escape it. We just sing along.