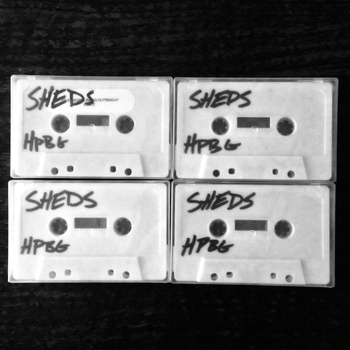 The glory of the the DIY/ House venue is the element of surprise. Sometimes you are lucky if you know more than two bands. Then there’s the out-of-town band. But there is always that variable, that one band that no one knows shit about. SHEDS is one of those bands. SHEDS just played their first show earlier this month at the Glitter Box.

“We were kind of removed from the live music scene for about a year,” guitarist Patrick McPinic says, “during which we holed up every weekend to play music. We really enjoyed all of the bands at the Glitter Box show.”

SHEDS consists of a trio of Lancaster natives: McPinic, Justin Young (guitar/vocals), and Jason Overholt (drums). They have been playing together for almost a year in a half and just recently released their first single, “HPBG.” If you happened to carouse the merch table at their Glitter Box show, you couldn’t help but notice SHEDS’ set up: a collection of old cassettes with “HPBG” abrasively scribed across them and a group of black floppy disks with the same lettering. Yes floppy disk!

“The essential product, when one purchases music, is audio waves,” Young explains. “Everything else is just something to play with. The physical material is actually immaterial.”

SHEDS will be playing the Glitter Box again on December 6th, but in the meantime, the trio will be recording its next single, which will be available on cassette by show time.

“After that, the idea is to work on a full length” Young states. “That might be ready as early as spring 2015, but which could easily take until late next year.”