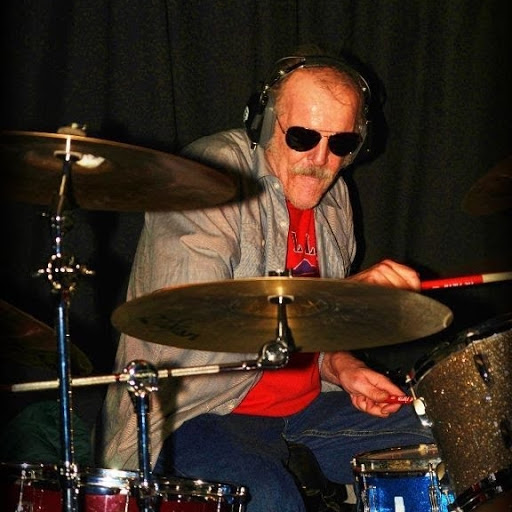 There is a significant generational gap between us “millenials” and those who are most familiar with Ted Reinhardt’s extensive and brilliant music career. Before many of us were even born, Ted had already been inducted into the Buffalo Music Hall of Fame in 1985. Though the larger demographic of buffaBLOG readers are not familiar with a significant portion of his music career, any of us that had met him will likely be able to recount the meetings with genuine enthusiasm.

I had met Ted at the now extinct Club Diablo after his set with Left Hand of Darkness, where he showed me his remarkable drum set, and encouraged me to make use of the extra snare drum which he had placed vertically on an arm attached to his cymbal leg, with a kick pedal used to strike it. This was the same man that I had seen earlier in the night sitting in his car in the middle of the dark Diablo parking lot playing rudiments on the steering wheel.

After that, I had been wandering music stores by myself trying to strike the best deal on a bass drum pedal worth nearly half the price of my full drum set, and there was Ted. He was by himself as well, taking drum stick after drum stick and testing to make sure that none were warped. He went on for nearly five minutes rolling sticks and doing different exercises on the counter of the Guitar Center drum section, likely to the dismay of the associates working there, to find the perfect sticks. Watching him from the other side of the room, there was an air of mysticism. Ted showed the zeal of a child on Christmas, yet the enthusiasm had been honed and placed into man who had mastered, loved, and cared for his trade.

The final time I had spent with Ted was at a show we played together a few months ago. Ted approached me and endlessly (with the utmost delight and passion), showed me some of the most absurd rudiments, sticking techniques, and all around drumming “concepts” I had ever seen or heard. He showed me complete inverses of rudiments, playing rudiments with accents mirrored, and sticking patterns that, explained verbally, make no sense at all until actually played, with an unabashed level of excitement. All of this, he told me, he does at home when he’s bored and watching television. He said that if he were to sit and waste his time watching “garbage” on television he may as well be working on something.

We exchanged texts and sent one another Youtube videos. He would send me brilliant videos of a 70 year old Han Bennink playing a drum solo beginning on his shoes and ending in tremendous fashion on his drum set, while I would send him videos of Hella and Lightning Bolt.

The few times I had spent around Ted are comical to look back on. Comical because I was interacting with a man thirty-seven years older than myself who showed such adoration and love for what he did that it seemed hard for him to contain himself. One would be hard-pressed to find anyone, of any age group, who shared the passion and love for drumming that Ted showed.

Perhaps it is a thing of generational differences, but for us to encounter another man like Ted Reinhardt and share the pleasure in experiencing his sheer excitement for drumming, seems to be a distant hope. Young and old, drummers, guitarists, musicians, and people alike, we will all miss Ted.