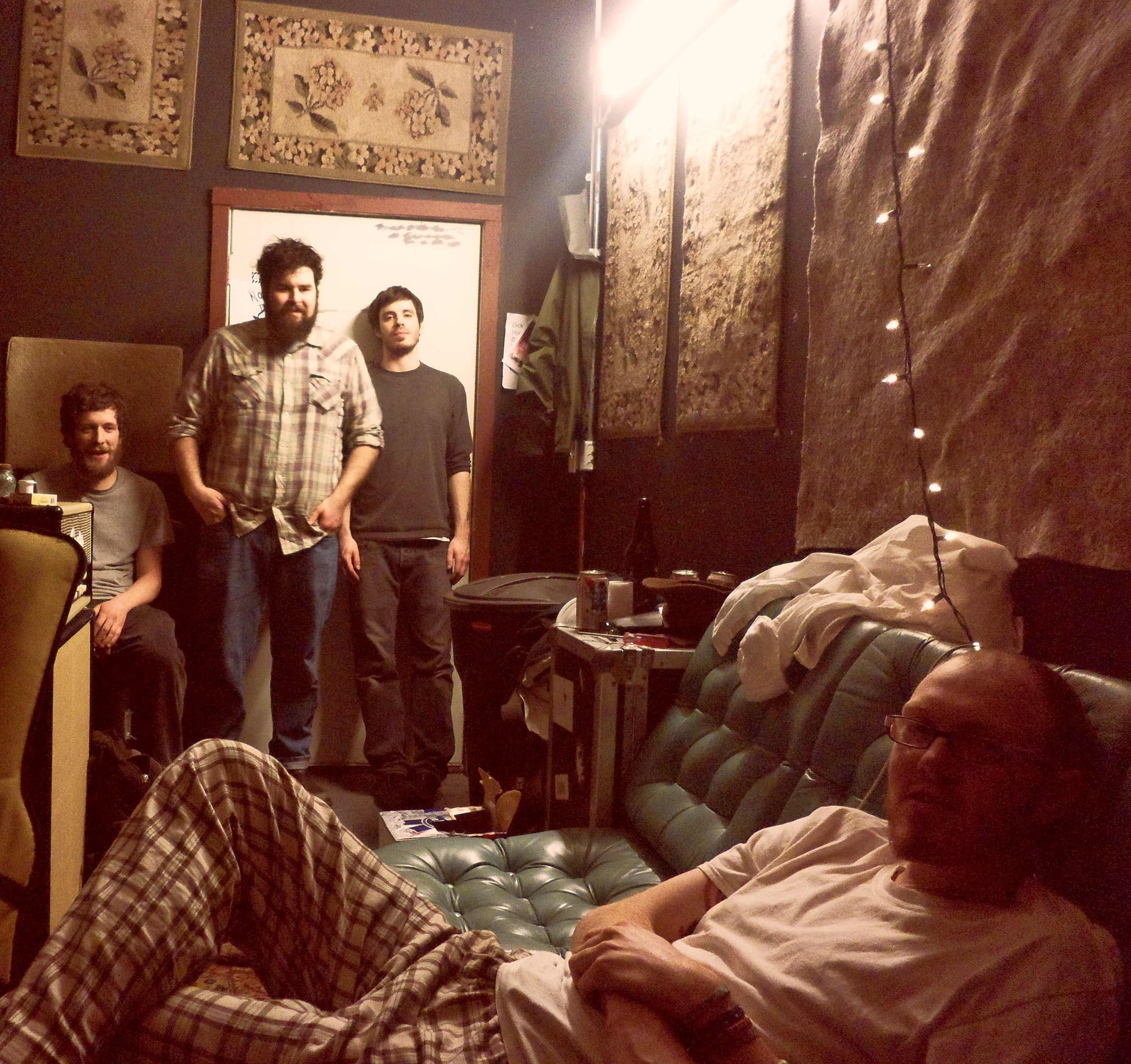 Editor’s Note: Local musician John Toohill (JOHNS and Alpha Hopper) will occasionally sit down with touring bands and ask them some questions. For his latest installment, he spoke with Matt Becker of Boston’s Pile, set to play Buffalo this Sunday, October 12th, at Ocean Garden Oriental Foods (1235 Niagara Street).

John Toohill: Hello Pile. Are you a particular pile of anything or can any old heapin’ mass of whatevers load on up and climb aboard?

Matt Becker: Hey John. This is Matt, the guy who promised you a show, dropped the ball, and Rick picked up the pieces for me. Sorry about that again. I’m dumb. That’s why Rick takes care of stuff. Basically, we’re not a pile of any one thing. I don’t think a pile should really be one thing. It’s like, if you have a whole bunch of chocolate chips, you have a mound of chocolate chips. Or if you have a whole bunch of trash, its a heap. A pile is kinda like a whole bunch of random stuff, like when you have a messy room. You have a pile of dirty clothes, DVDs, candy wrappers, pizza boxes. That’s a pile. But that answer is irrelevant. The band is actually named after Gomer Pyle, just like 1/2 the people who ask guess.

JT: Matt! You daffy bastard!  So you are named after Gomer Pyle. I had noticed in a lot of the lyrics to your songs, there is this mysterious “He” subject. That’s so crazy it’s all about ole GP. Who knew he was such a weirdo pervert! You guys knew him personally or what?

MB: Haha John. I hope you’re doing super well! The “He” in our songs is almost always a direct reference to Gomer, AKA, Rick’s grandfather, Jim Nabors. He’s a pretty big influence, in and out of his TV roles as Gomer. Either way, I don’t know him as well as Rick, but he’s been pretty nice to me. His perversion is generally kept to the bedroom and our practice space. He puts on a pretty square act in person.

JT: Wow! Did you guys ever get to meet Don Knotts?! Now I KNOW that guy was sexually deranged being. Didn’t he die of autoerotic asphyxiation?

MB: We’re also old friends with Don Knotts. I’ve always admired his bone structure and his eyes. I also admired his film work, especially Herbie Goes to Monte Carlo, the fantastic third installation in the Love Bug franchise as well as his voice as T.W. the turtle in Cat’s Don’t Dance. He was into some crazy kinky shit. I usually left the room when he started talking about his exploits and his eyes would start poping out of his head. He admitted to me in confidence (whoops) that he was the one who killed Bob Crane during a bizarre sexual encounter. As for his death, I’m really unsure. Our relationship soured when we chose to name the band after Gomer Pyle and not Barney Fife. Fife would be a dumb band name though, wouldn’t you say?

JT: Amazing. But Fife? Isn’t that the one Canadian female singer/songwriter? Ya know that song that was everywhere in like 2008? Surely bobble head Barney would be proud of her Juno awards. Any who. What the fuck were we talking about?  How’s the rest of the band feeling out on tour right now? You guys are doing like a million dates. How’s Rick? I bet he wouldn’t have let me fuck this interview up this bad…

MB: I had to do a Google search, I guess that was Feist. I don’t listen to the radio. I sold mine so I could buy beer, so I’m generally clueless about modern pop music. Maybe Feist could change her name to Fife and we could do black and white concerts together, Fife and Pyle. And yes, bobble head Barney would surely be proud!

Yes, we certainly got a little off topic. The band is feeling well, all things considered. Our van is in the shop back home, eating up all of our (read: Kris’s) money, so we borrowed a van. We’ve gotten foour new tires this tour and are in the process of getting a new transmission. Friends of ours helped us out loaning their van and are being exceptionally nice to us, so we’re all happy, if a little bummed out to be the ones out ruining a good person’s van.

We’re doing some dates for sure! Most of it is recording, or a little less than half is recording. We’ll be doing a million dates in the spring. Rick is doing well. We’re sitting next to each other on our computers ignoring one another. You know what though? He probably would have let you fuck it up, because he’s currently letting me fuck up all the answers to your questions as we speak.

JT: Recording?! Do tell. You really made a lot of fans here in Buffalo with that Dripping record. We legit like you guys, which might be bad like because we love The Buffalo Bills. But you guys have a little of that 90’s noisy rock thing going on in your sound. Maybe this is your early 90’s Bills era? What’s it like out there right now? People seem into it? Like did you quit your jobs and hire roadies? Are you making it? Should I be taking this little talk more serious or what?

MB: Yup, recording! We’re out in Omaha currently recording at a really cool studio. I’ve never been in such a nice place before (except maybe Don Knott’s house). We’re recording a new full length album, and it’ll hopefully be out before we go on tour again.

And whoa! If Buffalo likes us that’s really cool, cause we’ll be there in like a week or so. And don’t worry about the Bills. The Patriots don’t seem to be doing so hot, I don’t think they’ll do amazing this year. We’re not huge Patriots fans either. Well, the band The (New England) Patriots is pretty fucking awesome. Maybe this year, the Bills can get all the way to the Superbowl and add another loss to your city’s stunning Superbowl track record (I keed, I keed, four consecutive Superbowl appearances probably will never happen again).

It’s pretty awesome out here right now. You’re right, I feel like the 90’s Bills. Punk Rock Football, in your face motherfuckers who are too good to win. People have been really nice and receptive and into things we’ve been doing. None of us quit our jobs yet, especially me. It’s hard to quit a job you don’t have. We don’t have roadies yet either, but the label is really the one dropping the ball on that. I’ve been talking to the reps about it almost non-stop. I keep saying “HOW DO YOU EXPECT ME TO PLAY THESE SONGS WITH ALL OF MY HEART AND SOUL WHEN I’M TIRED FROM LIFTING AMPS!? I AM NOT A SLAVE, I’M AN ARTIST, DO YOU HEAR ME?!,” which I think is reasonable, but they don’t seem to be putting in the effort. I usually ask them for another advance after that. Needless to say, we’ll be leaving the label as soon as our six album deal is up. And yeah, I’m preeeeeetty sure we made it.

JT: You are one beautiful, sweet, sensitive man, and I wish you all the best. Since I’ll be in Mexico getting that risqué surgery I’ve been saving up for when you play Buffalo on the 12th, I guess this is ta ta for now. But don’t worry! Much like your Rick, I have a Ryan who will be taking care of the show while I’m away fucking everything up. Love you guys. Be nice to my cats if you crash at our house!

MB: Thank you, John, I was going to say the exact same thing about you – you took the words out of my mouth! Say hello to Juan for me while you’re in Mexico, you’re in… alright hands with Juan. I will treat Ryan well, and your cats significantly better than that. Love you too man, hopefully see you very soon! Be well 🙂