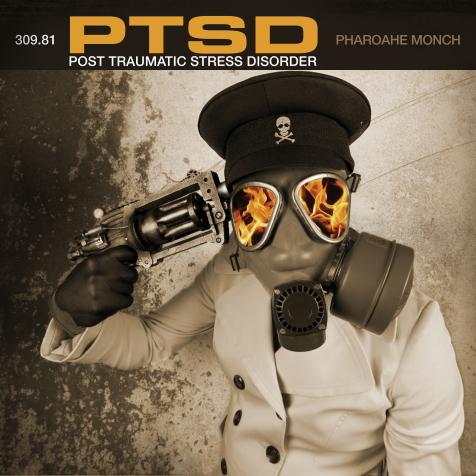 Pharoahe Monch’s PTSD provides a nice contrast from the usual super lyrical rap album. Monch has mostly been known for his lyrical dexterity and his technical rap skill, and as expected, that is all on display with this theme album. There is great variety in his flows throughout, and on a variety of songs Monch busts out tongue-twisting internal rhyme schemes similar to something MF DOOM would use.

Continuing on themes Monch developed in his previous LP W.A.R. (We Are Renegades), this album paints the picture of an artist who has battled with the music industry, and the aftermath of doing so. He talks of drug addiction, mental health, and even goes as far as to draw parallels between the Trayvon Martin incident and his plight in the music scene. Intermittently between tracks a computerized voice will talk to Monch, guiding us through the steps in his therapy. Each song provides a conceptualized idea, but for the most part nothing is in-your face

This album surprises with the quality of the instrumentals on nearly each track. Oftentimes we see an ultra-lyrical rapper like Monch sacrifice the beats in favor of the rhymes, but PTSD displays a pretty vast soundscape throughout. 3 standout beats from Lee Stone (“Damage,” “Bad MF,” and bonus track “Stand Your Ground”) provide some live, hard-rock instrumentation for Monch to vibe over, while the Stepkids give Monch a layered, dreamy beat on album closer “Eht Dnarg Noisulli.”

Pharoahe Monch enlists the help of a couple of legendary emcees with the songs “Rapid Eye Movement” and “D.R.E.A.M.” In the former, Black Thought of the Roots closes out the three verse song with a true lyrical assault of half-punchline braggadocio. With lines like “I bear arms like button-downs without the sleeves, manic depressive and possessive like apostrophes,” Thought incorporates the album’s themes in a discreetly intelligent way. Talib Kweli provides another complimentary verse to Monch on the song “D.R.E.A.M,” drawing content for his verse straight from the song’s title. Talib quit smoking weed, and it allowed him to pursue his dreams, or something along those lines. It’s not as hard hitting as Black Thought’s feature, but it is a solid effort in the context of the album.

With PTSD, Pharoahe Monch has created something rare: A lyrical rap album that is easy on the ears. The instrumentals on the project are a strength, complimentary in their role. Although they’ve had distinctly different career paths, Pharoahe Monch and Lupe Fiasco are relatively similar artists. They are intelligent, they have great rapping ability, and their subject matter is usually more advanced than the typical rap song. This album strives where Lupe’s Food and Liquor II couldn’t. The beats aren’t cluttered, the messages aren’t overly preachy, and the features contribute in a positive way. I wouldn’t call it an amazing album, but it’s a strong effort by a more than formable emcee.