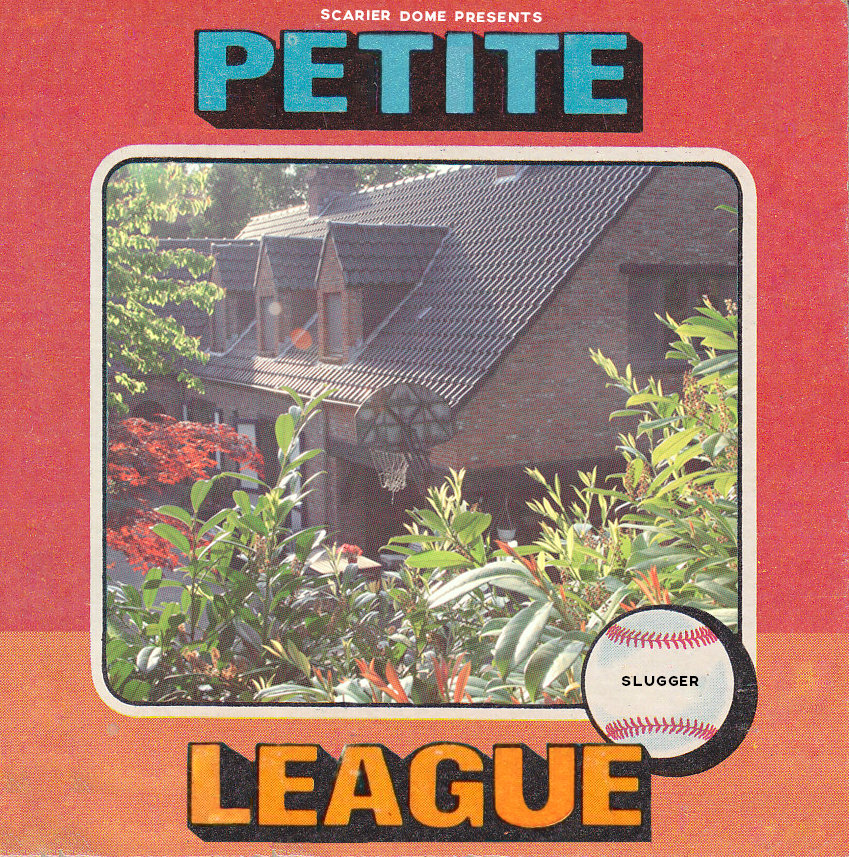 Baseball. Rock ‘n’ Roll. The Carrier Dome. Do those phrases resonate as “American” to you? Well, they should. And they’re three words that, more or less, resonate with the band from ‘Cuse known as Petite League.

Petite League is a lo-fi garage rock band currently inhabiting Syracuse’s scene. The band’s newest release is titled Slugger. When one pays a visit to their bandcamp page, they’re greeted visually by a collage of vintage baseball trading cards which easily blend with Slugger’s album art.

When you hit play on Slugger’s first track, “Ocean Honey,” you’re instantly transported into a basement in Syracuse with your cheap beer of choice in hand; accompanied by the smell of cigarettes, cheap whiskey, and the guy standing next to you. It’s garage-pop music for sure– in the same realm as early  Cloud Nothings, Ex Hex,  and Wavves. Each song brings an upbeat guitar riff– technical, yet not intimidating. Repeating melodies with simple, dry vocals, accompanied by variations of surf drum beats.

“Ocean Honey” is a quick intro track to the rest of the album. It features a palm-muted descending riff that quickly moves into a driven chord progression. That chord progression is joined by some “ahhh” vocals, and quickly dies out in order to give way to “Surviving October.”

“Surviving October” hits right away, A couple of chord progressions through and the lyrics take hold. “I don’t wanna taste your summer cum/and you don’t wanna taste mine.” It maintains the energy throughout a bridge, another verse, and then an even louder chorus.

“My Black Lungs” is another notable song from the album. It, like the previous excerpt, hits right away. “My Black Lungs” switches back and forth from stop-and-go lyrics spaced between swelling drum fills to driving full-band bridges. And, like most of the album, is bound to make you think about a certain period of your life. Or an ex-lover that never quite panned out.

Slugger is a summer album; but packaged perfectly for the winter. It’s warm and bright, and a profound local composition bound to keep you warm throughout the winter. Undoubtedly, it will bring you back to one of those college basement shows that allowed you to forget the stresses of learning. Or whatever stresses you were dealing with at that time in your life.

Lo-fi/garage is an easy term to use for a relatively new act starting up. So, to better explain the Petite League sound is this– fun music meant to take you away from whatever moment you’re in. Lorenzo Gillis Cook and Henry Schoonmaker make fun music, and Petite League is well worth a listen to from half a state away. Oh and the branding? The branding is great. Vintage Tops-style baseball card branding is severely underutilized.