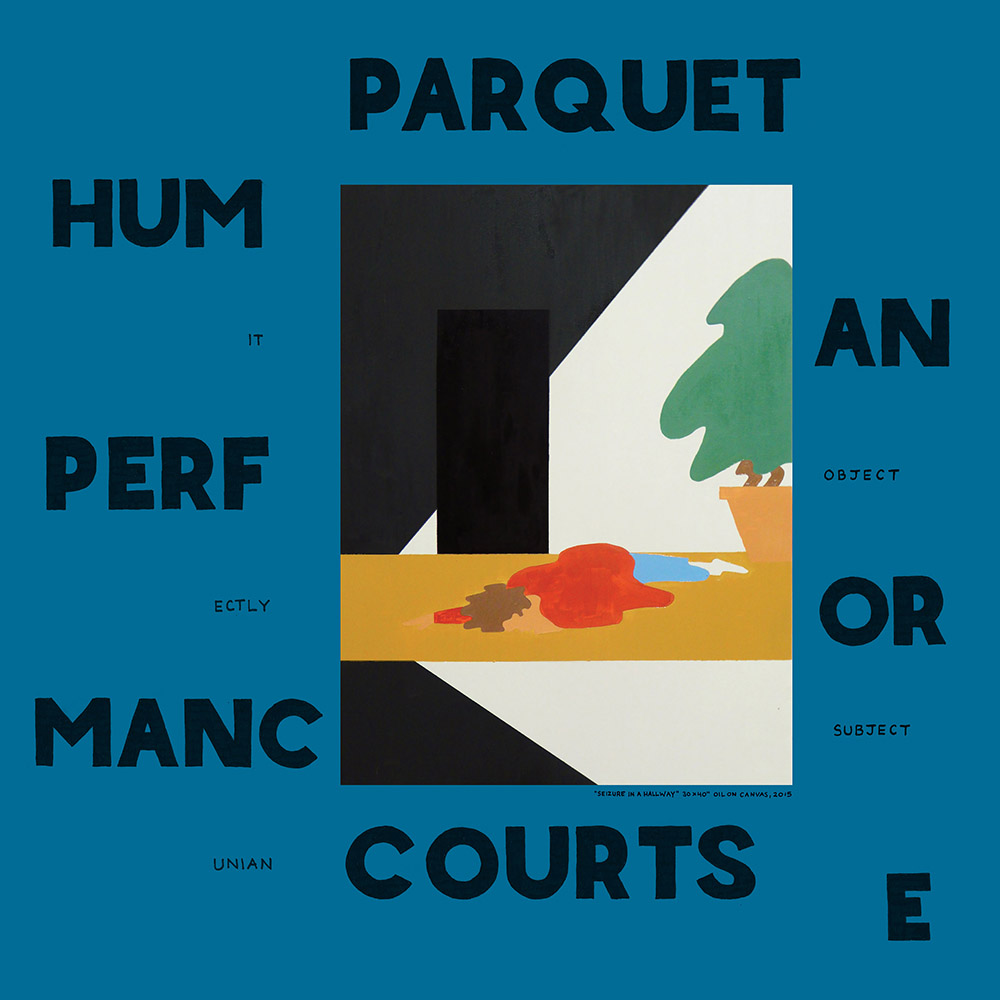 Parquet Courts is one of the rare rock’n rolls bands in the last couple of years to manage a consistent number of good releases in a short period of time. Coming from Brooklyn, they manage a good work ethic and have put out some actually thought-provoking music that isn’t too pretentious. When Parquet Courts first gained traction with their release of album Light Up Gold, it was apparent that this band was special. The quartet has succeeded by making good music with a genuine message that is unfortunately not commonly seen with many bands when they gain any sort of commercial success.

The lyrics Human Performance are poetic and that’s what is one of the many polarizing aspects of the band. The intro track “Already Dead” contains is good preparation for what is to come as it transitions into a small spoken word monologue reminding you to just relax wherever you are and enjoy the music. The next track “Dust” is pretty great for a song actually about dust. It’s a simple catchy song and Parquet Courts have proved they can make these successfully time after time. The synth and piano add nice touch to accompany the other instruments. At the end of the song there’s another one of Parquet Court’s signature specialties in their music where there’s a wall of noise in which spits you out onto a busy city street at the end

“Human Performance.” the title track of the album, is one of the band’s most personal songs to date. Co-lead singer Andrew Savage belting, “So fewer trials when a life isn’t lonely, and now if only. I’d never felt it; I’d never heard it. I know I loved you did I even deserve it? when you returned it” makes the song special in that the lyrics aren’t sung in an overtly mopey style while creating a poetic and emotional song. Following this is “Outside,” a single released prior to the album. It’s one of the poppier, catchier songs on the project. It contains a nice cohesive force where the band isn’t a controlled mess that sounds like it could fall apart at any moment like the band will occasionally make, and it shows their diversity as a group of musicians.

“I Was Just Here,” changes the pace with a song that is great, but it’s one of those songs that is really interesting because it sounds like it’s about fail miserably at any moment, but somehow succeeds in being a great song held together loosely by each note. The song goes onto finish with a tease of a punk riff. “Paraphrased,” is similar to “I Was Just Here” with more chanting and then going into fast guitar riffs to only be abruptly stopped in their tracks. The song is about living in a modern day New York City where it shows the always changing environment where restaurants and storefronts will be there one day and completely vanish in the next. Savage’s singing sounds fed up with a couple things, and he really wants you to hear what he’s singing.

The next track “Captive of the Sun” is another display of the band’s poetic lyricism where the band’s other singer Austin Brown sings “A drive-by lullaby that couldn’t get worse. A pastime streamer hanging from the rafters. I try to get out I don’t have fun, living like a captive in the sun.” Steady On My Mind” is another sentimental by these guys. The band has gotten really good at writing songs that have lyrics that are sad, but not cheesy and mounted in reality. Nice poppy guitar over a warm bass line as Savage sings softly presumably about a girl who he doesn’t talk too anymore, but still cares for.” One Man No City” covers the feelings of living in a city packed with people yet feeling alone. It’s been done a lot of times before, but it’s put together cleanly and then there’s a guitar solo that is one of Parquet Courts stranger talents where once again the song sounds like it could fall off a cliff at any moment, but at the time excellent and making the band unique and exciting.

“Berlin Got Blurry,” is the first single from Human Perforamnce. The western style guitar and jarring synth will have crowds loving this one. “No one’s fallin’ for that nice guy bullshit,” it brings some attitude and memorable lines. Perhaps the most cleanly played song on the album which makes it accessible, but still remaining as a supremely solid song. “Keep it Even” is a good softer song with great lyrics and a powerfully charged solo in the middle. It’s a comfortable and soothing song that lightens the mood a bit for the next song which is one of the more intense tracks. One of the albums more serious moments is on “Two Dead Cops” which touches on the serious situation where two cops were shot in Brooklyn last year in Savage’s neighborhood. The song is hectic in the spirit of many of Parquet Courts songs where they create these atmospheric songs that are crazily put together under nicely played punk-influenced guitar. The song keeps an even fast pace and feels like the energy that was spent writing it reflects the situation.

After this comes, “Pathos,” a bouncy and poppy song with a great surfy guitar solo in this one. “It’s Gonna Happen” wraps things up nicely with a slower and mellow guitar.

Parquet Courts does a lot with Human Performance, and they touch on a lot of personal issues and get emotional on songs without losing their intellectual touch that makes them so special to their fans. Savage reigns as one of the best lyricists in rock music right now and the band will no doubt be continuing to impress fans with upcoming release while still pushing the boundaries in the spirit of making rock music interesting.