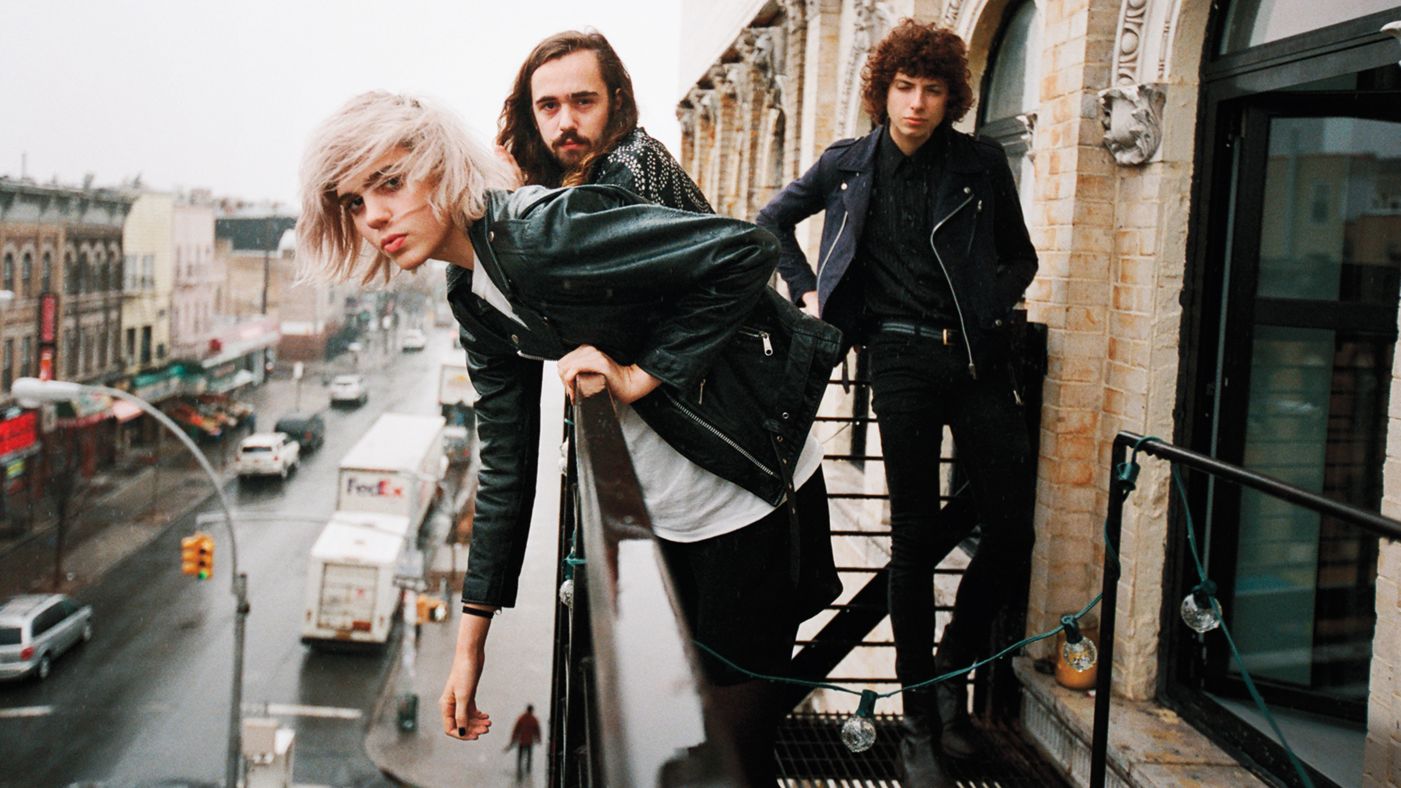 You probably wouldn’t wholly believe me if I told you that Sunflower Bean, based out of Brooklyn, NY, has existed for a measly two-years-and-some-change and that all three members have either just broken into their 20’s or are about to cross that landmark threshold within the next year.

I was recently able to chat with singer and guitarist Nick Kivlen to pick his brain a little about what this whole experience has been like for him so far.

bB: You guys just ended a ten week tour and have another tour lined up through the end of the year. Have you become accustomed to being on the road so much at this point?

Nick Kivlen: Yeah, very much so. Now that we’ve been back for a week, I kind of feel crazy being home. I feel like someone who’s been in prison and has finally gotten out and doesn’t know how to cope. It’s kind of sad actually. Sitting around watching TV or something isn’t how I enjoy spending my time so it’s rough. But we’re working on new music and it’s good to have time off for your creativity and your own sanity.

bB: So your debut LP Human Ceremony came out in February — what’s the feedback been like so far?

NK: Really amazing. The first night it came out we did an in-store show at Rough Trade and it was also Rough Trade’s album of the month. Then we played a secret show in London and the line was around the block. There hasn’t been a lot of drastic change, but our lives have changed a little bit, where now some of our headlining shows are selling out and they’re all very well-attended. It’s really exciting.

bB: Compared to your last release, to me, Human Ceremony sounds distinctly different. How would you describe the difference between the two?

NK: They were recorded very differently. The EP [Show Me Your Seven Secrets] was recorded over the course of a year and it was home recorded in my best friend’s basement. All of those songs except “2013” end with like a two minute jam, and it’s pretty excessive. It’s more of a psychedelic sounding record. The new one was recorded very concisely within 11 days by a professional so it felt like a completely different thing. We had a producer work on it who really helped us put our songs into more concise formats. And of course, it came out on a label, which involves a lot more people working for it, a lot more money being put into it.

bB: Aside from being on a label and the recording process, did you approach the songwriting process any differently?

bB: One of the things I really love about this new record is the lyrical style. This album tackles some pretty vast, sprawling themes like spirituality and loneliness, yet the lyrics are so sparse and open-ended. Is lyrical ambiguity something you intentionally strive for?

NK: I think it’s just how I personally veer when writing lyrics. I like to stay away from more literal stuff. I like that they’re kind of ambiguous — if you read them on paper they might not make any sense, but I think once you hear the music and the mood that the instrumentals create, they tell a story together.

There’s something to be said for lyrics that can stand on their own too, though. Me and Julia have pretty different styles when it comes to writing lyrics. She’s a bit more into matters that are more literal and the lyrics by me are more abstract. I have some rules that I use, too. I try not to use “I” and “you” as much as I can but it’s really hard to write lyrics without those two words.

bB: That’s such a unique way to approach writing — I try to do the same thing when I’m writing poetry or something and it’s a lot harder than you’d think it’d be.

NK: I know. Having a statement and not involve “I” or “you” is really hard to do because it almost seems like it’s coming out of nowhere. If you pay close attention to a lot of songs, especially from artists like Kurt Cobain, you kind of take them for what they are because paired with the music you know exactly what he’s trying to say. But when you actually read the lyrics on paper it seems like they’re coming out of nowhere and completely random. It’s as if you opened up a notebook and read two separate paragraphs from the middle.

bB: I think that’s something that plays to your advantage when you play live or even in your recorded stuff because it separates a single person from the subject matter and creates this vibe that people can take and really individualize for their own experience.

NK: Yeah, thank you very much!

bB: I’m sure you guys hear this over and over from media outlets, but you are a fairly young band. Not just in age but you’ve only been a band for about three years. Is that something that you ever stop about and think about in depth, or is it something you don’t even acknowledge or focus on?

NK: It’s kind of just our lives — being young, we don’t have any other life experience than what we’ve had so far. As far as the band being almost three years old, that’s crazy to me at this point. I’ve been out of high school for basically the same amount of time since the band started, and it really doesn’t feel that long to me. It’s a shock. It’s so quick in so many ways and so slow in so many ways. I feel pretty old [laughs]. By the time our next record comes out I’ll probably be 22, if not 23, and that’s a lot different than having a record come out when you’re 20.

bB: It seems like Sunflower Bean has been working at a really fast pace and at a high caliber since the band started, and not everyone gets to experience that right out of the gate. What do you attribute that to?

NK: We’re very lucky. Artistry and stuff like that aside, I think it’s because of our backgrounds. Me and Jacob both grew up in Glen Cove and started playing in bands at the age of 16 so I knew tons of people involved in music in Brooklyn. We were both playing in another band that was gigging pretty regularly.

Julia grew up in Manhattan and was in a group that did a European tour when she was 14, just by chance. We all grew up doing this and have learned from the last few acts that we’d been in. No one really knows what to do to make yourself a success but you have these instincts that come easier when you’ve already been doing it from a younger age.

When I was a freshmen in college, I ended up booking us like two or three times a week and we ended up playing probably about 100 shows just in New York in a year. At the end of that year we ended up at the top of the list for the hardest working band on Oh My Rockness — and the number they clocked in was so much lower than it actually was because they didn’t list some of the DIY shows we played.

That’s the number one thing for any band to do. Just play. It’s positive in every way. It helps you learn how to perform, helps get your name around, gets you a fan base. There are only upsides. I think when bands start, they should play as much as they can in the first year.

bB: Speaking of shows, you guys have already played with some incredible, well-established bands. If you could assemble a dream tour, who would you put on the lineup?

NK: Aw man, we have one that’s already in the works, one of my favorite artists ever. But I can’t say it, I really can’t say!

We did a tour with DIIV and No Joy recently. DIIV are good friends of mine and when I was 16, they were getting really popular so they kind of taught me how to be band. I followed their example and it was a lot of fun going on tour with them. We’ve supported a lot of really cool bands and people.

bB: What current bands are you into right now?

NK: I’m really into Sheer Mag. They’re one of my favorites. We went to see them at SXSW and because they were playing the inside stage while Erykah Badu played the main stage outside, we waited in line for two hours and we were one of the only 50 people there to see Sheer Mag while everyone was there to see Erykah. It’s probably the most I’ve done to see a group.

bB: What are the plans for your second full length?

NK: It’s in its beginning stages but that’s the most intense stage for me. I conceptualize most of the ideas early on and then bring them to Julia and Jacob. When we play full band, that’s when the songs become how you’ll hear them on the record. Even though I’m home, I’ve been writing every day and we write during sound checks too. I have a tentative tracklist written down but that’ll probably change a year from now. I think it’s gonna be better than our first record for sure.

bB: It’s awesome that you guys are already stoked to get going on new stuff even though your LP came out so recently!

Kivlen: Yeah even though the record just came out, we’ve been playing the songs from it from the past year, so we’re all just personally ready to start playing and writing new songs.

You can catch Sunflower Bean in Buffalo on Sunday, May 8th at Mohawk Place.