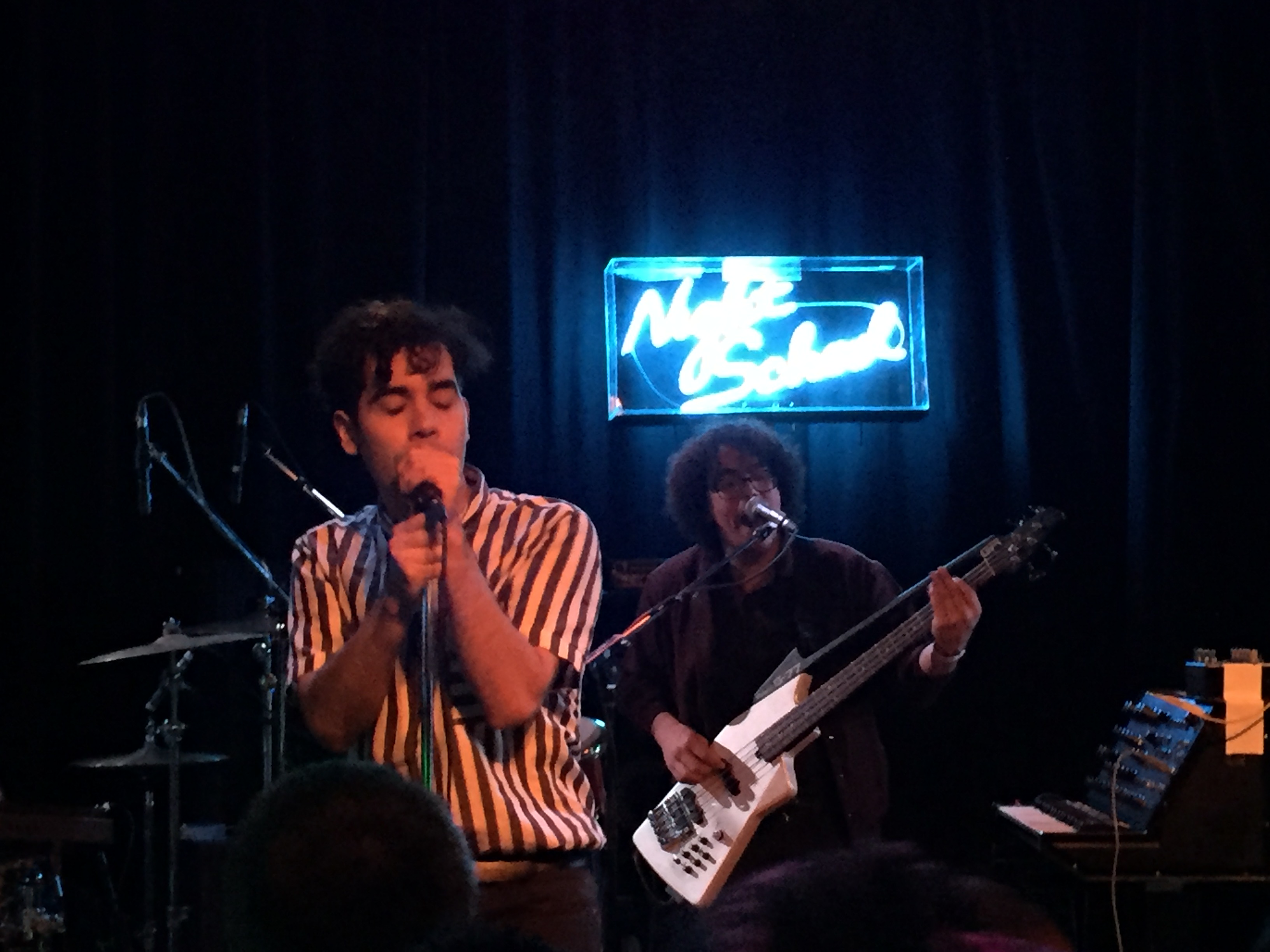 In a year of live music treats, Friday night has to stand out thanks to the much anticipated return of Denton, Texas electronic funk outfit Neon Indian to Buffalo after a five and a half year absence, along with truly excellent opening support from Explorer Tapes and Lesionread. Any hard feelings (there really weren’t any) would be completely forgotten, wiped away by an electro-funk heavy set that took the crowd to Night School and turned the Tralf into an 80’s dance party.

Explorer Tapes got everything going right with a gorgeous and aching set of Brian Wilson meets Lindsey Buckingham influenced 80’s yacht rock. The duo of Max Townsley and Drew Erickson, also from Denton, impressed the seated Tralf audience with plaintive and sweetly expressive harmonies, Buckinghamesque guitars and dreamy sythns, making the place feel like a nightclub on a cruise ship, which was perfectly simpatico with the headliner who’d composed some/most of his current album hanging out with his brother on a cruise ship. When they returned later in the show as part of Neon Indian’s touring band, the crowd was all for it.

Back from his first national tour, Lesionread (aka Sean Lewis) wrapped up 2015 with a terrific set, moving up the bill and winning over yet more fans with his “in your face” electronic art spectacle. It was genuinely entertaining watching him face a largely unfamiliar, skeptical crowd totally unsure on what was going on: should they dance, let alone dance with the person in the dragon costume and allow Lesionread’s red suited minions to hug them? More and more of the crowd surrendered to the beats and freewheeling experience, and by the end of the set pretty much the entire floor area was getting down. The tactile, frequently mesmerizing, and hilarious set ended on a beautifully affirming note when the non stop bonkers video projections ended with a card saying “Lesionread Art All Day RIP 2012-2015” and somebody yelled “DON’T DIE!” at Sean. Well said, and I can’t wait to see what’s next.

After some tasty 80’s dance instrumentals, the fellows from Explorer Tapes reemerged with Alan Palomo, drummer Jason Faries and his brother on bass, a neon “Night School” sign was fired up, and Neon Indian launched into the chilled out funk of “Dear Skorpio Magazine,” the reggae flavored lead single “Annie,” and a transcendent “The Glitzy Hive.” Palomo’s new fondness for sing along choruses on the just released VEGA INTL. Night School had the crowd singing, and the albums abundance of electro-funk got dance party began in earnest.

The funk continued with Psychic Chasms’ “Terminally Chill,” one of the few non VEGA INTL. jams of the night, before launching into the fuzzed out and skeezy “Street Level” and “61 Cygni Ave.” “C’est La Vie (Say The Casualties)” was a full on Prince rave up that got the crowd crazy before getting cooled off by the super chilled out classic “Mind Drips,” while the retro-futuristic “Slumlord” and “Slumlord’s Re-Release” were straight up epics, movie soundtracks without a movie. “Baby’s Eyes” one of the few ballads on VEGA, gave Palomo a chance to show off some a falsetto dinged only slightly by illness before a rousing “Deadbeat Summer” closed out the main set with a lusty sing-along.

After a pleasantly brief break, the band came back (as promised) for a potently exuberant “Polish Girl,” unfortunately the only song off Neon Indian’s 2011 Era Extrana (I was kind of hoping to hear “Hex Girlfriend” too), which sent the crowd into a certified frenzy before “News From The Sun” ended the night with it’s warm and sumptuous homage to mid 80’s Prince. It’s strutting funk, sweet soul claps, and gospel tinged choruses tied the whole beautiful night together and lifted the audience up before the house lights came up and the real world beckoned.

Even without the thoroughly psychedelic laser light show that I was really looking forward to, scotched by technical difficulties, Neon Indian delivered next level fun, emptying the table seating areas and filling the dance floor with transported, sweating bodies. Having promised to be back in town sooner than five years from now, if Neon Indian wants to come back next year while still touring behind the exceptional VEGA INTL. Night School and play the Town Ballroom (so we can get the full laser light show), that would be a can’t miss experience, and I’ll be there in a heartbeat to get in on all the joy, and funk. Bet on it.