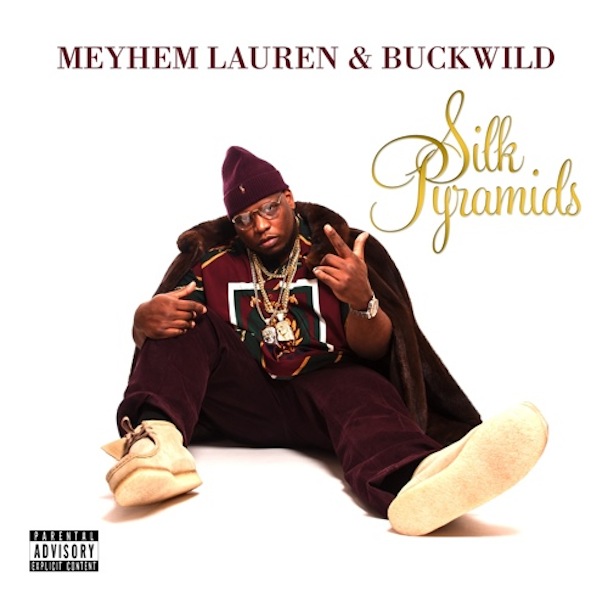 “So Queens that you could feel me, so dope that you could deal me.” That’s what NYC rapper Meyhem Lauren asserts on the opener of his latest album Silk Pyramids with producer Buckwild, and that’s the script that he sticks to for the length of this impressive project. Lauren doesn’t break any ground with his subject matter on this, but he does a great job rapping about rap stuff.

Action Bronson, a past collaborator with Lauren, assists him on the album’s intro, and he really kills it. The beat Buckwild crafts is straight up Bronsolino’s alley, a female vocal loop that sounds like it’d fit right in with with Bronson’s “9.24.11” and “9.24.13” series. Action always comes through with the ridiculous braggadocio bars. He provides the album’s first rewindable moment with the line “Cross your motherfuckin ass in basketball wearing sandals.” Murked.

One of the album highlights for me, and I think the best exclusively Meyhem Lauren track, is “Can’t Fuck Em All.” On here, Lauren hilariously narrates his sexcapades, dropping bars like “I’m a hustler so I’d rather bag a brick than a chick,” and “I stole your heart, you prolly wish I took your purse from you.” The framework for this lighthearted song definitely comes from Buckwild’s use of a nice upbeat jazz sample, one of the more memorable beats on the project. The end of the beat also transitions nicely into the next track, “Narcotics Anonymous,” featuring Heems (formerly of Das Racist).

This one of my tracks of the year thus far. The layout of this song is Meyhem is the dealer and Heems is the druggie, and Meyhem takes the first half of it. One thing he really proves on this record is how creative he can be with his bars, without having to go way over heads. Socioeconomics has lead to a lot of rappers talking about selling drugs (like that jump?), and with a lot of rappers talking about the same thing, lines and ideas for lines get recycled. Meyhem Lauren sticks out in that he’s talking about this same stuff, but it has a freshness to it unlike what you’d usually hear from a drug rapper. The line “I don’t use em to get high, just to get fly,” is so simple yet works so well. In 2014, he was able to come up with a “high/fly” rhyme that was original, and that is crazy to me.

On the other side of the spectrum is Heems, who has somewhat of a reputation of being a drug abuse. I’m not hyperbolizing when I say that it’s probably the best I’ve heard this year. Himanshu details his drug use, and his path to his drug use in a morbidly honest verse, with passages like “If I don’t shape up, I’m dearly departed, find your boy dead stinking up the apartment. I guess drinking’s where it started. I was 13 yo, I thought it was jiggy son, rolling round drinking Cisco and 151, Now I’m almost 30 and I’m worried bout my liver, makes me shiver so I pray to Shiva.” It’s almost uncomfortable to listen to, but it’s such a great verse, especially given it’s context in the song and album. The verse is a pretty awesome twist I’ll leave out so you can just hear it unfold yourself.

2014 XXL Freshman Troy Ave gets a guest spot on the 8th track, “Street Hop.” It’s okay. He’s a coke rapper, and he didn’t really do anything on his verse that Lauren hadn’t already done better. He has one of the cooler voices in rap though, it’s higher pitched kinda like Meek Mill, but he always keeps his flow mellow compared to Mill’s constant state of yelling on the mic. The other guy featured on this song is Retch who I had never heard of before, but he came through with an noteworthy verse. His flow sounds really gremlin-y, like he’s so mad he can’t really talk, and that’s how he goes at his verse. It’s unique, but after about 5 listens I still don’t remember any of his bars.

On “Aztec Blue,” Buckwild uses the same Cortex sample that MF DOOM used on “One Beer.” I am of the opinion that once a sample gets used on a classic hip hop song, it should be off limits, because although Buckwild did a noble job on the sample, I was just thinking of DOOM the whole time.

I think that this project is a great example of New York hip hop in 2014. Lauren came through with some really great bars, and this project featured some of the most tweetable lyrics I’ve seen this year. Buckwild’s beats also had the New York feel to them, the songs “Love and Loyalty,” “Narcotics Anonymous,” and “Where the $ At” in particular. The songs with features were definitely the most memorable, especially the Bronson and Heems joints. Although Meyhem brought the lyrics on every song, a song like “Q.U. Cartilage,” doesn’t have enough else going for it for me to go back to it. The great songs were really really great, but the album could’ve lost one or two and I think it would’ve helped the overall product. It’s definitely an album worth checking out though. Stream it below.