Meric Long of The Dodos 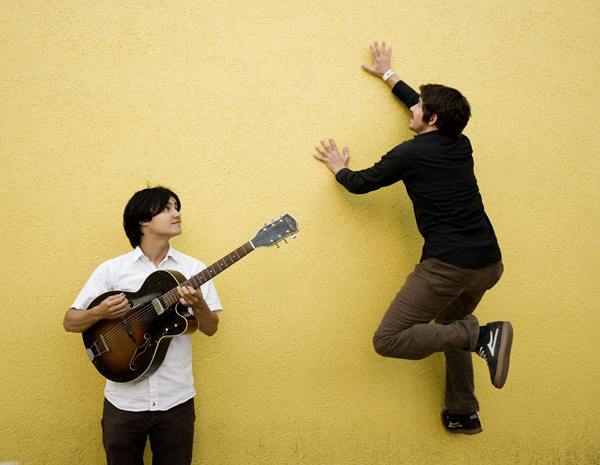 After six full-length albums and 10 years under their belts as The Dodos, Meric Long (guitar, vocals) and Logan Kroeber (drums, percussion) have something to be proud of. The duo crafts a signature strain of rhythmic indie rock, lying heavily on technical proficiency such as intricate strumming patterns and intense polyrhythms. Their latest album, Individ, capitalizes on these aspects to deliver some of the best-rounded Dodos songs to date.

We caught up with Meric and snuck in a few questions before the band’s Buffalo visit brings them to the stage of Mohawk Place later tonight.

buffaBLOG: Compositionally, did you approach your latest album Individ any differently than your previous work?

Meric Lonh: The approach was pretty carefree with the one focus being that the songs be exciting and had parts that would push the limits of our abilities.

bB: The interpretative dance in the “Competition” video—did you work with a choreographer? Tell us of your preparations.

ML: Katie Gaydos did the choreography, but it ended up being quite collaborative since we were limited by our capabilities. It was a lot of prep, I kind of had a health renaissance just trying to get in shape for it.  It was all one take and boy were we sore the next day.

bB: There’s a lot going on in the artwork for the album. Can you tell us about it?

ML: We’ve known Victor Cayro for a while and he’s always been pretty out there with his work, lots of “taboo” things I suppose. He reigned it in for us a bit but I’m glad he was able to sneak a big red devil butt for the inside cover.

bB: Thematically, the new album takes on an air of resilience. How did this concept find its way into the record?

ML: Lyrics mostly, but I’d say the album has a sturdy sound, lots of girth.

bB: Of your extensive catalog, what are some of your favorite songs to play live?

bB: Individ marks roughly 10 years for The Dodos. To what do you owe your longevity?

ML: Being in this band for 10 years or more was something I certainly didn’t think about when we first started. There have been many moments along the way where things could have gone a different way but by some outside factor we were steered back into doing more so some it’s luck. But I think ultimately there are certain kinds of songs that I write this band is best suited for and that kind of song I seem to always come back to. I want it to be the best it can be, and Logan and I happened to be the most qualified for the job.

The Dodos take the stage at Mohawk Place. Doors open at 8pm and tickets are still available for $14. Moody Cosmos are set to open.