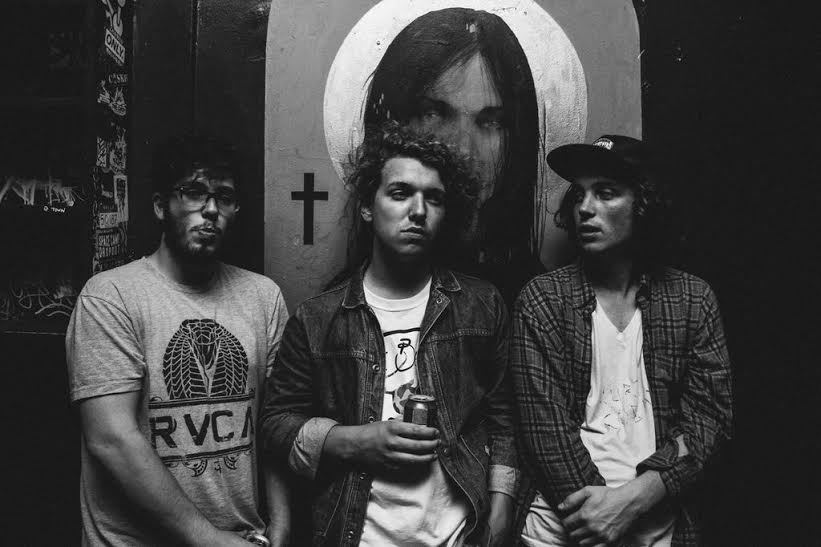 You desperately want to give the boys of Made Violent a bath. They’re not hippie dirty, nor are they ‘I’ve been candy flippin’ and shitting in my own hand for three days at Bonnaroo, dirty.’ No they’re just grungy. They’re filth-chic, if you will. They all sport wild manes and patchy beards, however bassist/vocalist Joe White’s mane is most Mufasa-esque.

The trio has set up shop in the basement of a cottage in Colden, New York. The cottage sets far back from the road, with a quarter mile driveway surrounded by trees on both sides, which leads up to a two story cottage. To the right of the driveway is a pond, filled with fish and a snapping turtle. The cottage lives on the opposite side of the driveway. Behind the cottage sets another patch of trees, which hides two other structures, one which resembles the house from The Walking Dead just a little too closely.

The basement, where the band has set up shop, is a cramped setting, but it seems to work. “This is home for the next few days,” drummer Justin Acee says from behind his kit, which has the band name written abrasively across the outside of the bass drum. In the far corner of the room sits a makeshift desk with a Mac laptop. A microphone is rigged up just above Acee and his kit. Guitarist Rob Romano and White’s microphones are set up so close to one another, they could give each other a sensual kiss between verses.

White lounges back in an office chair eating a peanut butter and jelly sandwich, attempting to soak up some of the alcohol swishing around in his belly after a drunken bocce game. He picks up a moleskine notebook that lies on the desk, next to the laptop.

“What this?” he ask with his mouth half full of PB&J. “Oh, this, this is the bible.” he says, coyly with a smile. “It catches every glimpse of hope coming through the cosmos.” he says behind yet another coy little grin that only Andy Kaufman could love. “It has all of our songs in it. We play something we write it down.” he finally says very bluntly.

White finishes his sandwich and makes his way across the pseudo-rehearsal space, stepping over a slew of guitar and microphone cords. He slides on his bass guitar. “We rehearse like we play,” he says, “so we’re going to go ahead and bring out all of the animals that we slaughter on stage.” adding with a smile.

Made Violent are a band from Buffalo, but they never seem to be home. Regrouped and reformed as of this past November, the trio has managed to create some serious buzz for themselves in the past eight months. They now have five singles underneath their belt: “Wasted Days,” “Inside Out,” “Dirty,” “You Had It Easy,” and “Talk About It.” The latter two have been released in a physical form. “It’s kind of new, but we’ve always played together. But this time it’s different. Some homie would write a song and we’d play it. We weren’t writing our songs as a collective. We just kind of shut up and did it.” White explains. Acee adds, “Whatever somebody has, we just write it down. We do a lot of phone memos, and we have a group text. What we really want to is release a full length.” he proclaims. “Oh absolutely.” White concurs. “We’ve been playing together for eight months. It’s crazy, there’s just a lot of stuff going on. It’s hard to keep up with it.” Acee says.

Between write ups in the UK magazine NME, air play on both Dutch and German radio waves, a short tour in London (currently underway at the time of this posting), not to mention attention from New York and New Jersey, it seems like everyone else except for Buffalo is aware of the band. “I’d love to tackle Europe. I guess our only goal,” Acee says with a laughs “has always been to play over there. Just because our favorite bands are from there.” White adds, “Hopefully we go there, get good reviews, and I can quit my day job before they fire me.”

It’s not because they don’t want to play in Buffalo. Acee explains, “We all wanna play house shows around here.” he explains. “We just don’t know the people to do it. We get all of these out of town shows handed to us. I will always be down to play a house party, but it’s just been we get asked to do these shows out of town, more than we get asked to do shows in Buffalo.”

One place where you won’t see Made Violent anytime soon though is Canada. The band was recently denied entry into the country to play a show in Toronto. It was because of a legal mix up, something that Acee is in the process of dealing with. “Their whole spiel was ‘if you can sell out Air Canada Center, we’ll let you through. No problem, no questions” Acee says, adding, “I did tell the border patrol when they refused us at the border that in two years they’d regret not letting us over the border.”

Buffalo is an anomaly as far as music scenes go. It’s very incestual. There are great bands that never manage to leave the Queen City. Made Violent are an anomaly in Buffalo; the three members don’t play in other bands, and they leave Buffalo frequently. They have people behind them, a manager, a publicist, and a booking agent, and as you read this, they are playing in London, at The Old Blue Last.

Made Violent, just want to do things a little differently. Acee says, “A lot of the time for us, it’s just been we like to do our own thing, because it sets us apart. We want to be the best we can possibly be, and we’re going to do whatever we can that’s going to help our band the most.” Like going to London. “If we can play with anyone from Buffalo and have a good time, then great. I don’t hate on that whatsoever, but in the term of things I think you’re always looking out to make sure you get to jump on the next best thing. We want to proceed and progress as far as humanly possible because I don’t want to work at Olive Garden forever.” Acee says. “I want to play everywhere. I want to play California. I want to play Austin.”