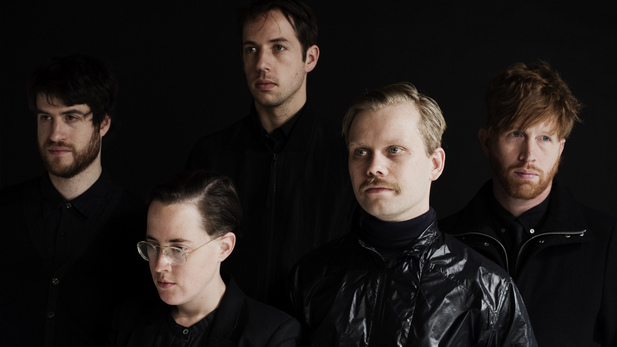 Baltimore’s Lower Dens have carefully balanced experimental, cerebral inclinations with a strong melodic sensibility throughout their career. Their third LP, Escape From Evil, released earlier this year on Ribbon Music, finds the band in full-fledged pop territory, drawing from the sounds of the 80’s to make for a nostalgic, emotionally direct record that finds lead singer/songwriter Jana Hunter comfortably exploring pop themes, her voice featured prominently both sonically and lyrically. We had the chance to speak with Hunter about the new album leading up to Lower Dens’ performance tonight at Mohawk Place.

buffaBLOG: Escape From Evil feels more succinct and focused than the band’s previous work, was there anything that inspired a more intimate approach both sonically and lyrically?

Jana Hunter: I wouldn’t call it intimate. It’s direct. It’s simple. It has a simple message (for a thing I’d write anyway) about keeping things simple. We’re complicated. Our lives are too complicated. We just want our family and our friends and maybe our job, but we’re also convinced we gotta buy things and live up to expectations and act right and all this nonsense. Our whole society is overly complicated with nonsense ranging from the mildly annoying to the purely evil. That’s what inspired this record. I want my family and my friends and my job and I want you to have those things, too.

bB: Working in isolation during the early stages of writing the record, did you consciously decide that the albums’ transparent, personal subject matter was more effective as a more pop-oriented sound?

JH: Yes. Pop is the lowest common denominator. And it’s fun. Pop is fun, and it’s a challenge to write. Writing music that can hopefully have a broad appeal that isn’t also pitiable is hard. It’s easy to get it wrong. So many people do.

bB: Were there any non-musical influences from either Baltimore or your time on the road that influenced any of the songs on the album?

JH: Everything. Every single thing that happens to somebody influences what they do. Today, I bid on some EBows on ebay. If I win them, they’ll probably show up on the next record. If I don’t, I’ll probably forget about them until we’ve already tracked all the guitars for the next record. The chorus pedal I use on everything I bought in a local record shop for $20 on a whim. Some of the songs are probably better than they would’ve been if I’d been in a better mood the day I wrote them. There’s a book called Escape From Evil and another one called Within the Context of No Context that are both incredible and had a big impact.

bB: Your past albums, specifically Nootropics, seem to have been accompanied by intellectual conversations. Were there any similar recurring ideas or discussions you had?

JH: We talked a lot about how hard people work just to scrape by and what a scam that is.

bG:  Escape from Evil is very much inspired by the sounds of the 80’s, is there any other era or genre you could imagine Lower Dens being drawn to in the future?

JH: Yes, any of them. We all like classical music and jazz and some of us are big fans of old-time or hip­ hop or noise. Genre has become an outdated mode of categorization for new music, and sooner or later we’re gonna have to abandon it all together. As far as “era” goes, everything is recycled at a faster and faster pace and it seems like as these two processes converge, we’ll have more and more music that defies categorization as a means of description.

bB: Exploring the concept of transhumansim on your last album and now dealing with the limitations of human interaction on your latest record, how would you describe the thematic relationship of the two?

bB:  You’ve stated that your intent while recording was to make these latest songs as fun for you and the band to play on tour night in and night out, what allowed you to take a different approach in your performance style and which songs from the record best represent the change you we’re looking to make when playing live?

JH: We worked hard to make songs that are fun, then worked hard to make them sound amazing, and I stopped playing guitar as much so I can move around a lot more. “To Die in L.A.” works very well. It’s incredibly fun to play. And “Société Anonyme.” I dunno. They all work. It’s a great show.

Music tonight starts at 8pm, with Baltimore rapper Abdu Ali opening the show. Tickets are $12 and can be purchased here.