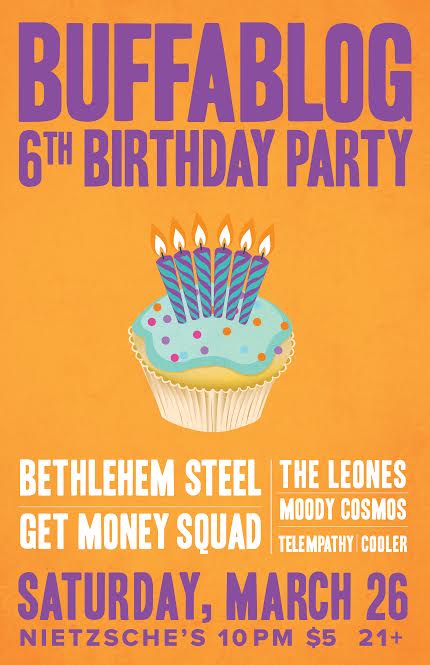 It seems like just yesterday that buffaBLOG was obsessively writing about Love Scenes, The Bird Day, and Arctic Death, but after checking the site stats, it seems as though this was five plus years ago. This means we are turning six. It’s time to celebrate.

Please join us on Saturday, March 26th at Nietzsche’s where we celebrate our existence as an all-volunteer blog that is just really into the Buffalo music scene. On the main stage this year we have trippy-sunrock act, The Get Money Squad, along with support from Brooklyn-based fuzzy sweetness Bethlehem Steel (fronted by former Buffalonian Becca Ryskalczyk), dreamy psych-folkers The Leones, and the night started off by scene newcomers straight from 2002, Cooler.

On the way to bum cigarettes we got you covered. At the front stage we will have a karaoke set by psych-y Fredonia art student, Moody Cosmos. Starting off the night we will have super mysterious newcomer Telempathy, whose lo-fi one-woman-band will surely pair well with $3 PBR’s.

Doors will be at 9pm with the fun starting soon after. Don’t bring any gifts. Just $5.