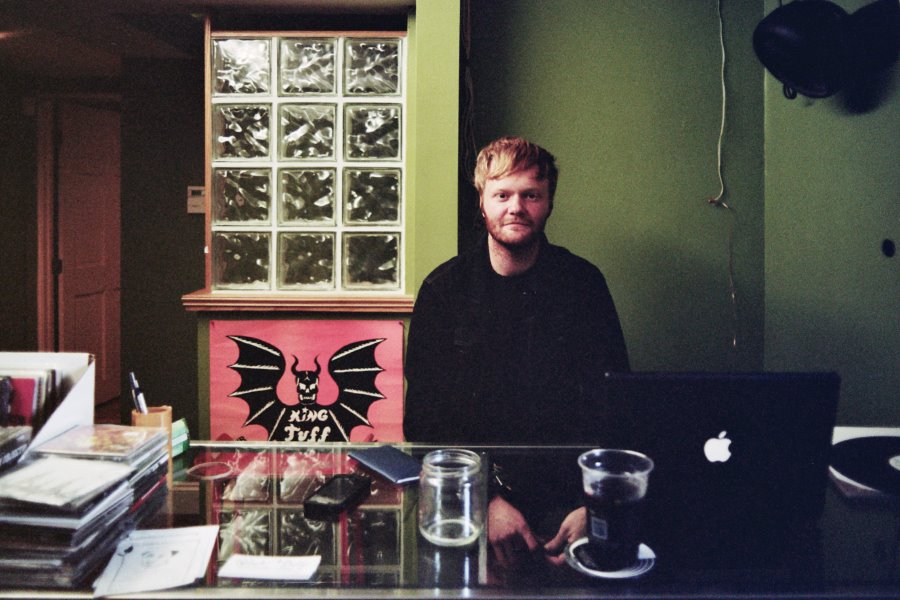 You have most likely walked by it a thousand times. You’ve probably totally ignored it, like it was invisible, like a vagrant. If it was a two headed mythological serpent of the future, it would have offered you it’s forbidden fruit. It sits drunkenly on the corner of Grant Street and Lafayette Avenue, like Dylan Thomas over a typewriter, directly across from Sweetness 7 Cafe. I am of course talking of Black Dots record shop.

If you have ever wandered into the basement record store, you are familiar with it’s owner Joshua Smith. Smith can usually be found sitting behind the counter with the glow of his laptop dancing across his scruffy face.  Always sporting jeans and an obscure punk T-shirt, Smith will give a gentle nod as you enter the store, and calmly go back to his computer. He has a quiet demeanor, but if you can engage him, you will quickly discover he is a walking, talking encyclopedia of underground punk knowledge. He’s kind of like the ‘Rain Man’ of hardcore, minus the obsession with Alex Trebek.

Smith can tell you every member of every band in the Western New York punk scene, past and present. It’s that same punk scene that got Smith into records in the first place. “For me, it was that’s just what punk was,” Smith explains. “When I first started going to shows in Rochester and Syracuse, [punk bands] would all put out 7 inch records.”

This all seems like the perfect prelude for a guy who owns and operates a basement record shop in the gritty West Side of Buffalo. Black Dots is rapidly approaching its first year anniversary.  “We’re coming up on a year, the week after Herd Fest. I didn’t want to do another show after Herd Fest, but I’m going to do a sale or a cookout or something.” Smith says. “Last year, it just so happened to fall during the Grant Street Festival. We had some weirdos walking in, and I didn’t even have a sign at that point. So it was just all word of mouth,” he says on the store opening.

Smith kind of fell into opening his own store. A fairly recent transplant to Buffalo from Syracuse, he initially worked at Spiral Scratch upon his relocation. “I worked there for like two months,” he says. “When I moved to Buffalo, I didn’t want to necessarily start a competing store. People were like ‘I don’t know if Buffalo is big enough to support two stores, so I tried working over there and it didn’t work out.” he adds. “But from what I hear about how well Dave’s doing, and how I’m doing, Buffalo definitely can support more stores.”

Record stores are all about neighborhood. Spiral Scratch lives down a side street in the Elmwood Village: a place where Gen-Xers can feel safe and comfortable on lazy Saturday mornings, grabbing records, and a Lloyd’s breakfast burrito. On the West Side, kids and resistant elders can go to Black Dots and find all  kinds of obscure hidden treasures after grabbing Ethiopian food from Lucy’s.  No matter how much he loves his neighborhood, Smith has no illusions Black Dots’ location. “This neighborhood can get a little dicey at night. I still see some shit. I see cops all over the fucking place. There was a shooting just down the block on West Delavan last summer. Then I just saw these guys getting chased by a bunch of other dudes with bats the other day, so it’s a pretty wild neighborhood, but I kind of like that,” he says with a laugh.

Black Dots isn’t just a record store, though. It’s also a label, as well as a music venue. “It’s a small space, but it works,” he says. Black Dots recently re-released a demo by Tied Down, and will be featuring a new release by Tank and a 12 inch release by Cages, the latter being a band that Smith never saw himself dealing with. “They’re like this weird, neo-folk, ambient noise music” he explains. “I never thought it would be my cup of tea. When I first started releasing records years ago, I was like ‘oh I’d never do anything like that,’ but they are one of the best live bands that I’ve seen in the past couple of years.” Smith is looking forward to working with more bands, but wants to keep things as local as possible. “Yeah, people send me promos and shit like that, but I pretty much just want to work with bands that I know personally. I want to keep it strictly Buffalo and or Western New York. I’ve always just put out records of bands that either I’m in or I am close friends with.”  he says, adding “There’s some great bands in Buffalo right now. I’m just going to keep it as a label that is centered around Buffalo.”

Along Smith’s extra-curricular activities, he will also be will be hosting a daytime showcase for Herd Fest at the shop, on Saturday June 21, which will include performances from Whetdream, Ranch, Tied Down, and Rotten (UK). “I think it’s a good start. I’d like to see how big it can get. I think it has the right idea. I think it’s cool that everyone is getting to put their own personal touch on the shows, that they were like ‘hey book a show, do whatever the fuck you want’ and I think that will cause a good lineup.” Smith says on the festival. “I really want to see it grow.”