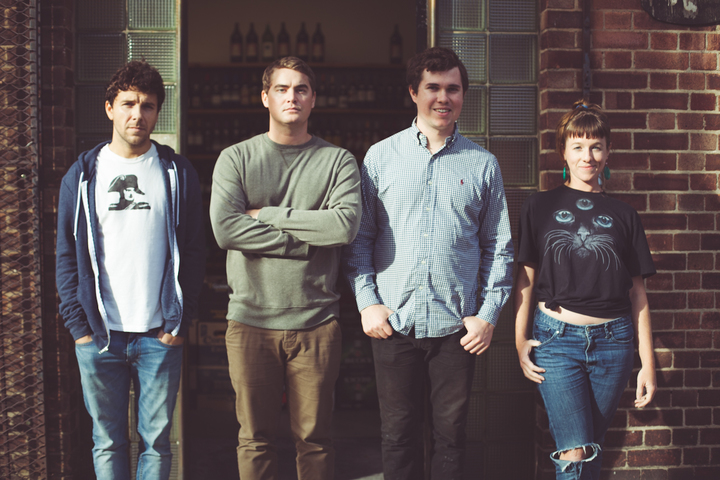 Surfer Blood’s career kind of seems like a one giant surfing metaphor. They hit the ground running in 2010 with the help of the CMJ Music Marathon and have continued to tour and consistently release quality material since then. From playing huge bills like the ATP festival curated by Pavement, to coping with news of longtime band member Thomas Fekete having a rare form of cancer, you can bet that they’re learning to ride the rip current as gracefully and professionally as possible (despite none of them actually being surfers). I was able to speak with singer and guitarist of the band, John Paul Pitts, earlier this week about how life as an industrious band has been since taking the drop down the face of indie success.

You can also catch Surfer Blood tonight at the Town Ballroom opening for Nate Ruess of Fun. More details and tickets for tonight’s show can be found here.

buffaBLOG: You guys are currently on tour, how’s it been going so far?

John Paul Pitts: So far so good. We’re a week in right now, we’re doing some of our own shows and a few in support of Nate Ruess. So far everyone’s been really cool. It’s been a very low key and fun tour for us.

bB: It seems rare to see you guys not on tour — you’ve been touring non-stop for the past few years pretty much.

JP: I feel like we definitely tour a lot more than a lot of other bands. We’ve been doing it on and off for 5 years without any real time out unless we’re recording stuff, but we like to stay busy and we like to travel. It’s good. The more you play, the better you get.

bB: So you’re pretty well adjusted to being on the road all the time at this stage of the game then?

JP: I think touring has definitely become much more natural and second nature than it was years ago. We have a new bassist with us, her name is Lindsey, and explaining to her all this tour stuff, I’m like, wow, I really do take a lot of this stuff for granted. But it’s been so long and you don’t realize how much you grow or how much your band has changed or evolved when you’re in it every day. It’s nice to take a step back and see what you’ve accomplished so far.

bB: Your new album 1000 Palms has been out for a couple months now. What’s the reception of it been like so far?

JP: 1000 Palms is definitely a grower that needs to be listened to more than once, but the more we play songs from that, the more I see people’s faces light up and that’s a big part of the reason why we do this year after year. I feel like people are really starting to warm up to it.

bB: You guys have released three full length albums and an EP in the span of 5 years which is not an easy feat. Do you feel like your sound has evolved in any significant way since Astro Coast?

JP: Our sound is constantly changing and evolving. I think all of our records are kind of different from each other. They’re all kind of like little islands on their own. I like it that way. I guess the development on this record is sort of scrapping traditional song structures and trying out different production techniques. There’s a lot of attention to detail on this record that wasn’t necessarily around when we first started. I feel like Astro Coast is a 23 year old kid throwing all of his favorite ideas from his favorite bands at the wall and seeing what sticks. These [new] songs make use of our sonic palette a little better.

bB: How do you think your writing process has changed as a band?

JP: Well, it’s more collaborative now than it was in the past. Astro Coast was me locked in a room working on stuff. This record we were all sort of locked in a room working on stuff. That was definitely different. I feel like writing is another thing like touring or doing interviews on the phone that becomes more natural the more you do it. When I’m home, that’s pretty much what I focus on all the time and I’m so grateful that I can wake up in the morning and do that. It’s just becoming easier and easier.

bB: You’ve experienced some pretty wild and rapid success since you first started, which definitely isn’t something you see every day. What would you attribute that success to?

JP: I get asked a lot about how we sort of stumbled into the limelight and for us, it was just playing shows out of our hometown and taking a leap of faith. I was enrolled in a state college in Florida  and I went on tour with these guys after I met Thomas, who played guitar in our band for close to 5 years, and we pretty much decided we weren’t really gonna look back. We booked shows all up and down the East coast in a van loaded up with stuff and making no money and people thankfully started to take notice. Getting in a van and getting out of your hometown is the best thing for a young band who knows that that’s absolutely what they want to do.

bB: You’ve played with some pretty insanely big acts (Pixies being one of them) on some huge festivals that most bands dream of playing. Who is still on your list to tour with or play with?

JP: Oh god, I’m totally open to ideas. Doing the Pixies tour was obviously a huge life affirming moment for us. If they were looking for support again, we’d be happy to do it. Never got a chance to meet Jay Mascis, I’ve seen Dinosaur Jr. like seven times and I would love love love to play shows with them some day.

bB: That would be awesome!

JP: And if Fugazi every reunites, I’m going to that show one way or another.

bB: So I want to switch gears a little bit to talk about Thom and his longstanding battle with sarcoma. This kind of situation is overwhelming for anyone in general, but especially for you guys who have been touring and writing together non-stop for the past 5 years. How has the band been dealing with it all?

JP: He’s getting really strong through all of it, so I feel like we have to, too. He’s really just a very determined individual and a real fighter. This is no easy thing for anyone and I know the decision for him to get off the road, which is obviously the right decision in hindsight, was very difficult for him to make. It’s gonna be a long struggle for him unfortunately so we’ll have to take it one day at a time.

bB: How crazy has it been to see so many bands and artists you guys admire come together and offer so much support?

JP: It’s really amazing. If I ever had doubts in people in general, this whole thing with Thomas has changed that. There are so many people who have been so generous.

bB: It’s definitely even overwhelming  for me, or I’m sure any fan, to see all of the support from other fans and bands that we all probably listen to, which is awesome.

JP: With this compilation we did recently, seeing Guided By Voices and Yo La Tengo on that for me is baffling because those are two of my favorite bands and definitely two of Thom’s favorite bands. So while I picture that he’s exhausted and scared and all that, I know that he’s at least grateful and happy to see so many people giving so much support.

bB: What have been your favorite dates to play so far and what are your most anticipated dates?

JP: We played at the Rough Trade store in Brooklyn, and I hadn’t been there before. It sounds amazing in there on stage, and they have probably one of the nicest record stores I’ve ever stepped foot in so it was really cool to see that. Dates I’m looking forward to would be Montreal — we happen to have a ton of friends there. There’s a band called No Joy from Montreal and a guy named Alex Calder who we’ve toured with both extensively in the past and are coming to the show tomorrow. Part of touring is seeing different pals who you don’t get to see all the time so I think that night’s gonna be a blast.

bB: What kind of reception do you guys get in Florida or your hometown?

JP: There’s definitely some pride in Florida. It’s not every day that a band comes out of South Florida that sounds like us so I feel like Florida shows are special for that reason. People come to the shows and you can just tell that they’re happy that they can be proud of a band from their part of the world.