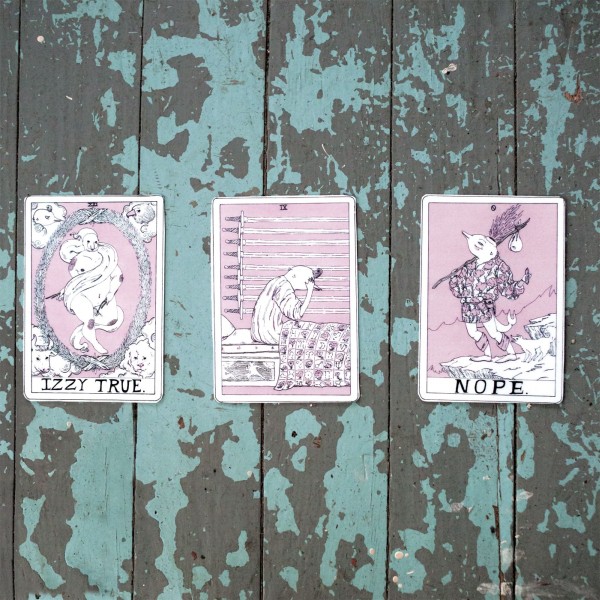 Ithaca, NY based indie-punk quartet, Izzy True blends an intoxicating cocktail of catchy, sweet melodies and emotive lyrics to form their debut full length record, Nope. Released in August on New Jersey punk label, Don Giovanni Records, Izzy True don’t strain themselves with trying to be different for the sake of being different. Instead, the four piece use their separate identities to create a sound they can feel good about calling their own.

Headed by frontwoman and guitarist, Isabel Reidy,, her brother and lead guitarist,Silas Reidy, bassist, Jon Samuels, and drummer, Angela Devivo. Lead singer, Isabel started making music originally under the name, Fight A Scary Dog, a bluegrassy, indie-folk project. The four members of the band came together first as close friends and played in the Ithaca Underground, an arts and music community in the Ithaca area. Here the band met with co-founder of Don Giovanni Records, Joe Steinhardt.

Izzy True plays with a nuanced collection of sounds that mix and mash elements found in 80s post punk, with strong, thick bass rhythms that are blended together with guitar moments that seem almost breathless. Sounding similar to what you may get out of a Smiths record, like on the opening to the track “Deep Dark,” a smooth sounding and emotive song. Melodic vocal harmonies and song writing throughout the record will also make you think of the Pixies on occasion. Izzy True do not become shackled to these stylistic genre choices. Everything is grounded and their sound doesn’t end up getting away from them as a result of trying to do too much. This is helped along by the delicate crooning of vocalist, Isabel Reidy, who can produce raw and powerful tones and at other times evoke a stark fragility that makes her voice sound as if it’s going to fall apart at any moment. She also has a pleasant folk inspired tone, not to be confused with a countrified twang.

Nope opens with “Mr. Romance,” a fun track and the single from the record. It showcases the band’s strength with using catchy vocal melodies with everything backed by a tight rhythm section. “Which Wish” begins with an interplay between a nice little bass line and a faint guitar that almost kind of dances around it. This leads into one of the stronger songs on the record. The group likes to mix up their sound in the middle of a song and halfway through “Which Wish,” the guitar switches into a guttural, fuzzed out tone and back again.

This is another of the band’s strengths. Each song is imprinted with the same DNA, but you’re never left asking, “Did I hear this already?” and running for a total of 37 minutes things never feel bogged down. As a complete piece it’s a fun record, and that’s fine. Fun doesn’t have to be intrinsically tied to lacking substance and or being bland. Nope is fun and does those things and does them well.