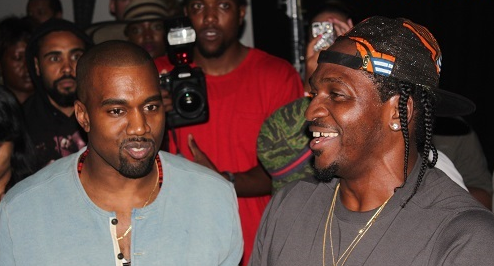 Pusha T (through Funkmaster Flex) released  “Lunch Money” about a week ago (week ago), his first new track since his solo debut album My Name is My Name last year. From back in the Clipse days of the early to mid 2000s, right through MNIMN, King Push has been rapping over unorthodox beats. Take 2002’s “Intro” off of Clipse’s Lord Willin or 2013’s “Suicide” as examples. It’s in Pusha’s blood to choose unconventional production. So, earlier in the week when “Lunch Money” dropped attached to P’s name, it wasn’t exactly shocking that the beat was pretty whacky.

Listeners debated over whether the beat was good or not, but the real conversation started when the producer of the track was revealed to be none other than Yeezus himself. On the record, I would call this a weird beat for Kanye to produce. Off the record, I’d say that this beat is weird as fuck for Kanye to produce. Although Kanye has always been at the forefront of what is big, and what will be big, I would never say that his beats have sounded so intentionally futuristic. Composed mostly of unidentifiable sounds, Kanye really goes crazy with his samples. The foundation of the beat sounds like a cross between a bong rip and one of those rigid wood blocks that you played with in an elementary school music class.  Combined with some otherworldly swirls and crashes, and some slot machine sounding-blips, this beat is insane.

Kanye has always been an innovator, someone who knows what will be big and is one of the first artists to head in that direction, but this beat appears to be weirder than any of his past endeavors. Is it the weirdest? Here’s some of Ye’s furthest departures from his signature sounds.

The title track off of Common’s 2005 album is a beautiful music composition that sees the beat evolve from a wonderfully performed bass line to one that flourishes with a traditional synth, violins, and other components that make for a great song. It’s undeniably beautiful, but almost independent from a hip-hop beat entirely. This isn’t something we’d ever really identify Kanye with.

The lead single off of 808s & Heartbreak, “Love Lockdown” was Kanye’s first venture into something synth-poppy. Influenced by artists like Phil Collins and Gary Numan, the track sparked Kanye’s entrance into minimalism. Each sound is meticulously placed to evoke emotion. Much of the emotion in Kanye’s previous beats came from the soul samples, but “Love Lockdown” started Ye’s obsession with the power of the 808 machine.

His first experimental beat with Pusha came as the lead single off of MNIMN, more than a year before the album actually drop. Here Kanye’s production is uncharacteristically clunky, setting an intentionally awkward pace for Pusha to flow over and for Future to do Future things over. Until the last couple of years, Kanye’s production had differed, but always remained smooth. Here was a distinct departure from that, as “Pain’s” rockiness made the track so great. It’s a methodical pump-up song that uses a doesn’t need speed to provide energy.

Kanye has gone through many a phase when it’s come down to his production, and I’ve really only highlighted the tip of the iceberg. But if I were to dive deeper, nothing approaches the absurdity of “Lunch Money.” The heaviness of much of 2013’s Yeezus was Kanye’s vision, but a team of producers assembled the beats. Will “Lunch Money” serve as a new era of Kanye sound? Will Kanye consider beats like this for his forthcoming album? I have my doubts, but something this abstract from Kanye really is something we haven’t seen before, it’d be strange if it was a one-off deal. Listen to “Lunch Money” below, and try to make something out of it yourself.