Is “FourFiveSeconds” Even A Song? 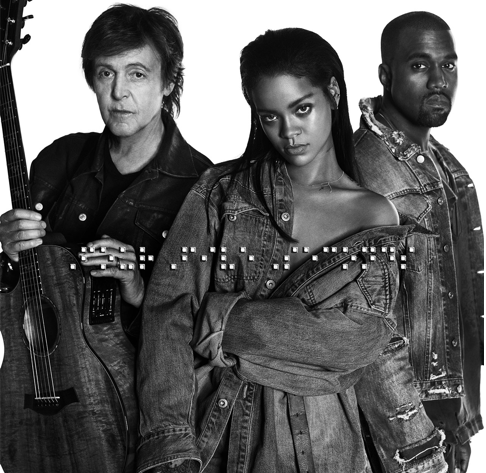 On paper, the Kanye West-Paul McCartney-Rihanna collaboration “FourFiveSeconds” looks huge, a swing-for-the-fences song that could actually change things. It features two of the world’s greatest pop stars, plus a Beatle, and other wild card talent, but virtually none of their presence is felt. The legendary Paul McCartney is reduced to tapping on a few keyboards—maybe guitar. Kanye deploys a brief, auto-tuneless vocal performance that is totally mailed in, and I have no idea what David Longstreth of the Dirty Projectors is doing here. For all we know, he was just hanging out in the same room while the song was recorded and got some props. A total of 10 people are credited here – a spare acoustic guitar song – that sounds like it was mixed down from just four tracks.

The song’s uplifting, face-the-day tone feels like it could be sung at AA meetings or in one of those weird, born-again Christian mega churches where sermons are given via power point presentations. It seems to go directly against the pussy-and-vanity ethos of Yeezus, and that’s fine, except the song is not good. Rihanna’s vocals are strong, but I burst out laughing during Kanye’s verse. It sounds like a Mr. Big song, something Kanye has enough confidence to do precisely because he is Kanye West.

Kanye, in Springsteen terms, analogized Yeezus as his Nebraska and his forthcoming album as his Born in the USA. As it stands right now with the two songs we’ve heard so far, it sounds like Kanye is approaching Springsteen’s aimless early 90’s Human Touch/Lucky town period instead of the bombastic, genre-defining output he is known for. Like my friend said, is this even a song?

Listen to “FourFiveSeconds” here or here until someone throws it up on Youtube.