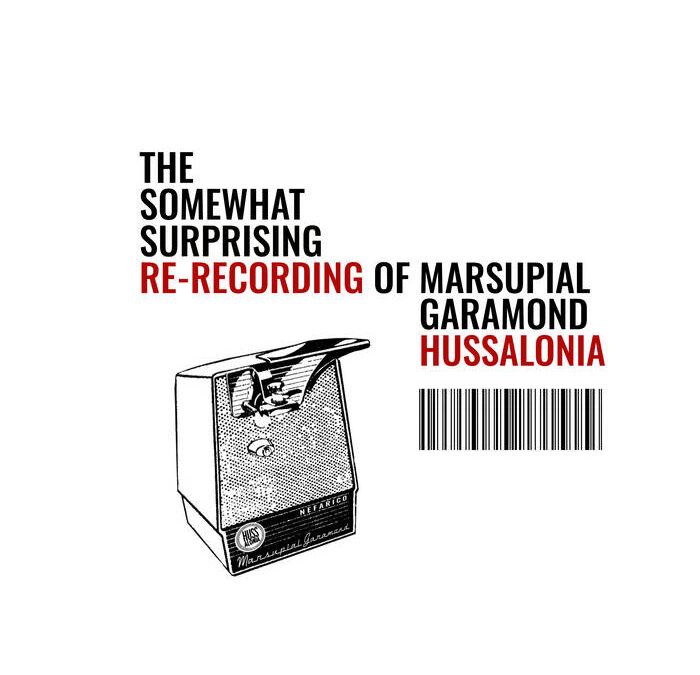 Legend says in the year of 1997, a pop music cult was born via the Nefarico soap company and named Hussalonia. A quarter century later, Hussalonia has given us The Somewhat Surprising Re-Recording of Marsupial Garamond Hussalonia… A project that was dropped about sixteen years ago re-recorded, mixed, and mastered to the complete satisfaction of not only Nefarico & Hussalonia; but their fanbase as well.

For those unfamiliar with Hussalonia, the riveting backstory and completely immersive worldbuilding are a part of the charm. In addition to their uniquely-told origins coming from a dystopian (or, surprisingly and unsettlingly current) world, their music is incredibly pristine and well-written. A truly all-around experience from this one-of-a-kind Buffalo-based artist.

The album starts with the riveting “Time and Place,” in which Hussalonia bellows for the one he once loved. Conceptually continuing the tale throughout the entirety of the rest of The Somewhat Surprising Re-Recording of Marsupial Garamond Hussalonia, the album has its own pocket in time and space; separate from its predecessor, which makes it even more impressive when finding out that all of the instruments and vocals were recorded alone. The album is full of lovely instrumentals of all shapes and intensities and soaked in melody – take the squiggly keyboard tones over the jangly guitar in “If You Had To Tell Someone” vs. the sludgier, fuzzier guitars in “If You Were Another Girl.”

The eleven track LP is so sequentially different that you’re practically on the edge of your seat waiting for what’s about to happen next. Musically, Hussalonia treks through uncharted territory like a prairie field; challenging the modern day sound with a signature 60’s appeal. My personal favorites would be track six, “Marsupial’s Theme,” and seven, “You Must Be A Cartoon.” Due to the mania of the drums clashing with the calm guitar and keyboard on “Marsupial’s Theme,” it really helps you embrace the ambiance within the setting of the LP. The following track, “You Must Be a Cartoon,” features some of the most creative songwriting there is to offer. As soon as you hear the opening lines of “You must be a cartoon, The way you crawl from under pianos and fallen anvils” you’ll be in the desert with the Roadrunner and Wile E Coyote.