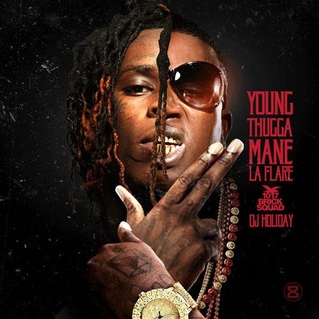 With the release of Young Thugga Mane La Flare, two of the biggest trap stars in the game in Young Thug and Gucci Mane take on a project full of banging club tracks. Young Thug is the up and coming Atlanta artist that has been making waves with hit club singles like “Danny Glover” and “Stoner,” who has received the co-sign from the Trap God himself. Gucci, renowned for his consistency on his free projects, comes through with another solid effort on this tape, exchanging verses and choruses with Thugga throughout.

Young Thug’s distinctly unique flow his on display throughout the project, as expected. On the mixtape’s second track “Bricks,” his squeaky sing-songy autotune effort on the chorus contributes to one of the more memorable and catchy songs on the whole tape. He is the shining star on this thing, as his charisma and true originality are impossible to ignore. Simply put, Thug does not sound like anyone else in industry right now. His sound isn’t refined by any means, but Thug rotates between low-key impressive verses and catchy choruses on nearly every track. He comes through with that amazing quality of kind of sounding like trash at a glance. But, if you make the effort to listen to Thugga’s lyrics and appreciate the dexterity of his flow, it’s relatively easy to realize that this dude has talent and a significant future in the rap game.

Although “Stoner 2 Times” doesn’t come close to living up to it’s namesake in the hit single “Stoner,” it provides a particularly noteworthy Young Thug verse. His verse is chalk full of enjoyable rap, with hilariously ridiculous lines like “I know she put me somewhere in her will, she want my pickle, you know we make deals (dills).” The highlight of the tape might be the incredibly teenage titled song “OMG.” which features Young Thug whining and wheezing over a DJ Mustard-sounding 4 note trap beat. It really is incredibly infectious.

As far as Gucci goes, his contribution to the tape is nice, but really complimentary in relation to Young Thug.  He comes through with the usual drug, trap references but he’s done it better in the past. Despite his ridiculous image, Gucci has shown in that past that he’s a relatively savvy player in the music industry, with high profile collaborations with artists like Mariah Carey under his belt. He even seems aware and willing to contribute to the fact that this the year of Young Thug. His flow throughout the project is consistent ,but nothing we’ve never heard before, and it’s easy to listen to Gucci’s verse on most tracks and eagerly await the Thug to start his section.

Considering Young Thug is signed to Gucci’s 1017 Brick Squad Label, it kind of makes sense that Gucci lets Thug star on the tape. A more spirited Gucci effort would help the overall tape, but as is Young Thugga Mane La Flare works as a great coming out party for one of the most exciting and unique new artists in hip hop, with Young Thug.