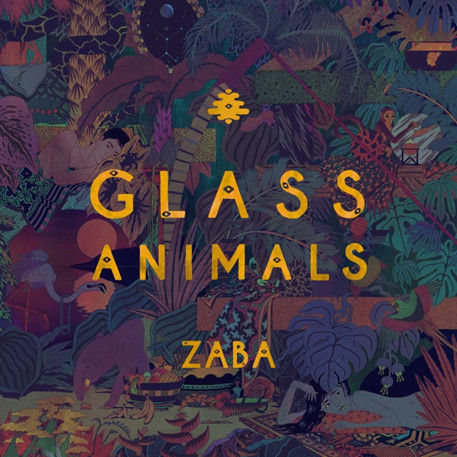 It was just this past April that the promising Oxford-based quartet Glass Animals cemented themselves a tight little niche in the psychedelic indie-pop market with their beaming EP Gooey. Now they’ve returned with their debut album, Zaba, to prove that beyond the Radiohead reminiscent grooves or the minimalist pop production, they are in fact an inimitable, contemporary pop creation. It’s only fitting that they hit the mark right out of the gate even with a ton of pressure riding on this up-and-coming group’s premiere effort.

Glass Animals’ sonically forecasting Gooey EP brought about one of the quartet’s most unrestrained singles in “Gooey,” again found on Zaba. Oozing basslines all on top of Dave Bayley’s smooth, sleek falsettos make it one of their most authentic feeling cuts to date. The track isn’t without its fair share of sexual innuendos as unorthodox uses of pet names get that across, especially when referencing Winnie the Pooh while singing “Ride my little pooh bear, wanna take a chance. Wanna sip this smooth air, kick it in the sand. You just wanna know those peanut butter vibes.”

If the precision and detail of Dave Bayley’s vocal talents seem like somewhat of a godsend, its because his original life plan was to become a doctor, so there’s no shock that in the song “Black Mambo,“ his voice dominates with pitch perfect accuracy. As the group’s most R&B influenced track, “Black Mambo” couples a scattered electronic synth, a ruthless set of punchy drumbeats, and the trance inducing vocal work Bayley.

Throughout Glass Animals’ synthesis of genre-crossing stylistic elements, “Hazey” was admirably foraged with the sounds of Eastern string instruments and rhythmic percussion beats. The song transcends itself above simple album fillers by combining a unique set of instrumentation and Bayley’s haunting vocals that hypnotizingly recites, ”Your baby’s falling, you know I’m taking now. You know I’m dancing, you know I’m racing round. You know you’re so juiced, you said you kicked the pools.” Equally surprising in the most pleasant way possible is “Pools,” an experimental fusion of the group’s signature indie-pop sound with a slight tropical twist. This song procures a sort of laid-back mood that’ll fit right into any summer playlist on that chill, relaxing sunny day.

“Toes” also makes a splash with its irrefutable swagger coming from its mellowed down tempo and stripped away approach that results in an atmospheric song unlike anything else on Zaba. Almost two years since its initial release, “Cocoa Hooves” returns with the same guitar-centric, simplistic sound it had a couple years ago and its absolutely deserving of a second try. It’s one of those songs that hooks listeners in from the very beginning and then brings us on a sort of self-reflecting, mental journey that continues to provoke us even after the song ends.

Not only was Zaba created throughout an endless cycle of trial and error, but it was also the first group off of Paul Epworth’s (hitmaker for Adele, Florence and the Machines and Friendly Fires) new record label, Wolf Tone. A debut effort as strong as Glass Animals solidifies them the success they clearly desire while also making them certifiable indie-pop stars on the forefront of an oddly captivating new sound.