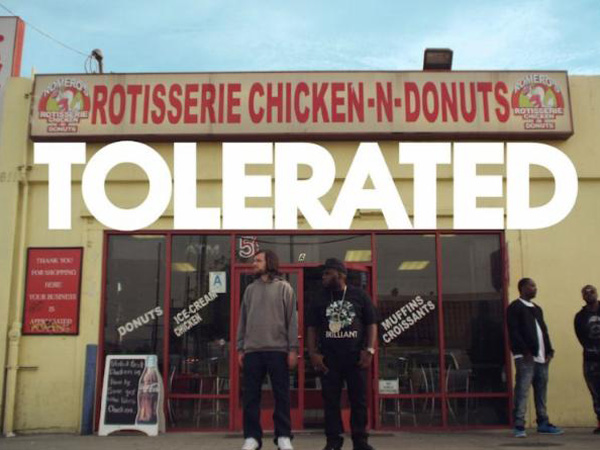 Ok, so technically the song and video came out on Monday, but I finally stopped shaking with excitement over it to have steady enough fingers to type about it today. Mind you, it’s not the best thing I’ve heard this week, but it is my most anticipated. The first teaser from the Broken Ankles EP that drops next week, this track will hold you over until April 8th when the full-length video and album are released.

Full disclosure: I’m borderline obsessed with Girl Talk. Haters gon hate, but I think his baggy sweats/no shirt/dope hat and/or headband steez at shows is superfly. The Pittsburgh native has been churning out mixtapes for years, sampling everyone from Jay-Z to Bruce Springsteen on well-produced and well-acclaimed albums that are the lazy man’s dj at parties. Too lazy to make a playlist? No worries, because Gregg Gillis has you covered.

Freeway, *not* to be confused with “Freeway” Rick Ross, though both copped their name from the same famed drug trafficker, hits hard on this track, and his chain game is, shall we say, brilliant. The Roc-a-Fella affiliated rapper, who caught my ear guesting on slept-on Kanye track “Two Words” from Ye’s debut album, College Dropout, is known for his gritty delivery over even grittier beats, and while this style doesn’t necessarily mesh with GT’s seamlessly sampled sound, on this track it works.

Multiple mixtape maker Waka Flocka brings his usual flair to the track, and while he isn’t featured heavily, his combo of thick braids and thicker video hoes makes up for his short verse.

The video itself, directed by Allen Cordell, is a teaser for the full-length vid, and is a kung fu/fight club hybrid that features GT and Freeway ripping limbs off the people unlucky enough to cross their paths while swagging their way through the city.

Cordell, who also directed videos for Cloud Nothings (who are coming to Buffalo this Friday y’all!) captured the self-proclaimed “anti-hater” message that GT and Freeway are trying to convey in the most over-the-top and almost campy way possible…if you had told me that classic low-budget horror flick turned Spider-Man franchise ruiner Sam Raimi decided to direct a bloody funny music video, I would have believed you.