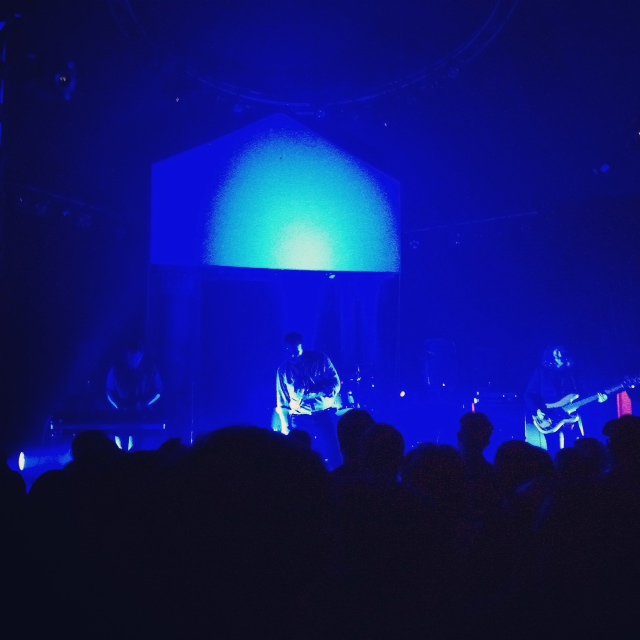 This past weekend a couple of minor (okay, very minor) Buffalo imports hit up the Steel City as part of the Quad City Blogger Tour while one of Pittsburgh’s best-bred acts, the splice king Girl Talk, invaded Canalside. Hitching a ride with Buffalo Eats, a couple of us buffaBLOGGERS took full advantage of the wonderful accommodations that our host city, and more specifically the staff at Visit Pittsburgh, supplied.

Between exploring some Pittsburgh attractions (the museum of megalomaniacal Andy Warhol may have been our favorite), and a lot of good eating and drinking (did I mention we traveled with Buffalo Eats?), we somehow managed to make a musical weekend out of it. Friday night in Millvale, about a ten minute drive across one of Pitt’s many bridges, we hit up Mr. Smalls for a sold-out performance from Baltimore’s Future Islands.

It’s a super-quick ride over the river from downtown Pittsburgh to the venue Mr. Smalls Funhouse, so it’s not a huge deal to either drive or take a cab. Mr. Smalls is a gutted eighteenth-century church that is now a 650 capacity theater. It’s visually stunning to walk into, and even more impressive when you realize that the space holds two bars, enormous acoustic sound technology and lighting systems, as well as artist housing and recording studios.

Mr. Smalls represents a true postmodern repurposed space in this way. The venue prides itself on being the perfect size for a show that’s both intimate and epic, and it’s proven itself to be the perfect place for a couple of our (respective) favorite acts ever: within the last few years, they have hosted the likes of Jenny Lewis, Broken Social Scene, Stars, Baroness, and Metric, among others. So swoon-worthy.

Artists that come through to Mr. Smalls can stay in the Rock Hostel or the School House, both appointed with cool, modern decoration. The recording studio has had clients as diverse as Ryan Adams, Anti-Flag, the Black Eyed Peas, and Rasputina. These spaces have helped out both national touring acts and local groups with their art and work, whether through having ample space to get ready and decompress before a performance or having a creative place to get started on a record. This place loves their local scene as well—they’re even hosting a “rock star reality camp” called Real Life Music Camp to get teens a steady foothold in the industry.

Pittsburgh seems magical and extremely supportive of music, and we absolutely needed you to know about this awesome venue. At the end of the month, dreamy Washed Out will be performing with special guests Small Black at Mr. Smalls. We are also impressed with their D.I.Y. music space, the Mr. Roboto Project, an all-ages cooperative venue that will soon be hosting sweet acts like Sundials and Alex G, both of whom you absolutely check out. For a few other bigger acts, look to the Altar Bar, which will soon have groups such as Wavves, The Orwells, and Real Estate onstage.

As for the show itself, we managed to only catch the last song from Dan Boekner’s latest project, Operators (a late dinner can take the blame for that one). Between his work in Divine Fits, Handsome Furs, and Wolf Parade, Operators seemed to tend more toward the nervy and dark electro-rock of HF, so hopefully we can catch them again in the future.

Just after 9:30, the four-piece Future Islands took the stage. A star is born in frontman Samuel Herring, who seemed appreciative of the sold-out crowd and noted that the last time they played the venue there was just a small, lively audience of about 100. Herring was forthcoming with the audience that much of the material from their latest breakthrough album, Singles, was written about Herring’s crumbled relationship with a Pittsburgh girl. Those in attendance enjoyed the hometown connection, and, thankfully, judging by his reaction onstage, Herring had clearly moved on.

Much of the performance took from Singles, from the reach-for-the-sky track “Doves,” to the wistful “Dreams of You and Me,” to their striking single “Seasons (Waiting on You).” Herring’s now-famous rubber legs (and quite nearly twerking moves) were in full force that evening, probably causing a few members of the audience, both men and women, to faint. Has Sam Herring become one of the more unlikely sex symbols in indie rock? From the sounds of the crowd, it certainly seems like he has. Think of it something like this.

Other standouts of the evening were “Tin Man,” one of In Evening Air’s strongest tracks, the hypnotic “Beach Foam,” and the closer of both the show and the album Wave Like Home, the drifting “Little Dreamer.” Both professional and engaging, as well as genuinely fun, Sam Herring and the rest of Future Islands treated the sold-out Mr. Smalls with respect and humor as homage to the repurposed Pittsburgh holy place that it is.