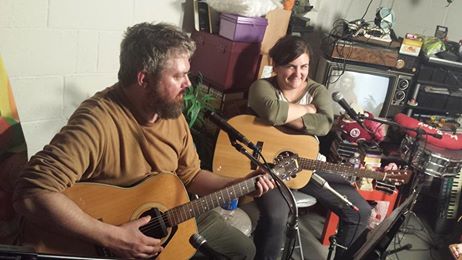 The words Bill & Jamie’s House may give you thoughts of stuffy, pompous dinners and cocktail parties, events where you find yourself surrounded by professors and PhD students who manage to speak a lot of words without saying anything. Needless to say, Bill & Jamie’s House never sounds like too much fun, but oh contrary my pessimistic butterfly, the band has more meaning and substance than your graduate school mind can fathom.

The new acoustic duo has yet to play a proper show or release any recorded material, and yet they still seem to be creating a buzz for themselves already. What would you expect from Mohawk Place legend Bill Nehill and former Mallwalkers and Sexist member, Jamie Rowitsch?

“Although we are very new, it has already exceeded my expectations tenfold,” Nehill says. “Also, I love the fact that we rehearse at Jamie’s kitchen table.”

If you have followed the projects of Nehill in the past (Poison Arrows, TMMC), it seems an acoustic duo would be right up his darkened alley, but according to him, he was attempting to shy away from another stripped down project.

“I was initially against it as I was really trying to get away from acoustic music,” he states, “however, I went for it and fell in love with it immediately. It was not planned to come together the way it did.”

This time around, it’s different for Nehill.

“The acoustic ‘folk’ songs I write for Bill & Jamie’s House are much different than what I was writing seven years ago,” he explains. “They have less narrative, less structure, and are more primal and, although some may not see it, they have more hope.”

Rowitsch chimes in, “In Bill and Jamie’s House, it feels very old fashioned. We sit down, have coffee/tea or whatever, talk about life, and make deliberate decisions about collaborating musically. It feels nice to put time into something I’m so compassionate about.”

On the horizon for Bill & Jamie’s House is their first “official” show on October 17th in the back room of Rust Belt Books on Allen Street. The band is also gearing up to record some of those songs, which were born and hashed out around Rowitsch’s table. Though the band is in its beginning stages, Nehill promises that the songs are “more than enough for an album.”