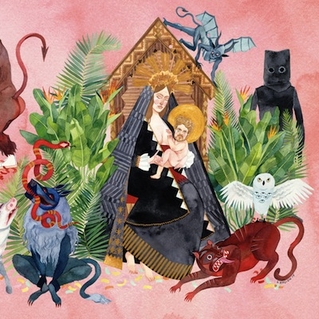 The song is called “Bored in the U.S.A.” and Tillman first performed it on Letterman – perhaps not un-coincidentally, the night before Election Day – so that it flooded Facebook feeds and music journalism sites like this one on the very morning that many Americans might have been thinking about the state of their country and their place (or lack of place) within it.

It was probably a calculated move on Tillman’s part but that does leave the question of what exactly he might have been trying to say by way of that calculation. For that, it might be helpful to take a look at the song that was almost certainly the satirical inspiration for this one: Springsteen’s “Born in the U.S.A.” (Though I will grant that the Clash’s “I’m So Bored with the U.S.A.” may have provided partial naming influence.)

Bruce Springsteen was born in 1949 and, as such, falls pretty squarely into the demographic that’s now ubiquitously referred to as the boomer generation. He grew up in the 50’s, came of age in the 60’s, and rose to stardom in the 70’s. By 1984, however, when he released Born in the U.S.A., the album, he was 35 and had clearly become relatively disenchanted (see: 1982’s dark, despairing Nebraska as proof).

Whatever slim hope there might have been that the various “revolutions” of the late 60’s would lead to widespread, permanent, positive changes in the cultural fabric of America, were more or less dashed by the early 80’s: Reagan was president, conservative politics reigned supreme, and the country was seemingly pining for some imagined lost innocence from the 1950’s.

“Born in the U.S.A.,” the song, was one way that Springsteen responded to that frustration. It was a scathing, snarling lament about the disappointment and isolation experienced by the working class, especially those who had served in Vietnam, which was comically mistaken for a patriotic hymn at the time (and often continues to be even today). It was an opportunity for Springsteen to re-write the script about what it meant to be an American living in America at that time, (even if it was mostly only a script to be read by working class men, who probably lived in New Jersey and probably looked a lot like he did).

Despite that, the style and sentiments of the song (disappointment, resentment, anger seething beneath the surface, a sense of betrayal) could probably apply across the board to anyone in the boomer generation who had reached their 30’s and suddenly realized the world wasn’t really looking the way they imagined it would.

Josh Tillman was born in 1981 and, as such, would probably end up grouped into the very front end of the “millennial” set as most definitions usually place the starting year for that designation at around 1980. As part of the millennial vanguard, he grew up in the 80’s, came of age in the 90’s, and probably continued coming of age (much to the chagrin of traditionalist finger-wavers everywhere) in the 00’s. In 2014, he’s now 33 and straddling the line between looking forward at the stragglers from Generation-X, scooping up the last remnants of the American Dream, and looking back at the legions of millennials born in the 80’s and 90’s, in all of their despondent, aimless glory.

Every generation has its expectations and disappointments, and there’s a probably a tendency for generational self-centeredness and over-amplification in that respect (“these things happening to us today are the best things”/”these things happening to us today are the worst things”) so the most interesting part about “Bored in the U.S.A” as a loose parody of “Born” (and I say loose, because really the object of scorn here is the “bored” narrator rather than Springsteen’s song) might be how the specific circumstances have changed for the typical disenchanted 30-something in the last 30 years.

First, rather than a jubilant, fist-pumping anthem that could easily be confused as having a positive message, there is likely to be no such problem with Father John Misty’s latest. “Bored in the U.S.A.” is (appropriately) a slow-burning ballad that sometimes burns so slowly you wonder whether Tillman is going to be able to muster up the energy to finish it. He sounds bored, a pastiche of the privileged white male with too much time on his hands whose father’s anger and resentment have given way to his ennui and resignation.

The song starts with Tillman asking: “How many people rise and say, my brain is so awfully glad to be here for yet another mindless day?”

It’s a rhetorical question but it sets up the conflict that plays out over the rest of the song. How do we, (and let’s say “we” is the modern-day version of Springsteen’s working class white male), balance having the nerve to be personally unsatisfied with the fact that, honestly, we should just be thankful to be alive and living in one of the most prosperous countries in the history of human existence, which just so happens to be inherently set up for us to succeed?

It’s a question that speaks to the prevailing shift that’s occurred in the last 30 years as to what we generally expect out of our country: from expecting it to treat us all fairly and create an environment where we can all make money and raise a safe, happy family, to being largely indifferent to it so long as it creates an environment where we can each achieve our own personal hopes and dreams, no matter how outlandish, unrealistic, or useless to society they might be.

Or as Tillman wryly asks: “Is this the part where I get all I ever wanted?”

The American expectation has always been the “pursuit of happiness,” but what that happiness might entail has become less traditional and increasingly subjective. In many ways, this is a good thing, but it also invites plenty of opportunities for self-centeredness and for a special inward-focused variety of disappointment when our expectations aren’t met. Springsteen’s was a collective disappointment, based on universal expectations about what it “should mean” to be “born” in the U.S.A.  Tillman’s is mock personal disappointment, based on  subjective expectations, after consistently being told “you can be anything you want to be if you put your mind to it.”

That difference is what could lead one generation of young, white, males to feel angry and cheated and another to feel resigned and blasé.

That’s made evident when the song finishes with a “bored in the USA” refrain where Tillman interjects with various examples of American boredom that have become synonymous with the “plight” of the millennial generation: a “useless education,” “a sub-prime loan,” “prescription pills” – and it makes sense because the over-educated, over-indebted, and over-medicated are poised to be more absorbed in their disappointments and are probably more susceptible to becoming despondent about the same.

The punchline of the song, however, comes after a certain point when each of these interjections is met with what seems to be canned laughter and applause (during his live performance on Letterman, it seemed like this might have been an oddly over-enthusiastic audience, but these same staged reactions are on the album’s recording as well). This makes more sense in retrospect as nothing he says is particularly laugh-out-loud funny (except for maybe his pained exhalation of “save me White Jesus!”) and it also serves to add another layer of sad-sack, self-awareness to a song already dripping with it (“and of course, here is where the audience should be laughing and clapping because they totally ‘get this’ and I am really entertaining them!”)

It’s a bitingly smart and sarcastic move that removes any lingering questions as to the fact that privileged millennial males, Tillman included, are the butt of the joke. It’s his version of Springsteen tricking Reagan’s re-election campaign into playing “Born in the U.S.A” as if it were a pro-government slogan instead of a caustic takedown of everything he stood for. (Now Tillman only needs a 27-year old white guy blogger to un-ironically write an article about how it’s “so true” that we’re all just bored in the USA.)

One of the most revealing lines here though (other than perhaps, the faux-incredulous “how did it happen?!”) might end up being the tossed-off: “But I can kind of deal.” If you’re looking for a hint as to the song’s Election Day coincidence, it might be here. If you have the luxury to be lucky enough to be “bored” in the first place, it’s probably because nothing so bad is happening to you that you can’t “kind of deal” with it.

So what reasons do we have to be “bored” and apathetic with ourselves and our country and our positions in it, instead of gracious and humble and motivated, just because our subjective expectations aren’t being met?

Probably not very good ones.