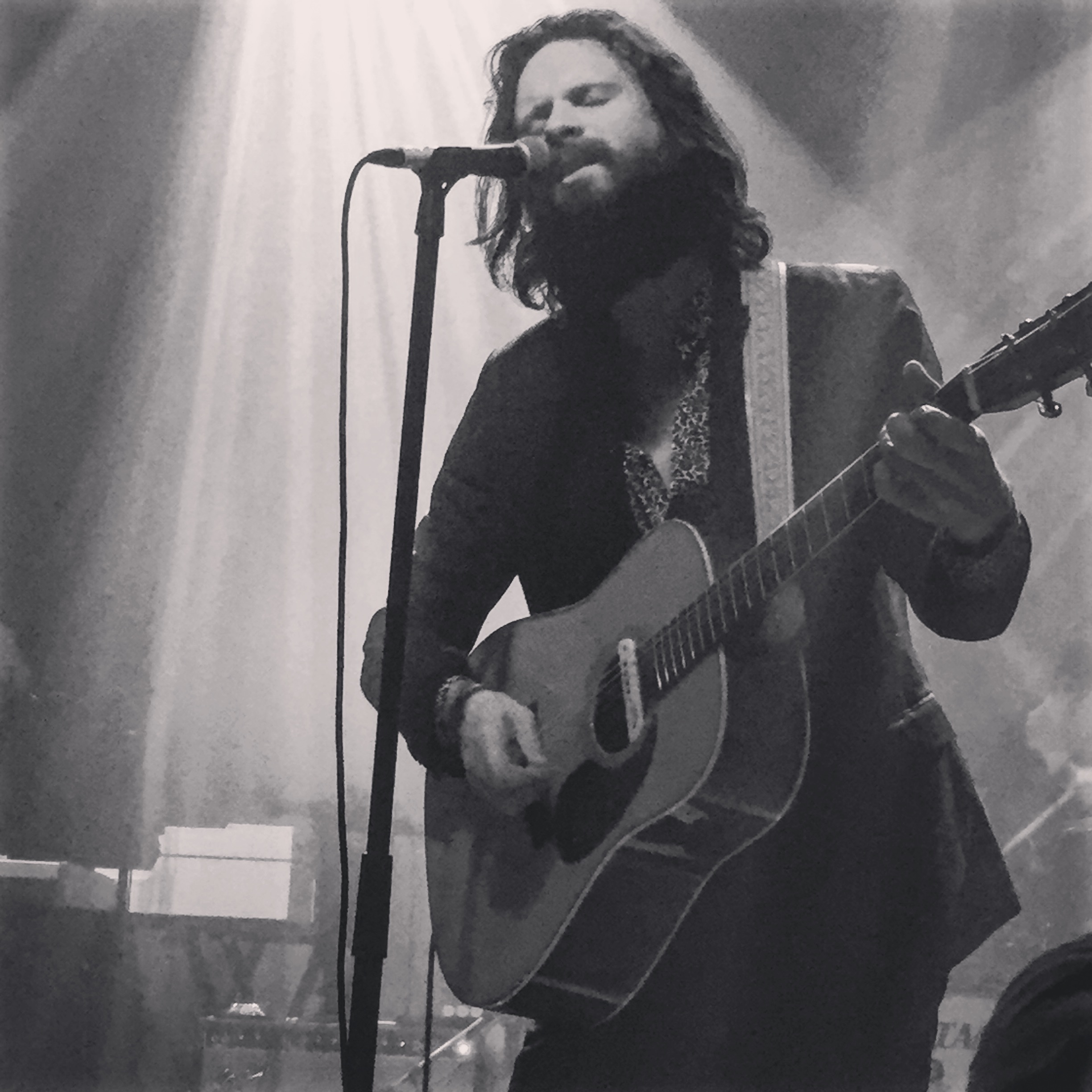 Triumphantly returning to the Town Ballroom stage three years after a now legendary opening performance for Youth Lagoon, Father John Misty delivered a scorching, hot as molten lava headlining set that melted the minds and libidos of the assembled sold out crowd. The show, part of an international tour supporting his 2015 masterpiece I Love You, Honeybear and sandwiched between Lollapalooza and shows in NYC, was an unexpected late addition to an already fine summer of shows, and now stands as one of the finest of the year, and a near religious experience.

The opening set from the enigmatic Springtime Carnivore was ideal, and got everything started right with a satisfying mix of Cardigans-esque 60’s pop and Southern moxy. Playing a selection of tunes from her eponymous debut, Springtime Carnivore (aka Greta Morgan) wowed the attentive crowd with expressive, breathless vocals and hazy, jangly guitar riffs that conjured bittersweet sensations of summer and summer music festivals. This was perfect and just right because in an ideal Buffalo, FJM would’ve been here for a late summer festival appearance (and not the Entercom Inc. sponsored rubbish that went down at Canalside a few weeks ago). Maybe in the future…

After a brief interval, the Town Ballroom fog machine and a heart shaped neon sign that said “No Photography” fired up, and after his backing band that looked like him at various stages of his life took their places, Father John Misty (aka Josh Tillman) sauntered onstage and ripped into “I Love You, Honeybear,” unleashing what shall be known as “the Father John Misty Effect” on the amped up audience. Thrusting, emoting, and sanging (like Luther Vandross, he didn’t sing it, he sang it) every syllable as if his life depended it, #NationalOrgasmDay came a few days late judging by the gasps, sharp intakes of breath, and peals of delight from female audience members that rang out throughout the ballroom hall. Drinking it all in nonchalantly, Tillman played it cool, and plunged into the next song, a pleasant and laid back “Strange Encounter” that gave everybody a chance to collect themselves.

The respite was brief because the sensuous new jack R&B grooves of “True Affection” immediately sent the crowd to pieces along with Tilman’s vigorous James Brown/Mick Jagger/Jarvis Cocker moves. Again the crowd was given a chance to calm down with the mellow AM Gold Glenn Campbell goodness of “Only Son Of A Ladies Man” before the Brown/Jagger/Cocker moves were deployed again to terrific effect on a smoldering “When You’re Silent And Astride Me.” When one works the whole “Sex God” thing before large groups of people you can tell that Father John Misty has clearly learned to pace himself.

But he didn’t pace himself too much because the show flew by at a breakneck pace, the torrent of jams and eros washing over the increasingly overpowered audience that went with it. Singing along to the intentionally problematic “The Night Josh Tillman Came To Our Apt?” The audience was down. When a trumpet player ambled onstage to provide a rousing solo for a galloping and resplendent rendition of “Chateau Lobby No. 4?” The crowd  again lost it. We even supplied fake laughter for a stripped down and theatrical “Bored In The USA.” Shows are always better when the crowd is truly into them, and the knowledgeable crowd truly did its part.

By the time the main set joyfully careened into a home stretch that included “Hollywood Forever Cemetery Sings,” “Funtimes In Babylon,” and “Holy Shit,” the American apocalypse that’s the backdrop for I Love You, Honeybear seemed to be going off onstage thanks to Mr. Tillman, his crack band of bearded mystery men, his lighting guy, and the trusty Town Ballroom fog machine. After a brief interlude and impromptu Q&A featuring such probing inquiries as “favorite place to write” and “favorite sandwich” (answers: in his bathrobe, despair), the master of ceremonies  brought the church service to a close with the achingly sweet “I Went To The Store One Day” and the elegiac Fear Fun epitaph “Everyman Needs A Companion,” breaking the spell and letting us drift back down to earth filled with holy, and potentially sinful, fire.

Yes, this was religious stuff: ecstasy for some, a spiritual revelation for others, worship for all… and when Tillman sang “SAVE ME WHITE JESUS!” during “Bored In The USA,” most of those assembled were almost certainly thinking of Father John Misty, and the whole Glenn Campbell/Jarvis Cocker/Charles Manson thing he’s got going on. That’s a cult just waiting to happen, and you know what? Sign me up for that rapture. The in-flight entertainment is fantastic.

Setlist
“I Love You, Honeybear”
“Strange Encounter”
“True Affection”
“Only Son Of A Ladies Man”
“When You’re Smiling And Astride Me”
“The Night Josh Tillman Came To Our Apt.”
“I’m Writing A Novel”
“Chateau Lobby 4 (in C for Two Virgins)”
“Nancy From Now On”
“Bored In The USA”
“Nothing Good Ever Happens At The Goddamn Thirsty Crow”
“This Is Sally Hatchet”
“Hollywood Forever Cemetery Sings”
“Funtimes In Babylon”
“Holy Shit”