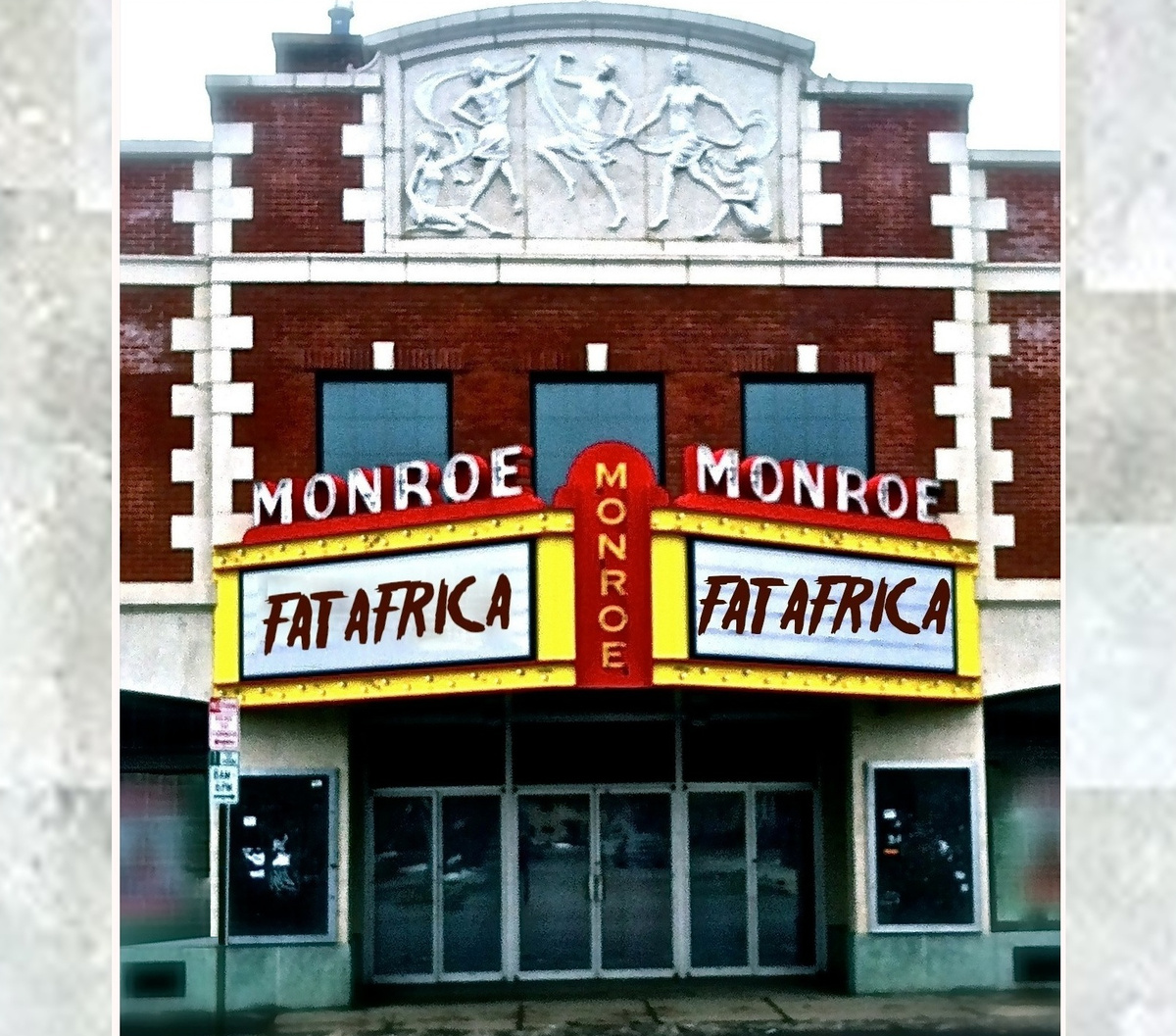 Fat Africa’s Monroe is a weekend album for malcontents. Get stoned, bitter and fired Friday afternoon; hopeful in the evening just to be left alone; hopeless, hungover and depressed by Saturday morning, just to laugh at yourself in the afternoon and stare cavalierly into the night as soon as the sun sets, with no place, in particular, to go.

At least, that’s how I chose to read it. Noah Masters, the mind behind Fat Africa, would probably tell me I am wrong, and he is probably right. My impulse is to stretch the album over a weekend, but in real life, it took three years to put Monroe together. The first track recorded, the heartbreaker “Inch,” was put to tape in 2011, and the rest were jammed out on a loop pedal from the bottom up over the next few years. In the mean time, Masters moved around quite a bit (as he says on his Bandcamp, “Born in Toronto, Raised in Rochester, Educated in Montreal, Living in Brooklyn”) and earned a degree from McGill. He contacted Rochester’s Dadstache Records in 2013 because he dug the logo, and now they’re putting out his tape.

It’s all a bit meandering, a bit serendipitous. So is Monroe. Most of the album is refreshingly minimal, and there are moments that feel endearingly off-kilter, barely held together. But that’s just a feeling: Masters is always pegged to an emotional undercurrent and an understated rhythm. He’s in total control, and he seems to know exactly what he’s doing.

Like I said, in my sensitive little heart, the album opens on Friday evening with “Double Gold.” Minimal guitars twang and bend over a bed of reversed tones: you can feel the Modest Mouse influence throughout. “I just lost my job, fuck that shit, fuck that place, they don’t know me as well as you do,” Masters half-sings, half-speaks. It’s melodic but intimate, almost sounding like you’re eavesdropping on a phone call to his girlfriend. If this were actually a Modest Mouse song, Isaac Brock would eventually explode into rage, but Masters broods instead and we brood along with him in a pocket of rhythmic bitterness as he asks “Where is my double gold?”

Later on this fateful Friday evening, we’re feeling slightly more hopeful with the instrumental “April’s Fool.” Out of seven tracks total, two are instrumental interludes, and both serve as emotional breathers. Masters’s vocals are delivered in a nearly-indecipherable coo at points, which makes them easy to connect to and project on. Generally unable to understand what he’s saying, but getting the vibe, Masters gives you the feeling of someone who desperately wants you to know how he feels but is afraid to really tell you what he means. That shyness feels kind of heartbreaking at points, so with an instrumental like “April’s Fool,” it’s nice to be able to feel a little hopefully and recharge your emotional batteries. Doesn’t hurt that it’s a sincere-sounding, Cure-Unplugged-esque guitar ballad, either.

Of course, as is generally the case in this strange and terrible life we lead, it’s all downhill from here. “Inch,” maybe the best track on the release, is also the most affecting. It’s the moment in the evening when it sinks in that you really are going to be left alone, and so there’s no need for subtlety when Masters sings “Took my heart and broke it in your hands… where the fuck were you when I was lying on the floor, almost dead, and I couldn’t move an inch?” On paper, it sounds like an accusation, but delivered in Masters’s shy falsetto, it sounds like his inner monologue, looping through his head as he’s lying in his bed, too depressed to move a muscle.

Things get better, but only after they get worse. “Futility, Or…” is the soundtrack to Saturday morning’s hungover depression after Friday’s bitter binge. The realization that the thing that left you bitter on Friday is all you want on Saturday is a rough one, especially when you realize that reaching out is futile and doing nothing is worse. Masters’s murky guitars and echoed vocals sound sometimes like he is performing from the bottom of a hole, an appropriate sonic complement to his lyrics. It’s catchy, but it still sounds like cognitive dissonance.

The instrumental “A Momentary Lapse in Though or Passion” is where things start to pick up. Masters picks out some arpeggios over some samples of Louis CK telling us that “every year’s been better than the last.” It’s lazy and relaxed: it feels like you’re zoning out in front of the television in the afternoon, finally getting your head above water.

Similarly, “Friends with Benefits” trots along, trading in the turmoil and sense of urgency of the first few tracks for resignation and calm. The drums and guitar take turns dropping out, looping over each other as if nothing feels any real need to assert itself. Masters is at his best musically when he’s angry and depressed, but it’s nice to not feel so torn apart.

The album ends on an upbeat note with an outlier, “Minerva Amsterdam.” If we’re still following the weekend conceit, this the song to which you apply your Saturday evening cologne. It’s the most-produced, least-minimal track on the album with the most driving rhythm. It’s still understated, but you could dance to it. With some pitch-shifted vocals and catchy guitar lines, it sounds like a lost track off of Mac Demarco’s Rock and Roll Night Club. It sends you off with a relatively hopeful vibe, lines like “We don’t need God” notwithstanding: the night is unknown and may hold nothing for you, but you at least feel ready to face it.

On that note, it’s hard to say what the future holds for Fat Africa and Noah Masters. Masters expressed interest in finding a drummer, and perhaps a female vocalist, or maybe putting out the next good Pixies album to make up for their recent, underwhelming Indie Cindy. He lives in Brooklyn and is putting out albums through Rochester. It’s hard to say what will come next. But I’d be interested in hearing just about anything the guy puts out.

Check out his Bandcamp here, or listen to “Inch” below. If you’re interested in picking up a tape, head on over to Dadstache Records and give them five of your dollars.