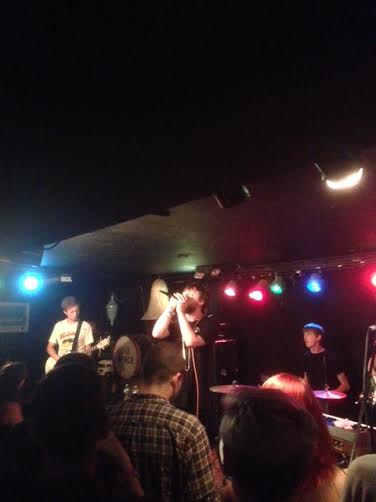 Minutes into his set Saturday night in Hamden, Connecticut, Mathew Cothran, mic chord snaked around his hands and neck, asked the crowd at the Space if they were into prophecy. He then launched into a bunch of authoritative lines that seemed like he was performing an exorcism.

Cothran’s project, Elvis Depressedly, mixed introspective lyrics with a more high powered edge than the way the songs appear on his album, this year’s New Alhambra, which is in part an homage to the arena that used to host ECW wrestling. The songs are fairly downcast, reminiscent of early Bright Eyes, mixing refined production linked together with obscure samples of muddled dialogue.

On stage, Cothran prowls around while the four members of his band bring his songs to life. Barely any of his songs hit three minutes, but he went the distance for each one, holding the mic with a vice grip and singing so hard that all you saw were the whites of his eyes as they rolled up into the back of his head. “Ease” turned a whisper into a growl.

He opened with “Inside You,” and closed with “Weird Honey,” two of the best songs on his 2013 release Holo Pleasures. On “Weird Honey,” he sings, “If there’s a cool spot in Hell, I hope you get it.” Down in the basement of the space, it seemed like we were already there.

Earlier in the night, Brooklyn’s Mitski sang a bunch of punk songs that were either sad or pissed off. At one point in the night, she pointed her finger out into the crowd and sang “fuck you.” Her set ended with an explosive guitar drone as she wailed into the body of her guitar.