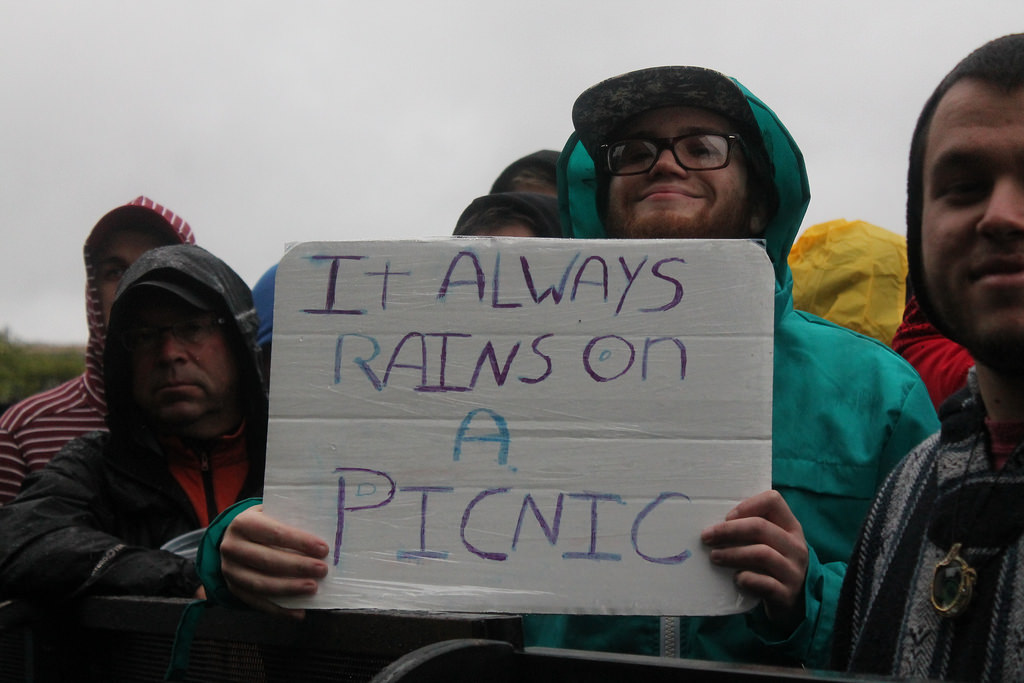 In 2011, I went to the notoriously rainy UK festival, Glastonbury. In what was one of the festivals worst years yet, rain poured for five days straight creating flash floods and leaving 12 foot piles of boots littering the fields. It was deemed “The Year of Mud.” Never did I think I would experience anything like it again, but as I stare at the mud caked jeans in my laundry hamper, I think Edgefest 2015 might come close.

That being said, if there’s one thing that both festivals have proven, it’s that as bad as weather gets, it’s nothing that a few beers and some good bands can’t solve. Opening the proceedings were the rising hometown heroes of Made Violent. After continuing to grow over the past year, the band even caught the attention of UK indie rocks Wolf Alice, who asked the trio to open their UK tour. It’s hard not to be excited everytime the band play town, as each performance feels like it’s right on the precipice of the band’s big break. Their UK style ladrock sound completely won over the now drenched crowd which was much needed at this point to pick the mood up.

Next was 90s Canadian alt-rockers, Our Lady Peace. I can’t pretend to be too excited about this act as it’s decidedly not my taste but OLP did put an admirable amount of effort into winning over the crowd and sounded like a tight well-oiled machine. Plus, growing up in Buffalo, it’s hard not to know all the words to mega hits like “Superman’s Dead.” So kudos to them for making the show fun.

At this point I would’ve loved to stay and catch all of Coheed and Cambria, but the elements were slowly making it unbearable, so me and my friend decided to refill our drinks and get momentary cover. Luckily we did return in time to hear classics like “A Favor House Atlantic” and epics built for mega rock fest like “Welcome Home.” The band absolutely blistered through the end of its set to a massive ovation from the crowd.

The easy highlight of the night was Modest Mouse, who probably should have been the headliner judging by the massive crowd assembled. Issac Brock as always greeted the crowd with his weird observations and sarcastic one-liners making him hard not to love. The band tore through hit after hit from “Float On” to “Dashboard” and sounded terrific. That being said, if there was one disappointment, it’d be MM’s complete disregard for older tunes. While I realize the band adjusts set lists for festivals, it was hard to find a single song on the setlist that wasn’t written after 2004. However, the band is always reliable whatever it may performing, and the soaked crowd completely ate it up.

While I’d love to have coverage of the actual headliner, Rise Against, here, I’d be lying if I didn’t admit the elements finally won out. As temps dipped into the 40s and the rain continue pummeling us, my friend and me decided to trek back to the car. While it may not have happened at the world’s largest music festival, Buffalo’s own “Year of Mud” proved to be another amazing event in it’s own right, leaving behind a night full of spilled beer, soaked Chucks, and a ton of great memories