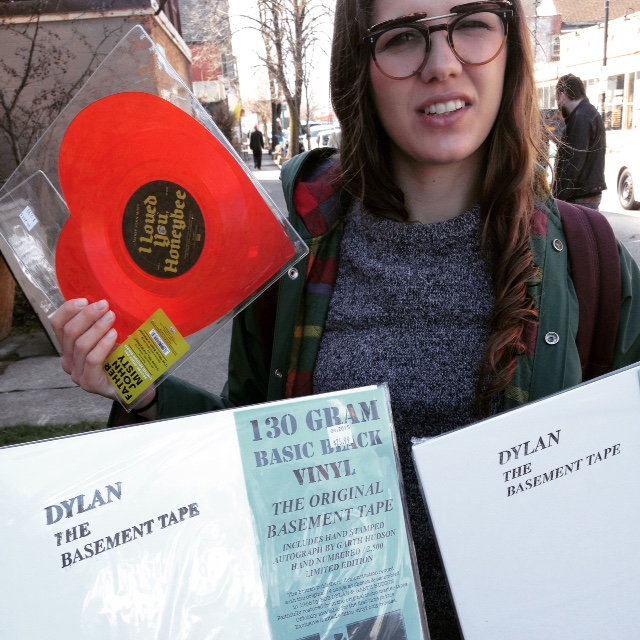 Another Record Store Day came and went this past Saturday, and it turned out to be a great overall experience for many of us on staff here at the blog. The weather was fantastic, dozens of local bands were playing free shows all over Buffalo’s record shops, and we even bought some decent vinyl. Check out what a few of our writers had to say about Record Store Day 2015.

Cliff Parks
My football (soccer) team Arsenal was in the FA Cup semifinal, forcing me to bail on the prodigious line at the original Record Theatre at Main and Lafayette, which wasn’t specifically the end of the world because there weren’t too many RSD special releases this year that I considered “MUST HAVE.” Next year, hopefully I won’t such a conflict again, otherwise I’ll have to get in line at 5am like the brave souls at the head of the queue like they probably had to do back in the day when picking up new Led Zeppelin or Pink Floyd releases.

Anyways, my team won, and after the match (and several libations), I got back to a still busy Record Theatre where I used a birthday gift certificate and a stamp card to pick up a few goodies, including the underrated new Toro Y Moi album What For?,  the delightful Live In Williamsburg from Shuggie Otis, and I even practiced what I preached and tried something new: Here Come The Girls, the latest from NYC rock duo London Souls (produced by Soulive’s Eric Krasno) and a vinyl copy of the wonderful self-titled debut LP from local duo A House Safe For Tigers. No regrets whatsoever this year, but next year I’m camping out.

Mac McGuire
As I mentioned last week, I have never purchased an exclusive Record Store Day release (gimmick records kind of suck), but for the last few years, I have still found myself waiting in line for hours with vinyl collectors frothing at the mouth, only to end up leaving the shop with an album I could have just bought the day before. Last year, I waited an hour to buy Radiohead’s In Rainbows, an album that has been available for purchase for over seven years. Oh well.

This year, though, my friend Julie and I had a mission, and that mission was to acquire a copy of Father John Misty’s “I Loved You, Honeybee” 7″ single. My reasoning was more for novelty sake as the god damn record is actually shaped like a heart. As for Julie, let’s just say she is really into Father John. After a hot tip that Black Dots might have a couple copies for sale, we arrived to a line of about 20 people deep and waited for about 15 mins for the doors to open. Once it was our turn to enter, we were able to complete said mission, although only able to grab one copy. Since Saturday also happened to be her birthday, I gladly let her take the record. She did graciously offered to let me  borrow it on Mondays, Thursdays, and every other Sunday though.

We also both grabbed a reissued, mono copy of Bob Dylan’s The Basement Tapes with The Band. It was signed (stamped) by Garth Hudson, so that’s pretty cool I guess.

Mike Torsell
Sooooo, I know I ranted about Record Store Day in my attempt to stir the pot, but I went and bought records anyway because I am not that much of a wet blanket. We went to two record stores on Saturday afternoon. This was well after the initial rush so all those special releases were long gone, but I was able to pick up the live Stooges record for my girlfriend.

For myself, I tracked down a probably unofficial release of the Joy Division’s Peel Session recordings. For those unaware, Joy Division was an incredible live band so any recordings of them in concert are going to be solid purchases.This particular recording has my favorite version of “Transmission,” so I was happy. Finally, I picked up Pulp’s Different Class which continues to age very well. All in all, the weather was great and with the Small Press Fair, it was a pretty solid Saturday.

One complaint: live music in the middle of Record Theatre is not ideal for looking through the shelves. Ok, I am that much of a wet blanket.

Brendan O’Connor
While I did spend most of my day working at Black Dots, I was able to pick a few things up.  First off, my brother was able to scoop a copy of the RSD edition soundtrack to The Darjeeling Limited, which is one of my favorite movies of all time and features some really amazing compositions. That was the only RSD exclusive I really picked up.

From Black Dots, I did find a copy of the hard to find Deafheaven self titled 7″.  It’s amazing that I still find stuff there every time that I head in, even though I work at the shop pretty often.  Also, I picked up a copy of the Del Paxton / Gulfer split out on Topshelf Records after Del Paxton’s incredible outdoor set on Black Dots’ second floor deck, and I couldn’t be more stoked about it. Lastly, one of my favorite labels, Run for Cover, put out an incredibly limited edition of Cloakroom’s Further Out for Record Store Day, which I am in the process of tracking down now. While I did not pick up as much as I normally do, this was easily the most fun RSD that I have participated in.

Nick Muldoon
While Record Store Day wasn’t the absolute total success it could have been (if only I got out early enough to get that Run the Jewels’ single!), it was still an incredibly fun experience this year. Like I said in my feature from last week, record shops to me are more about the relationships you form with the store and those around you. So let’s forget the limited exclusives and talk about the holiday Record Store Day has become.

As me and my girlfriend hopped around the city from various local record stores we caught some great shows from local bands (Sleepy Hahas, Wolf, Newish Star) and were greeted with familiar faces everywhere we went. Whether it was running into an old friend outside a Lloyd’s taco truck or meeting up and scanning the shelves in the hopes of helping each other find a particular 7″, it was a great experience. I feel like while I’ve done Record Store Day before, this year offered a glimpse as the social event it can be.