I tossed around several ideas for this week’s column, and though it felt predictable, I kept circling back to writing about Mad Men. Maybe it was the fact that this Sunday marked the last new episode for A. Whole. Year. Maybe it’s the fact that I’ve been re-watching the entire series and curating a list of the show’s greatest music moments…for a later post. Yes, later. So if you immediately thought “best of” list when you saw Mad Men in this week’s title, I am sorry to disappoint.

But don’t fret. I am writing about Mad Men because when you write a series about the use of music in filmed media and the Mad Men gods include a Bert Cooper song-and-dance number at the end of an episode that airs three days before your next column is due, it only seems right.

Note: if you haven’t watched this week’s episode (and it’s Wednesday, so what’s your excuse?), then read on at your own risk, since it could spoil a significant plot point.

Let’s get down to it. Bert Cooper died this week, and his send off was surprising, to say the least. He sang “The Best Things in Life Are Free,” shoeless and flanked by beautiful dancers. The performance foreshadowed the variety show entertainment America was beginning to see (and would have an overabundance of about five years later), delivered on a glitzy, corny platter by the likes of The Lawrence Welk Show, The Sonny & Cher Show, and Las Vegas in general. 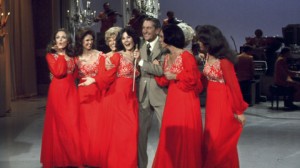 The song itself was written and first performed in 1927 and was later covered by several artists in the 1940s and 50s. It’s the kind of song that would’ve really resonated with Don, a man whose entire dysfunctional modus operandi was forged out of a Depression-era whorehouse and later modeled after the slick, polished gender expectations of his mid-adulthood. You can almost see him at 15, listening to this song play on the radio from the top of the brothel’s stairs. Twenty-five years later, you can see him in a New York City lounge, listening to Bing Crosby croon for the lost golden days.

Don has always been a divided man. As such, the song works for one time period in which he exists, and the choreography works for the other, but does the sequence work for the Mad Men narrative as a whole? Bert’s three-minute musical farewell was part of Don’s hallucination (?), but despite the audience being well aware of the fantasy, it’s so far out of Mad Men’s normal sphere that you have to stop and talk about what it means.

When I started thinking about the answer to that question, I arrived at something I hoped I would never say about Mad Men: I don’t know if it really meant anything. I understand that the song’s lyrics reference the moon, fitting for the episode’s date. I understand that Bert Cooper, the beguiling octogenarian, needed an interesting send off. I also understand that Don was hearing a message (from somewhere) about fate and the meaning of life.

But consider the facts: Bert Cooper has been a complete effing asshole to Don for two seasons now. A few episodes ago, he called a humbled Don before him to humiliate and scold him about going after new business. Bert’s behavior belied his claim that he was “loyal to his team.” Would Don ever, in the farthest reaches of his mind’s eye, see Bert as anything the variety show-esque number made him out to be? Maybe he would’ve in the first few seasons, but not now.

Moving on. If the Bert Cooper variety hour wasn’t supposed to reflect the way Don sees/could’ve have seen/saw Bert, even in a hallucinatory state, then is the sequence for the audience? My inclination is to say no, because Bert was not just a turncoat to Don, but also a disappointing racist by the end of the last season, and what’s more, an extremely supporting character, to the point where no one really thought about him anymore.

That leaves one final option for why the writer’s may have included this surprising scene: it was a send off to the actor, Robert Morse. Morse is a Tony Award-winning Broadway veteran whose repertoire not only includes, but was built upon successful musical theater (and later, movie musical) roles.

Mad Men gave Morse a moment and a chance to relive the song-and-dance thrills of his youth. That’s really nice, and it’s a lovely gesture, but is the Mad Men audience interested in the actors getting their due? I wish Bert Cooper had a final scene that made sense for his actual character, rather than something cool the Mad Men writers did for one of their own. I don’t think the tap dance being shoeless made up for the obvious non sequitur.

You may argue that Bert’s goodbye fit into the show’s narrative because the choreography was a dead-on homage to the era’s showy live entertainment. I say it fit more into Morse’s career’s narrative, since that kind of entertainment is exactly what he cut his acting teeth on. But I’m not interested in Morse’s career! I just want to try Burger Chef, damn it.

Am I being a hater? Is it really that bad for Robert Morse to finally have his day in the sun? No. Hating aside, I guess what this sequence made me realize is that we have very, very, very little time left with Mad Men. I don’t want it wasted on gimmicks or experimental tactics. I just want the last few hours to make sense. I also want Don to find peace and I really don’t want Julio to move. But if we can’t have everything, can’t we have just one of the above?