What do the following phrases have in common?

“Just sit right back and you’ll hear a tale, a tale of a faithful trip…”

“Here’s the story, of a lovely lady…”

“Whatever happened to predictability, the milk man, the paper boy, evening TV…”

Two of the above theme songs are brought to you by the 1960s (Gilligan’s Island and The Brady Bunch, respectively), the decade that ushered in the scripted sitcom and singlehandedly built the television industry. American families gave up radios in favor of television, and by the late 1950s, weekly sitcoms were being broadcast into homes all over the country. A family in California watched and heard the same thing as a family in Maine, thanks to the power of some wires and heated glass tubes. 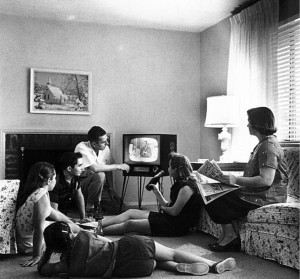 It didn’t take long for the young industry to take off. Producers, directors, and writers who had been lying in wait finally had their day in the sun. By the time the 60s rolled around, there were countless TV shows jockeying for America’s attention. Many have been lost to the annals of time, but the ones that stood out have a very obvious thread that unites them: memorable theme songs.

Many people view the classic theme song as a hallmark of 1960s TV. A typical theme song is jaunty, introduces the show’s basic narrative, and has the uncanny ability to become an earworm. Everything in the lyrics promises that the show will be wonderful and everyone will be okay and happy in the end, kind of like a musical incarnation of a smile.

Is this not the basic promise of 1960s America? The theme songs to which American viewing audiences were subjected were a weekly reminder that just as the show’s characters were fine (with some plot-moving snafus here and there), the audience was fine, too. 1960s television, with its carefully constructed ideals of normal American life, reflected the cultural identity that real-life Americans wanted to believe they had. 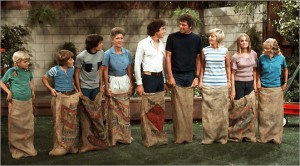 That was 50 years ago. America’s cultural identity has dramatically shifted in the last five decades, and television—and its theme songs—has evolved right along with it. Just as it did in the 60s, television programming throughout history reflects the image Americans of the time wanted to have of themselves. Today’s analytical, sarcastic, dark, and reflective shows have replaced the happy, family-centric sitcoms of the past. Even when the basic structure is the same as shows of the past (take Modern Family, for instance), it has to have a witty edge to survive in today’s Internet-cultivated snark market.

This 50-year evolution can be traced via the change in theme songs. Once you start considering them, you can see clearly who the audience was at the time and make inferences about what they wanted.

Take the third sample lyric from the beginning of this column. It’s from the 90s classic, Full House. A family-centric sitcom, the show’s theme song is very similar to what introduced 1960s sitcoms. It’s a full-fledged song, jaunty, decade appropriate, and sets your expectations for the show. The lyrics basically hit you over the head with what the show aims to explore. Milk men, paper boys, evening TV? It’s all about nostalgia, relying on 50s and 60s stereotypes (including television!) to draw in the audience.

And who was the audience? They weren’t just children of the 90s. They were parents, too, children of the 60s that grew up and became parents in the 90s, children who grew up accustomed to elaborate theme songs for shows about domestic matters. These parents tuned into Full House with their children because it reminded them of the family sitcoms of their childhood, even if it was disguised in 90s hair and set design.

The parent viewing audience had no problem allowing their kids to watch this show because it fit the values they wanted their families to have. It’s said that the way you raise a family is influenced by your own childhood. It’s hardly coincidental that Full House became so popular, given how its theme song aligned perfectly with the values screened to children of the 60s via the programs of their own childhoods.

Television theme songs have evolved since the 90s sitcom. Now we find ourselves in an age where television themes are pretty much lyric-less. No longer multiple minutes long or chock full of words, many theme songs are just theme music, notes strung together that invoke a mood but make no promises about the show that follows (see: Breaking Bad, Mad Men, Game of Thrones). The people who create the music are now known as composers instead of songwriters. The music has taken on the official identity of “main title sequence” rather than “theme song.”

These aren’t the only changes. The way the audience relates to main title sequences has changed, too. We’re a consumer culture with a short attention span. The 2014 viewing audience wants to get to the point. If the quick and wordless music wasn’t enough to convince you of that, consider how many notes of theme music have been lost to your DVR’s fast forward function.

It’s hard to predict what TV music will be like in the future. But children of the 90s are making babies who will soon be old enough to watch family-friendly television with their parents. What will their parents want for them? 90s kids are obsessed with nostalgia to begin with, and if history is the best fortuneteller, I predict many, many, title sequences about 90s-era values. Maybe this time it will be about Hi-C rather than milk (and the man who delivered it).