Column 28: Die Antwoord Teaches a Robot How to “Enter the Ninja” in Chappie

For anyone who’s seen Neill Blomkamp’s previous films, it’s no secret that he has a strong affection for his home country of South Africa. While other directors after achieving blockbuster success with a film like District 9 might see it as their ticket out of such an impoverished nation, Blomkamp has displayed a commitment to showing the world his home rarely seen on film. In his latest, Chappie, Blomkamp once again continues his embrace of South Africa, this time with the risky casting of unique South African rap duo, Die Antwoord, in lead roles. 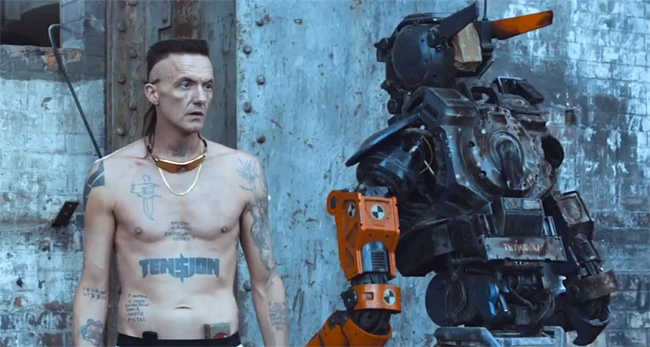 I say with some degree of surprise, the risk kind of pays off, the duo that makes up Die Antwoord both deliver fairly solid performances. Lead rapper Ninja gives a complex performance as a gangster who’s often as funny as he is brutishly violent and intimidating. While female vocalist Yolandi delivers a charmingly unique twist on the “thug with a heart of gold” role. The band’s unique look and style actually create a refreshingly different kind of hero. But while Blomkamp’s embrace of South African pop culture is admirable, it feels confusingly at times as if the film less embraces the culture of his home country than it does the specific culture of Die Antwoord.

This is one of the few areas where Chappie actually has some issues. The duo’s characters actually go by their rapper names, the band’s music soundtracks nearly all their scenes, and characters are constantly wearing their band’s merchandise. While the transition from music to acting is easier for some artists than others, the film’s insistence on pushing the Die Antwoord brand actually comes as a detriment to the duo’s commendable performances. A later scene in particular that should have been quite emotionally powerful actually loses some of it’s weight due to the distraction of Die Antwoord’s merchandise filling half the frame.

That said, while the film has a few distractions and tonal inconsistencies, Blomkamp’s gamble mostly pays off. While the film might have benefited from a little more restraint, it’s a wonder if that would have taken from it’s sheer originality. Chappie is a thrillingly unique sci-fi blockbuster and that’s thanks in large part to Blomkamp’s commitment to the culture of the place he calls home.