(Warning: This article contains some spoilers)

As I look through my Facebook feed, there’s two articles that seem to repeatedly pop up in my feed over the past month, the Vice article “This Sad Generation Doesn’t Know When the Party Stops” and articles about Iggy Azalea’s appropriation of black culture. And while one wouldn’t think the two could be related, the two keep bringing me back to perhaps the most divisive film in recent memory, Harmony Korine’s Spring Breakers.

To say that Harmony Korine’s film speaks the language of music is an understatement. Korine’s film not only understands the music it features, but also the culture that surround it. Music is intrinsic to the film’s very existence; and while there are moments of pop or rock music, there are two genres that provide the focal point for the film’s sonic soundscape: EDM and Trap Rap. 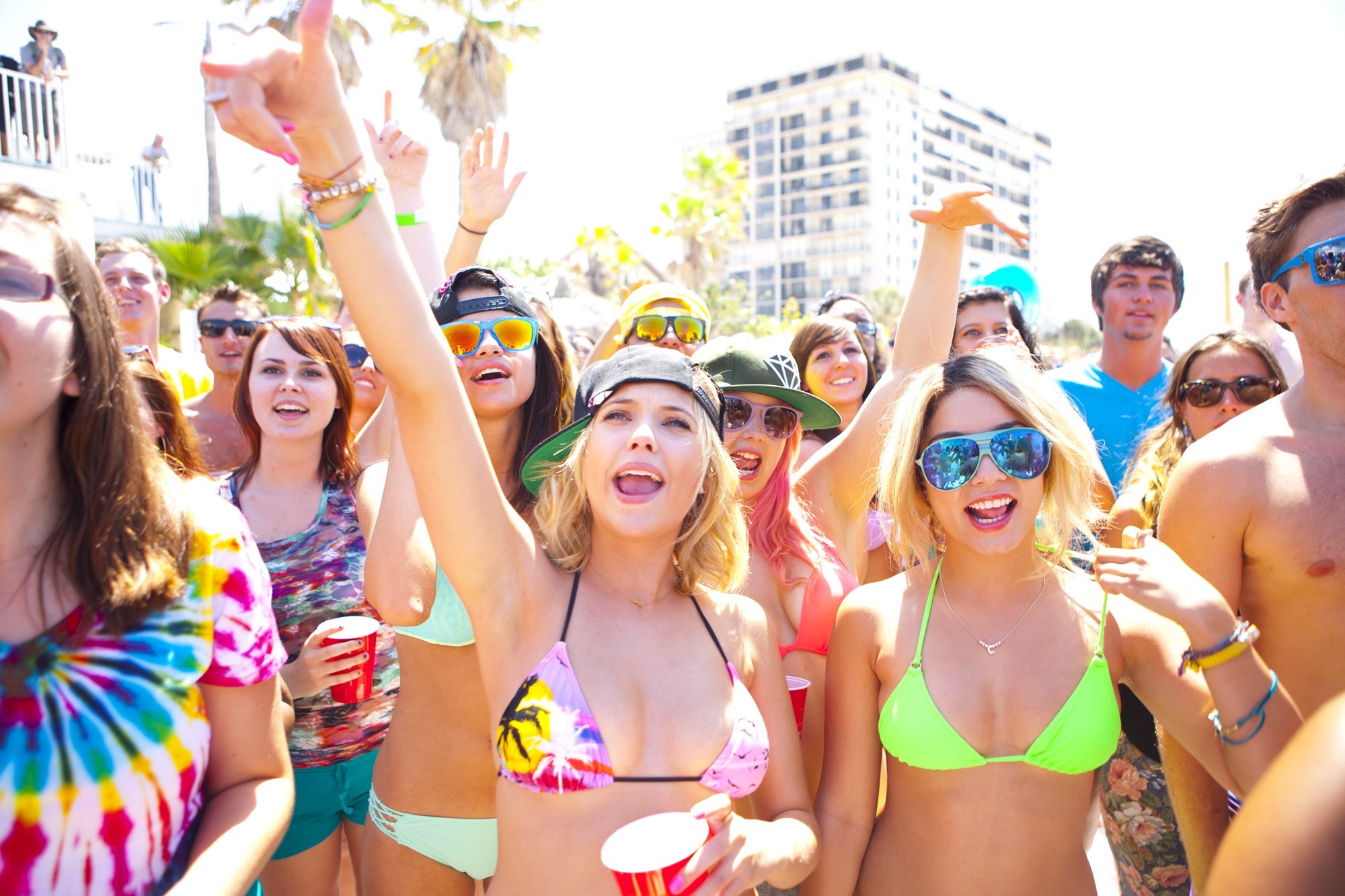 In recent years, EDM music has become the soundtrack to this generation’s party. The music’s loose, booming, sample-based repetitive nature provides the perfect complement for the highs of drug-fueled debauchery. So who better for Harmony Korine to explore this world with than Skrillex, the top superstar of the EDM world. Teaming with Skrillex, Korine ensures that every bit of his film’s score feels true to the party culture it seeks to explore.

The music not only provides the soundtrack for the film, but serves as the blueprint for the it’s structure. Scenes play out as a series of interlocking montages rather than as a linear narrative, montages repeat images and dialogue as if they were musical samples. The only thing that anchors these montages together to form a cohesive whole becomes the music, which provides the film’s structure. The film’s bright colors, quick cuts, and booming soundtrack all add up to create something of an unhinged fever dream that’s initially intoxicating.

This is the effect that Spring Breakers seeks to have on it’s audience, as it’s not here to chastise it for indulging in the escape that music, drugs, and partying can provide. Korine understands all too well that such escape can be exhilarating. But there’s something equally uncomfortable about the endless party of Spring Breakers as well. Early shots from the film are almost indistinguishable from those on MTV screens a decade ago, but Korine holds his gaze a little too long. His camera feels at times almost too close, less observational than voyeuristic, indulgence replayed to a point where it starts to become horrific.

Harmony Korine seeks to make a statement on a generation that without career prospects, has turned partying from an escape into a lifestyle. In the endless repetition of images of this lifestyle, Spring Breakers seeks to show it’s audience how empty and tedious it really is. Whether realizing it or not, by working with Korine, Skrillex wags a finger at a division of his audience who have used his music as their rallying cry.

The other genre of music that the film heavily profiles is Trap Rap. A sub-genre of hip-hop music that sonically isn’t that far from the world of EDM, but the culture that spawned it couldn’t be further away. Yet like EDM, the popularity of Trap Rap and Southern Hip-Hop as mainstream party music has grown in recent years. To the point where we’ve arrived to the Iggy Azaleas of the world, a white, Australian pop mega-star who raps in Southern Hip-Hop style ebonics to sell her music. The pop star refuses to acknowledge that any of her success over black female hip-hop artists could be in any way attributed to white privilege. Iggy Azalea has seen fit to embrace hip-hop culture while ignoring the African-American culture that built it.

In the opening scenes of Spring Breakers, we watch our young white protagonists in a lecture about the birth of the civil rights movement. As their professor speaks about what spawned the movement, the two girls appear bored and joke with each other to alleviate their boredom. Following this, we watch the girls speak to each other in hip-hop style ebonics while calling themselves “gangstas.” As the girls desperately look to fund their vacation, they decide to act as “real” gangsters and rob a diner. That the victims they’re shown to profit off of are predominantly African-American is not merely coincidental.

Later in the film, they’re given a gateway into the actual gangster world they’ve long imitated by a white trap-rapper named Alien (James Franco). That word, alien, being exactly what the world becomes to the girls. When approached with the realities and the blackness of the world that they’ve long intimidated, one of the girls is immediately terrified by it and returns home. As the film progresses, the girls who stay are seen engaging in the type of crimes described by the trap rap songs that soundtrack the film. What is clear, however, is that while the music of trap rap stresses a life of crime as a means of survival, our protagonists engage in it as a gleeful fantasy.

As the film delves deeper into our protagonists new life of crime, they begin a turf war with another gangster played by trap-rap superstar, Guuci Mane. While the two argue about turf and control, it starts to become apparent that Korine isn’t talking about the ghetto the two occupy, but the culture as a whole. Guuci Mane’s character utters lines like “Why don’t you go back to doing white boy shit like knocking over spring breakers, this is my world” and “He’s taking food out of my baby’s mouth, my baby’s gotta eat, my baby is hungry.” It become clear that Korine is talking about a society that has appropriated black culture to profit off of while ignoring the world and culture that created it.

In the film’s final act, the turf war finally reaches it’s end with a siege on the rival gangster’s house. The film plays out as a neon nightmare, our protagonists gangster fantasy reaches it’s violent end. A whole mansion full of black bodies are laid to waste as young bikini-clad girls gun them down in slow-motion. As Rock ‘n’ Roll was appropriated by white artists in the 50s, the black artists who built it’s tenants became footnotes; Harmony Korine fears the same for our current society. Our protagonists haven’t just co-opted the gangster world of their black counterparts, but destroyed it. The film’s use of race, music, and casting all intentional to make a grand statement on contemporary American culture.

By crafting a film around broader concepts and using a loose musically-inspired narrative structure, Spring Breakers crafts a film that can get at a plethora of underlying social ills in a deeply original and subversive way. A lot of films have engaged with music in recent years but rarely has one used the form to say something meaningful about it. It might have been two year since the release of Spring Breakers, but few films still feel so current.