AMC has an impressive track record of successful television programming. Its standouts, Mad Men and Breaking Bad, quite often are referred to as the best shows in the history of television. Anyone who’s watched them knows this to be true. But for every Jaguar pitch and jaw-dropping desert shootout, there are a handful of mediocre moments happening on one of AMC’s lesser shows. TURN, AMC’s new colonial spy drama, is just slightly better than mediocre despite an obvious attempt to be great.

TURN’s mediocrity is surprising because it has all the makings of a successful show: a story with a good hook, unknown actors, attractive costuming and set design, purposeful music, and the list goes on. It’s as if the programming team at AMC looked at their successes and from them created a checklist of what every other show must have in order to be good. This line of thinking seems foolproof, but results in making TURN feel formulaic.

Part of TURN’s formulaic feeling lies in its music. Its soundtrack is dominated by an increasingly popular tactic: folk/indie-esque music performed by very popular indie artists. These songs may be taken from the show’s time period and updated, like this week’s Laura Marling cover of “Bonny Portmore,” a traditional Irish ballad. Or the music may be created for the show, like the show’s theme song, “Hush”, performed by The National’s Matt Berninger and Civil Wars’ Joy Williams.

Music like this draws attention to the show in question because it comes at the audience from two perspectives. Its main purpose is to reward viewers by giving them something enjoyable to hear. It also aims to draw in fans of the musicians.

This strategy usually works well, especially when the music enhances what’s on the screen before you. It misses the mark in TURN, though, because the strategy doesn’t suit a show that is so dependent on its historical setting*. For a period piece to really work, the audience has to buy the show’s authenticity. Every aspect of a historical drama—its sets, costumes, setting, AND music—should invite the audience to believe in it. And it takes so much time to become invested in a show’s universe that to be brought out of it, each episode, by modern-sounding music is nothing short of jarring.

(*Let me note that TURN, so far, has only used modern takes on traditional songs. These songs have stood the test of time because of modern interpretations. They have an important historical relevancy, and it’s a necessary and wonderful thing…musically. A modern sound doesn’t work within this particular show’s historical setting.)

So where does this leave TURN? So far, the show has used modern covers in almost all of its episodes, and they’re all used at about the same time: the last five to ten minutes of the show. This is when the episodes’ major plot developments occur. The action starts cooking, the framework for the next episode is being set up, and then that week’s indie folk song starts playing. This tactic may work in a handful of episodes, but it’s heavy-handed to use it every week. It feels like the show is just assembling the episodes with interchangeable parts and hoping they succeed.

Though the use of the music is transparent, TURN’s soundtrack is actually very good when considered on its own. The pilot features a quality interpretation of “Turpin Hero” by Jake Bugg, indie-pop’s latest brooding singer/songwriter. “Turpin Hero” is an 18th-century ballad about Dick Turpin, an English folk hero whose romanticized thievery and gang activity has elevated him to legend status. Bugg’s version plays over a sequence where Abe Woodhull, the show’s protagonist, decides to sell his cabbages on the black market. The trader to whom he sells is a childhood friend who later gets Abe to become a spy for the Continental Army. Listening to “Turpin Hero” while Abe takes his first steps down the path of treason guide our expectations for who Abe hopefully will become. 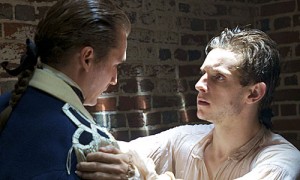 Bugg’s version of the classic ballad is nice, but is his take on it the best accompaniment to a scene of an 18th-century farmer deciding to sell cabbages illegally? His voice sounds too current for it to not stick out like a sore thumb.

Here’s the thing. Bugg and TURN’s music team could’ve created a version that fit the show’s historical context while still preserving Bugg’s original voice. But the focus seems to be on fulfilling the “cool music” criteria on the checklist, with no regard to whether it would fit the show’s universe. The music ends up feeling like a gimmick, as if “different” music makes something good.

The show’s third episode closes with a poetic take on the English sea ballad “Spanish Ladies.” Sarah Blasko, an Australian folk artist, gives the normally rollicking tune a haunting sense of poignancy. The version is wonderful, and would’ve really brought the episode home…had it not been for the cringe-worthy cinematography and acting in the scene the song accompanied. What occurred on the screen during this scene can only be described as “dat CGI.”

Blasko’s music is wasted on this scene. The tune is melancholy, but it plays over a joyous colonial rebel pulling off a sneaky theft of a rowboat. Rather than phonetically drive home what we were seeing, the clash between the happy (and disastrous) visuals and somewhat sad-sounding melody is little more than distracting. This song will be released on iTunes soon, and I hope it finds its own identity, separate of the show, because the song is very good.

TURN’s most successful music to date was in this week’s episode. It opens with a slave hymnal, “Read John,” which subtly transitions to Major Hewlitt’s ode to his motherland. The songs play off each other nicely, fit the time period and the plot action on screen, and gave us insight to several characters’ (or groups of people’s) motivations. It also foreshadows how the slaves’ joy over being freed later transitions to horror when they realize their “freedom” is in the hands of the British.

I hope TURN can get into good rhythm before the season’s out. There are signs it may be doing just that. One solution may be to have artists do traditional songs that sound like they could fit into the time period. TURN should focus on the show first, then use music to bring out the best of what’s on screen (with the added bonus of it being able to stand on its own legs, too). And though of high quality, TURN’s music can’t save a sinking ship if there’s nothing there worth saving.

What do you think of the show’s music? Did you have a hard time believing that Abe would illegally trade cabbages to the tune of a musician who also did the music for Budweiser’s Super Bowl commercial? Leave your thoughts in the comments below.