Column 17: How the Music of Guardians of the Galaxy Created Our Most Human of Heroes

With Oscar season now in full-effect, its worth pointing out that there has been a recent absence of popular music in nominated films. Whether it’s the period, tone, or just an effort to pick up additional nominations, Oscar contenders seem to shun the use of pop music. So I thought it might be best to take this time to look back at this year, and few films stand out more than James Gunn’s Guardians of the Galaxy. The film was not only the biggest at the box office in 2014, but for my money, the best musically.

This is not to say that other films haven’t had better original songs or more enjoyable soundtracks, but there was no film where pop music played as pivotal of a role as in Guardians. For those who haven’t seen the film, let me set the stage for you. The movie opens on a young boy who will become our hero. He’s seen in a hospital waiting room listening to a mixtape on his Walkman. After being taken to a hospital room to say goodbye to his ailing mother, he runs away crying, only to be suddenly abducted by an alien ship, with his mixtape and Walkman being one of his only links to back home. Even from the outset, the film is placing an emotional significance on music, but the way Gunn weaves music into Guardians creates something that takes it much further. 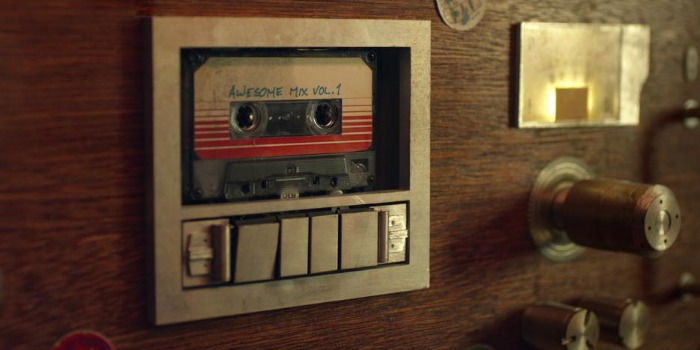 Try to think to yourself: how many times have you seen a superhero film where a character actually listens to music? This doesn’t seem like it should be so hard, does it? But it is. Our heroes are regularly born out of tragedy, self-serious paragons of justice, or overcome by grief and loss. This is why the opening of Guardians of the Galaxy is so fantastic. Just moments after seeing our character suffer such loss, we skip to a future where we find our hero not somber and serious, but dancing around to Redbone’s “Come and Get Your Love” on an alien planet. It’s a moment that immediately establishes tone, one that’s incredibly light and funny, but also deeply human.

The film’s continuous love affair with pop music and popular culture creates characters we can immediately relate to, with Gunn playing off our preconceptions of Marvel’s heroes to comedic effect. Take the aforementioned scene. Not only does it establish who our hero has become, but music itself is used for comedic effect. The locales are dark and ghastly, with an ominous opening score, so with the abrupt contrast of 70’s pop music and our hero’s gyrations, it becomes hard not to laugh.

Guardians even let’s our hero get his Zach Braff on later as he shares his love of Elvin Bishop’s “Fooled Around and Fell In Love.” The tongue-in-cheek tone of the film, however, saves the scene from being cringeworthy in a way Braff would never understand. This is the balance the entire film plays with by using pop music to create something deeply human and yet at the same time, completely silly.

And at the end of the day, in what has to be the only time in cinema history, our hero saves the entire universe, with a pop song.