When I was a kid, I remember trying to explore everything my computer could do. A personal computer was still an exciting new technology and I had so many fresh tools at my disposal. But of all these tools I had to use, I enjoyed messing with none more than Windows Movie Maker. I still have fond memories of taking popular shows or movies I watched and crudely mashing them up with some of my favorite songs. I share this not to revel in nostalgia, but because that’s what BBC’s latest experiment reminded me of.

In the last week, famous BBC radio DJ, Zane Lowe, premiered his rescored version of Nicolas Winding Refn’s 2009 film, Drive. The project overseen by Lowe earned the blessing of the film’s director and collected some of the UK’s biggest indie & electronic acts to create original music for the film. The original was already quite famous for it’s music, so putting together a new soundtrack was always going to be a sizable effort but with names like CHVRCHES, Foals, and BANKS involved, my interest was peaked. Sadly, even with the pool of talent involved in this project, the end result is nothing short of a disaster. 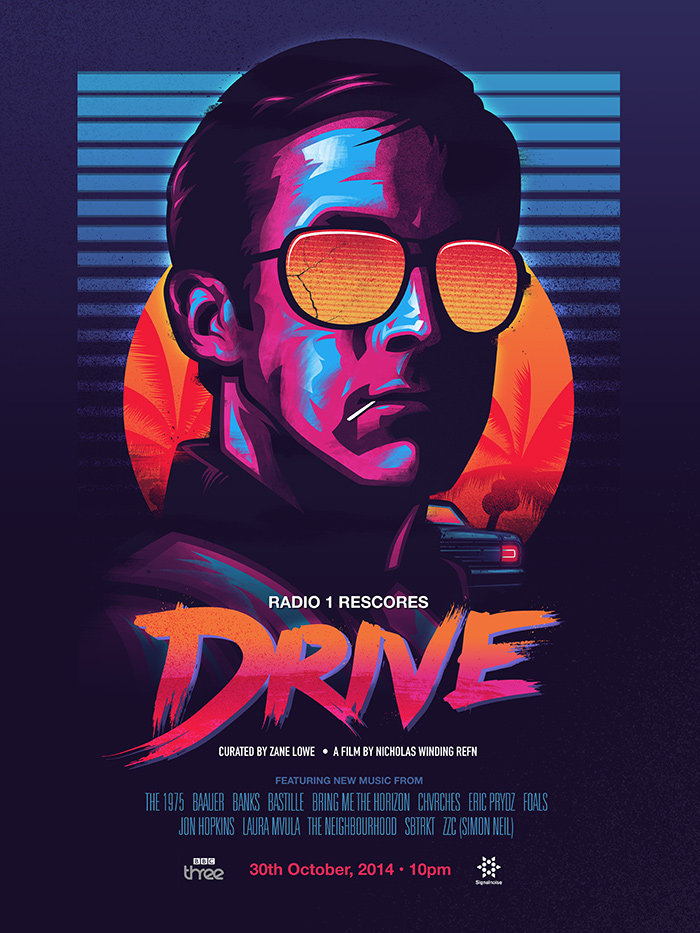 Let’s start with the obvious: the sound mixing. There are a lot of problems with the re-scored scenes and the music choices involved, but none are worse than the sound mixing. It seems in an effort to highlight the new music, Lowe’s score swallows every scene whole. Entire scenes of dialogue are rendered nearly inaudible by the booming score that surrounds it.

That said, what has actually interested me most about this project is how it highlights just how vital the use of music can be to a film. Let’s take the opening of both versions.

The following video features both the rescored version first, followed by the original.

While Eric Prydz’s rescored version captures the nocturnal vibe and effortless cool of the original, it completely removes the tension. Cliff Martinez’s original score captures the same qualities, but also brings with it a sense of genuine danger. In the original version, we trust that our hero knows what he’s doing, but that he’s nervous and stressed. Meanwhile the atmosphere created by the re-score is one so cool and nonchalant that it almost seems our hero is enjoying the chase.

In other scenes, even when the music created for it is excellent, like the new CHVRCHES song “Get Away,” it simply doesn’t sync the action it is playing over. In any given film, this would be a problem, but in Drive even more so. Refn’s original film had an outstanding soundtrack, but the reason the music popped was the way he used it. Scenes like the opening credits weren’t just soundtracked by music, but rather shot and edited to the rhythms of the music it featured. Take these two for example.

While Zane Lowe and CHVRCHES try their best to recreate the rhythms of the original opening, the two never form the flawless relationship between audio and visual of the original.

This is not to say the project is a complete disaster, Laura Mvula’s “Mellow Man” in the film’s infamous elevator scene is a near perfect stand-in. The song creates all the same emotions of the original score while standing on it’s own enough to warrant it’s inclusion. Surprisingly, Bastille’s original song “The Driver” actually creates an entirely different tone for a climactic scene but one that still feels completely in-tune with the film’s narrative. The song is catchy, but has a restraint the band isn’t usually known for, and it works for the film’s minimalist nature.

That said, when the film’s rescore does go into disaster mode, it goes hard. The film’s classic chase scene, a set-piece of visceral action and suspense, is soundtracked in the re-score by UK metalcore band Bring Me the Horizon. In a span of seconds, this once classic scene feels like a cut scene from a Need For Speed game.

Zane Lowe and the BBC’s experiment was certainly an interesting idea and one that even could have yielded some amazing results, but sadly the disassociation from narrative tone and musical tone create something that feels more like a YouTube mash-up.

Many of the original tracks are available on the BBC’s site now and are worth checking out and the re-scored version of the film is rumored to be appearing on the film’s Blu-Ray/DVD re-release.