Column 11: Buffy Goes to the Bronze

In a very strong example of being late to the game, I’ve finally started watching Buffy the Vampire Slayer (thanks, Netflix).  I’m only two seasons in so far, but the Scoobie gang’s hangout, the Bronze, is already as endearing to me as it was to the millions of fans who kept current with the show while it aired. 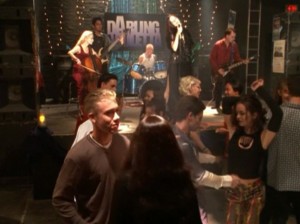 The Bronze is the ideal high school hangout spot. Its cappuccino menu and dark interior oozes cool, yet it’s also practical as a destination to do homework or date half-human, half-vampires. It’s also Sunnydale’s live music destination, featuring grungy bands as well as Seth Green on guitar. The Internet tells me that the fictional Bronze actually acted as a showcase for up-and-coming Los Angeles bands at the time, and that major music/narrative moments happen there (but in later seasons that I haven’t yet seen).

While it aired, Buffy was completely in-step with what was cool for teens at the time. For the show to incorporate live music into its teen characters’ lives so regularly was significant then for making Buffy and crew seem like normal teens, and is significant now as an indication of how teens’ tastes have changed in the two decades since the show aired.

Teens who came of age in the late 90s/early 2000s probably remember having hangout spots like the ones seen in the show. In Hamburg, NY, several attempts were made to have places like that, but none of them really took off. Regardless, I remember my older sister and her friends wanting to go to a place like that simply because of shows like Buffy or Dawson’s Creek.

Those venues lasted for a short time, but the next wave of teens came in with tastes that were slightly different. Live music moved away from community hangout spots and into places like restaurants or events like school dances. The on-screen representation of this evolved along with teens’ tastes, reflecting what teens were actually living out in their lives (think: live music scenarios in Boy Meets World…but not the 1950s time travel episode).

Then the next wave of teens came along, and live music/coffee shop entertainment for teens was corralled to religiously oriented youth group venues. In Hamburg, the Wesleyan Church built a teen hangout spot the size of a plane hangar and appropriately named “The Hub.” The mass population did not visit this place. In reality, it was kind of singled out as a place most teens did not want visit.

Today, I imagine “cool teens” want to go to coffee shops to catch the latest local acts performing some brooding number on stage. If that isn’t their taste, they’re probably at a One Direction concert. Both sides are depicted on screen.

So what has influenced the role live music plays in teens’ lives? Why was a cappuccino, folder full of homework, and live grunge bands so much a part of hip teens’ lives in the 90s, and why is it no longer that way? Like most other adults, I could probably blame the Internet. But in my quest for answers, I will now view my Buffy binge as a case-study in teenage pop culture preferences.

One last note: how about the show’s theme music? It would be.

*Side note: I keep hearing of a fantastic Buffy musical episode in season 6, which I am sure to cover in this column if only to revel in the glory that is musical episodes of popular TV shows.