Sound and motion are inextricably linked. Think about it: every motion has a
certain sound associated with it. Everyone knows what clapping hands sound like,
and you’d be hard-pressed to find someone who can’t imitate a buzzing bee. Most
sounds are universally recognized, and when they are, they become a shared human experience.

In fact, sound is so fundamental to our lives that when it defies our expectations, it’s
either unsettling, or inspires a frenzied look into why it’s different and what that
means for us. This line of thinking is what will guide Screened Plays, buffaBLOG’s
investigative coverage of the sounds that shape the kind of motion that’s become
an integral part of our lives: motion pictures, and not just of the movie variety. Any
moving image with notable sound is fair game, including but not limited to: movies,
television, commercials, shorts, cartoons, and maybe (but probably not) your
parody of the latest YouTube flavor of the week.

Soundtrack coverage is nothing new. From the first music created specifically for a
screened image, Charles-Camille Saint-Saens’ 1908 composition for L’assasinat du
duc de Guise, to modern soundtracks that eclipse the art for which they’re created (Frozen, anyone?), we’ve spent more than a century noticing, experiencing, and remembering the music that completes—and perhaps makes—our viewing experience. 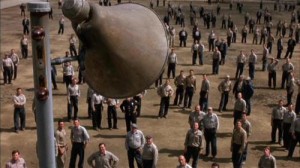 This series seems especially timely in an age where film and TV studios are paying
an awful lot of attention to their viewers’ multimedia experience. These production
companies have always wanted viewers to watch, buy, and talk about their product.
But now they want them to hear it, too.

This has given rise to what I would consider a cultural phenomenon: soundtracks
that won’t settle for being merely an accessory of something larger. They want to be
considered on their own, for how they’re not just background noise anymore, but
part of the message coming through our screens.

I should note that I’m not an entertainment critic or music analyst, but I am an avid
consumer of both media. My ever-deteriorating sight, hearing, and posture are proof
that I spend a lot of time planted in front of screens. And I really like when what I
hear is as good as what I see.

If you find yourself in the same boat, curious about trends in sound culture, screen
culture, or just really felt that this week’s Mad Men’s use of Jimi Hendrix’s “If 6 Was
9” was perfectly badass, then join me on Wednesdays where we will navigate these
euphonic waters together.

And if you’re still mulling over those end credits, I leave you with this.