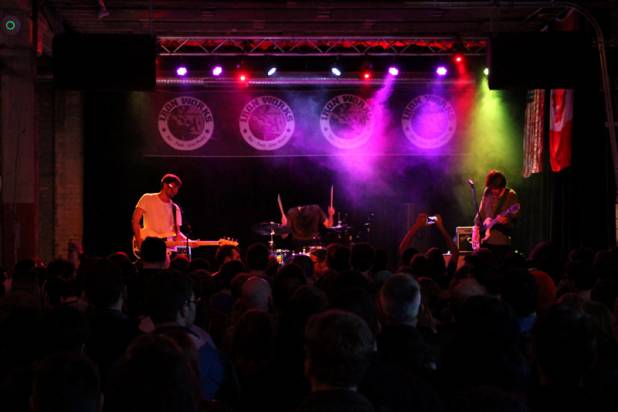 Last night’s Cloud Nothings show at the Buffalo Iron Works was a great experience. The bands played well, the crowd was into it, but it was the synergy between the two that pushed things over the top.

I admit I was worried at the beginning. Openers Pleasure Leftists, who will be joining Cloud Nothings for a few dates before coming back through Buffalo next week for your listening pleasure, were awesome, but the crowd barely seemed to move. They clapped hard, but they seemed a little sleepy.

Even when the headliners came on, I was concerned. The crowd only started to pick up a few songs into the set, when singer Dylan Baldi started strumming out the first few chords of “Stay Useless.” Lyrically, “Stay Useless” is all aching ennui, wishing for “Something to do/somewhere to go.” The crowd, at least the first few rows of it, seemed to know all the words, and when the first chorus hit, the pit really started to get going.

It was a strange pit. It occupied my attention for much of the night. Part of the reason was that a few UFC types, looking like lapsed friars with their shaved heads, were jumping around like featherweights with their fists up and I wasn’t trying to get my teeth knocked out. But, at first, it struck me as a strange reaction to a band like Cloud Nothings. Maybe not strange: Here and Nowhere Else, their new release, is more aggressive than the band’s past output, and live, it hits even harder. Baldi’s voice is still well-suited to cut through the clutter, but between three people, the band makes a whole lot of noise. Extra points to drummer Jayson Gerycz, who played so long, so insistently, that I feared he might die during the encore.

But yeah, the pit. Forgive me for mostly grabbing lyrics from old tracks, but those were the ones that the crowd knew the best. Consider the lyrics to “No Future/No Past,” which I will reproduce in their entirety: “Give up/Come to/No hope/We’re through/No future/No past.”

This song may have been the highlight of the evening. If you haven’t heard it, it’s a slow build. The crowd chanted along with Baldi eight times through the verse until exploding into the chorus. The whole point of the song is delayed gratification, and by the time the catharsis finally came, people were basically swaying and drooling on their neighbor. When it hit, the mood was celebratory: people were crowdsurfing, throwing elbows, shouting out their lungs.

But what were we celebrating? The pit was mostly dudes in their mid-20s thrashing about. They knew the words. It was strange to see them connect to the words in this manner. The apolitical angst of the Cloud Nothings, which a real bastard might be tempted to call symptomatic of the whole Millenial generation, is something that a lot of people share but aren’t quite sure how to react to. Despair is an option. Last night, people opted for revelry.

It was a moment, thankfully not uncommon, that proved that music could bring people together. But together for what? Cloud Nothings lyrics appeal to those who vaguely sense an impending, inevitable apocalypse, knowing that the world will end not with a bang or a whimper, but through a death of a thousand cuts. Standing in the pit, I felt a bit like I was standing in the eye of a hurricane: fury surrounding us, but in the center, nothing at all.

This feeling was exacerbated by the fact that there were certainly a few people up front that may have been at their first rodeo. People really out to hurt someone, or totally willing to pass a crowdsurfer into nothingness just to get him off their hands. I guess this kind of thing happens at every single show, but it stood out to me more last night. It seemed more fitting: potentially bringing harm to someone not through effort, but lack of effort, refusing to be self-conscious of your inexperience.

I guess what struck me, at the core, was how well-suited the crowd was to the music and the meaning. Being young and hung with a true despair, seeing that the world is running out of juice, that as you age you will only be faced with ever-diminishing returns: who wouldn’t jump into a collective experience like rowdy crowd at a concert with an attitude of self-possession? Sometimes, after a great show, people feel like they want to build something up. Sometimes there is catharsis in wanting to destroy. Last night’s show was the first show I have been to in a while that I felt as if people were getting hyped up on an attitude of “Why build? Why destroy?”.

I sound like I’m slagging on the show, the band and the crowd. I’m not. A rock show can be great and not feel epic, life-changing or even particularly fun (at least in the sense of pure pleasure). This one was great because the band and the crowd made perfect sense together. It was just the kind of sense that stems from lyrics like these, from “Psychic Trauma” off of the band’s new record:

“Try to stop it, try to feel something
But nothing happens, I stay the same
Is it alright to end up this way?
Life gets boring, it fades away.”

Check out Cloud Nothings playing “Psychic Trauma” live in Houston below. Audio isn’t the best, but it’ll give you an idea of what you missed last night (though they played as a three-piece at Iron Works).