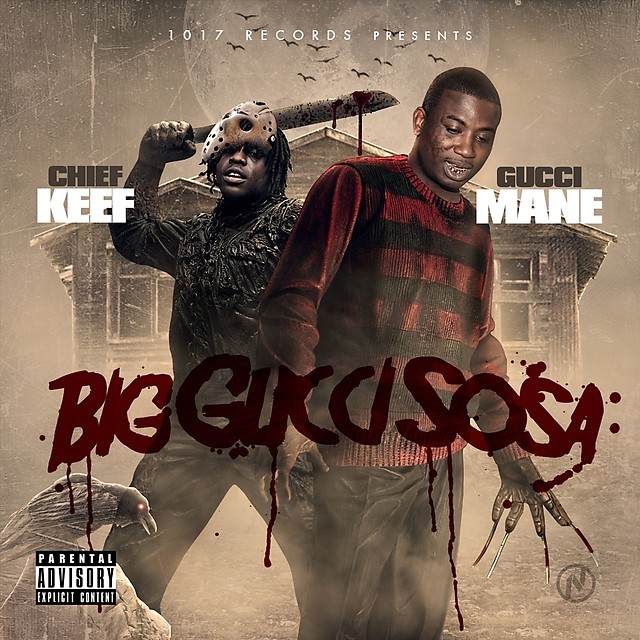 Big Gucci Sosa proves two things; Gucci is still here, and as shocking as it is, Chief Keef is back. Despite constantly being in and out of an orange jumpsuit, Gucci is consistent as ever on this thing. Keef has seemingly spent the last couple years of falling out of Chicago’s drill scene, instead opting for lean-induced, lazily-composed auto-tuned madness. It appears as though Guwop has talked some sense into young Keith Cozart though, because this album features a Keef spitting some of the hardest verses of his career.

Opening track “Semi On Em” leaves no one questioning to the mindset of these two trap artists. “Bitch, I’m Gucci Mane, you heard that I go coco-loco/So much money that my pitbull got a diamond choker” the trap god raps as the beat thumps and the bass bangs. Keef’s introductory verse on the project signals the listener that we are getting the throwback version of the still-young Chicago emcee. Keef’s voice starts the verse mixed to the left and eventually pans it’s way into both of your ears, in a really cool way to hype you up for some of the heat that he brings. He’s always been desensitized to the horror that is Chicago gun violence, and it’s startling to hear some of the lines that he rattles off here, including “She is down to ride with me and she gone hold my Glock/And she see an opp, I tell her pop her and she gone pop off”

The beauty of Gucci Mane is the underlying comedy in his music, and he’s totally aware of it. On “Banger,” Gucci strings together the line “Ball out like George Gervin/I’m a real killer but a good person” and it gets a laugh from me every time. It’s like rap comes so easy to Gucci, and he’s been doing it for so long,  that he throws in a ridiculous line like that just to make sure that we’re still listening. It’s more-so for his own entertainment.

Gucci is not just a trap legend, he is the trap legend, and on “Turn Up,” Gucci let’s everyone know that his status is higher than there’s. In the chorus, Gucci proclaims “Park my Rari where your Vic could have been/And there’s a dot where your neck could have been,” and goes even further in his verse with “You can’t go in the hood, but Gucci Mane can.” Eveyone respects Gucci. Keef is also especially impressive on this track, starting his verse out with “Ring ring ring it’s money on my line/I be getting bands out the Benz/A fuck n***a try me then he die/N***a better stand where he stand. I know an ABAB rhyme scheme isn’t usually super impressive, but when Chief Keef does anything remotely poetic, it’s worth noting. Keef also has some really funny lines, but I think they’re much less intentional. When reflecting on his somewhat highly publicized lean addiction, Keef says “They say I was getting fatter from the Sprite/But now I don’t do that shit.” It’s just funny how straight up he is.

There’s also the braggadocios “First Day of School,” where the rappers focus on that key outfit that everyone busted out when the day that school started. Chief says “If I still went to school, I would walk in so icy/I’m always winning trophies, that’s why n****s don’t like me.” I just really need a look at Chief Keef’s trophy case before I pass. It’s also worth noting that Gucci is too far removed from high school to drop a verse on this, just sticking to the chorus. The project is full of fun, hard-hitting songs like this, that are meant to be enjoyed at face value.

While Keef is improved, he’s far from perfect. Album-closing track “So Much Money” includes an alright, probably forgettable couple of auto-tuned verses from Gucci, but the whole song becomes unlistenable when Chief Keef’s verse comes in. The first time I heard this, I actually thought that I accidentally played another song on YouTube while “So Much Money” was playing, that’s how cluttered and sloppy this verse is. The quality of it makes me think Keef called in from a phone booth during a wind storm to record it. I’m about 90 percent sure that this was an already-finished Gucci Mane song that they through Keef in the middle of to stretch the mix-tape to 12 songs. To reiterate: “So Much Money” is a bad song.

There’s definitely some filler tracks on this bad boy, but overall beats from the likes of Dun Deal and 808 Mafia help each track consistently bang. Hearing an intelligible Keef dropping traditional bars is just so encouraging given his recent output. He was really in danger of falling completely out of the music industry and back into Chiraq. I’m not saying that he’s the best person ever, but at least he’s going to likely permanently escape the street violence he grew up in.

Big Gucci Sosa is a fun, banging project from two great trap artists at different stages in their careers. Some of the lines are scary, some of the lines are funny, and every song is a different kind of entertaining. It’s also long-awaited, as Keef began tweeting about it’s release nearly a year ago. Give it a shot, because when these two get it right, they release some of the best trap rap out there.