Celebrate the Vernal Equinox with Igloo 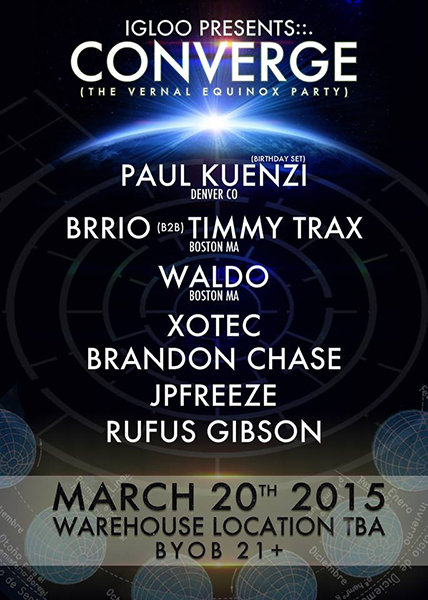 The Igloo Music crew is back again with another party, this time to celebrate the oncoming spring. That beautiful moment when light and day are nearly the same and around the world various cultures are celebrating the renewing symbolism of the season.

Maintain your enthusiasm for spontaneity, the location of the event on Friday, March 20th will not be announced until the day of, by calling a hot-line number.

“I still dig the concept of being secretive about the location of events. It’s fun and can build up great anticipation for the partygoer, especially if it’s at a spot that no one has never seen or been to ever,” said Igloo’s Rufus Gibson.

“Buffalo has a very structured party scene. Same show, same venue, same time of year. We wanted to break the mold and throw a little mystery in the mix,” said the crew’s John Sullivan. “Our goal is to beat the structure and conformity and attract truly dedicated people to our show. It’s not about how many, it’s about the right people. We want to steer clear of the generic and open a door to the roots of where this scene started.”

For the dedicated, long-time goers, this will be a party about nostalgia. For the youngins, it’s a history lesson, he said, “a looking glass into where it all began.”

Performances will come from Buffalo DJs as well as those hailing from Boston. Big on the lineup is the return of Igloo OG, Paul Kuenzi, who’s now based in Denver, Colorado.

“Paul is a true brick-layer for Buffalo’s house and techno scene. Paul and Chase had a vision that turned into Igloo House Music. His energy carries through a party and his efforts are why we’re all inside the Igloo today,” Sullivan said. “When he steps up, everyone will dance — it’s inevitable. He seems to get everyone marching front and center, and no one breaks stride. The first time I heard Paul it brought me back 10 years and influenced me to get back into my roots of electronic music.”

To those that find themselves intrigued by such a statement, he said, “You will just have to be there Friday to understand fully.”

“Dude is just straight raw. Paul knows how to fucking destroy the dance floor. It’s going to be crazy having him back around and for all the cats who haven’t heard him play yet, they’re in for it,” Gibson said.

Also playing will be Brrio b2b Timmy Trax (Boston), Waldo (Boston), as well as Buffalo’s Xotec, Brandon Chase, Rufus Gibson and JPFREEZE. Each DJ on the lineup is chosen specific for this particular celebration.

“The sound must match the atmosphere, and that’s a huge part of what we all do,” Sullivan said.

“We have an crazy fun lineup for the night! Besides Paul, Poppa Chase, JP and myself, we also have the honor of having Xotec on the bill. That alone just needs no introduction and if you don’t know who Xotec is, do your damn homework,” Gibson said. “We also have three guests making their way from Boston, Mass. Timmy Trax, Waldo, and Brrio.

“Expect house, techno and a lot of weirdo shit! These are very good friends of mine and they smash it up in Boston at all the top clubs and have played alongside with some of the best DJs in the world: French Fries, Flava D, Ardalan, Louisahhh, Brodinski, etc. These dudes fucking put in work and I’m more than happy to know everyone in the Basement Movement fam, top dudes. I’m excited for this night! These type of parties are rare and don’t happen to often so any chance that we could make one happen, it’s always very special,” he continued.

Sullivan added, “We keep true to house and techno music. We keep it grass roots and highlight the talent that’s right under our noses. The Basement Movement Trio coming in from Boston are super talented, passionate DJs who care more about the music than the money or fame. That’s the same for all the DJs we book, local or regional. For example, Xotec (a personal favorite DJ of mine for 15 years) always knows how to cater to the room.  When he has the chance to play for us, I jump on it every time, because he’s the type of DJ that helps you remember why you love house [music] in the first place.”

What makes the night increasingly more special is that the day of the party, March 20, will also begin with a total solar eclipse, which only happen every 360 years.

“One word: Family. I wouldn’t know where I would be at without everybody. These are some of my closest people so it’s just straight family love,” he said.

If you need a little visionary peek into past Igloo party excursions, check out their promo video from the 2014 Reanimate New Year’s Eve party. The people that didn’t go to this day tell me how much they regret not going.

Presale tickets are limited and can be found at both HeadSpace Glass locations (67 Elmwood Ave. & 920 Niagara Falls Blvd.). The event is BYOB, but there will be no glass allowed.