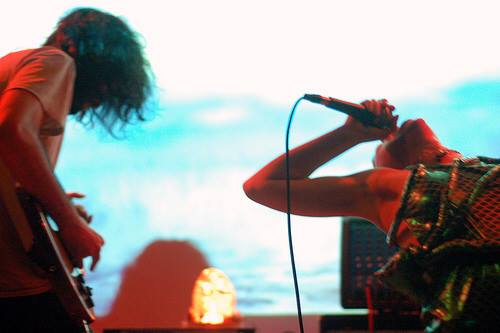 I shake my head no.

“Oh they’re awesome. They are this weird…I don’t even know how to describe it. It’s this avant-garde noise, neo-folk fusion of sorts. The first time I saw them was at the Sugar City Metro Show.”

When Smith talks about Cages, his eyes light up like a redneck showing off his new thirty-aught-six at his daughter’s wedding. With excitement like this, it’s no wonder that he decided to put out Cages new record, Vivpary, on his imprint Black Dots Records.

Vivpary is Cages follow up studio release to 2009’s, Folding Space. It was written in 2011 and recorded in 2012 at GCR in Buffalo.

“The sound is really amazing. It’s the closest picture of what we have been working on. Definitely different than anything else we have recorded,” guitarist David Bailey says, adding, “This is the most fully realized of the duo, even though it’s almost three years old.”

“I think we were able to naturally capture it, just natural things that we weren’t able to do in the past,” vocalist Nola Ranaollo states.

The duo of Cages has been in the game for nearly a decade, however their body of work doesn’t show that.

“The problem of having a lag in our releases is because we have a back log with nowhere to release them,” Ranaollo explains.

“The CD that came out in 2009, we had finished in 2006. We sent it out and no one wanted to put it out.” Bailey adds. “We made copies of it then released it in 2009. We talked to people in 2011 and they wanted to do something, and then we recorded this. Then they said they didn’t want to do it. We sent it out to like 34 labels and no one wanted to do it. We were ready to put this out ourselves again and then Josh [Smith] came along. It was a great fortune that he was into it. We’ve had…there’s always this weird huge gap between when we record something and we release it. We’ve recorded things that still aren’t out.”

Anyone who has managed to see the ever elusive Cages actually out playing knows that it is a sight to be seen. Every band likes to say, “it’s hard to describe our sound,” but in Cages’ case, there is an abundance of validity to that statement. The duo brings its own blend of noise and avant-garde to the Buffalo music scene. Between Bailey’s guitar and effects combating with Ranaollo’s vocalization, it’s conflicting and harmonious. In the end, it finds the utopian balance on the other side of the zombie-robot apocalypse. However, balanced musical utopia doesn’t always transcend very well to the club and bar scene.

“We’re just doing too much quiet stuff, which can be obnoxious because you can barely hear things. It just not the nature of stuff in clubs. We will find different places where we can do this,” Bailey explains.

“Lately, we have been into using the actually venue and space as an instrument, and you can’t do that in a club if you’re totally amplified, adds Ranaollo adds “Personally I like playing clubs. I wouldn’t be against it at all. I just feel like people don’t enjoy it there.”

“It’s in the basement,” Bailey says. “There are seats, so people can just melt into it.”

In the near future Cages will be releasing a recording that they did with a string quartet this past summer and may be hitting the west coast with a tour with The Body. You can grab a copy of the Vivpary LP at Black Dots Record Boutique on Lafayette Street or the shop’s online store.