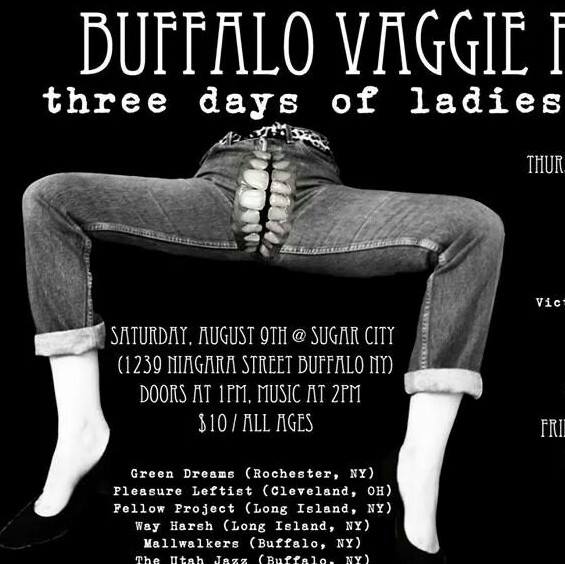 I’m sure you have seen the flyer.

The flyer that I am speaking of is for the Buffalo Vaggie Fest, which will be celebrating its fifth year next weekend. The event is the brainchild of Britt Wagner, and even though it is a “lady band” fest, Wagner has a hard time identifying herself as a feminist. Well, maybe she is a feminist by its technical definition, but she prefers the term “equalist.”

“I don’t like to say that I am a feminist, but I’m an equalist. Equal shit for everyone,” she says as she takes a sip from her bottle of Magic Hat. “I’ve been places where people have been like ‘We’re girls and we’re going to be separate,’ which is all well and great, but look at how many people are supporting you. Why wouldn’t you embrace all of those things, instead of separating yourself from them?”

Being excluded just because she has a vagina isn’t something that Wagner can really relate to, at least not in the Buffalo punk scene. Wagner is not only the founder and organizer of Vaggie Fest, she also plays drums in the punk outfit, Utah Jazz.

“I feel like Buffalo has always had so many girls, to the point where it’s not even a difference. Punk has always been a male-dominated ‘I’m going to punch everyone’ scene, which has always been very intimidating to women. Where it’s been like ‘Oh, I could do that, but I might get hurt,’ I’m like fuck it. I’m going to do it, but never in Buffalo have I felt separate from the whole community of music,” said Wagner.

The name Vaggie Fest itself can make one think of man-hating women getting together in a field and worshiping the menstrual gods, but it’s anything but that, Wagner explained.

“We tried to change it [the name], because it was always weird when we would ask touring bands, ‘Hey, do you want to play the Vaggie Fest?’ And they’d be like ‘What the hell is that?’ And we’d be like ‘Well… it’s pretty much like a lady fest, but with less politics involved,’” she said.

Thursday, August 7th and Friday, August 8th, will be held at Broadway Joe’s. The third night of the festival will take place at the rebooted Sugar City, at their brand new location at 1239 Niagara Street. The multi­-day move was a joint decision made by Wagner and the new co-organizer Keely Guiliano, who works at Broadway Joe’s and organizes their Punk N’ Tots series.

“My boss is really awesome, and I know people hate on Broadway Joe’s a lot, but it’s a shitty dive bar and always has been. They’re very slowly making improvements, but at least they let us have shows there,” Guiliano says as she takes a drag from her cigarette. “I bartend there on Thursday nights and do punk shows. The Polish Library wasn’t available to us this year, so I checked to see what dates were available at Broadway Joe’s. So the first night of Vaggie Fest is going to be Punk N’ Tots on Thursday, and then Friday at Broadway Joe’s.”

Guiliano may be a Buffalo transplant (she has lived in Buffalo for three years now), originally from Long Island, but she is just as embedded in the Buffalo punk scene as Wagner. In addition to working at Broadway Joe’s, she plays in two bands, Cross Stitch and Hot Tip. She is also the founder and operator of the DIY space, The Glitter Box.

“I’m really excited for the new Sugar City venue. They have just been floating around for the last two years. It is a really great DIY space run by a bunch of awesome people. I think it’s the perfect spot to do the third day,” Guiliano said.

The biggest reason for the expansion is simply because there are so many bands. In previous years, the festival has had up to 13 bands, while this year, there are 26 bands, 12 of those bands hailing from Buffalo.

“One day would be impossible,” Wagner explained.

“Obviously, we want bands from here to play, but we also don’t want to be just local.” Guiliano added.

Wagner told us, “When it started, I was like, who do I know who has played Buffalo who can come back here? And it’s always been like Pittsburgh, Rochester, Syracuse… like, who do we know who just wants to come hang out and have a good time, and play?”

This year, festival-goers will get to see some of those bands from Rochester and Pittsburgh, as well as Long Island, Cleveland, Illinois, Milwaukee, and New Orleans.

For Wagner, the sky is the limit to how big Vaggie Fest can get.

“This year is kind of a test run. I mean, because this thing is getting huge. I want bands next year to be like ‘Can we play this? I want to come here.’ That’s never happened, ever. It’s always been, okay, who can I ask? Who do I know? I want it to be like, ‘Can we please play this year?’”

It’s not just the amount of bands either, it’s the venues.

“Next year, I’d like to have it at one place for one or two days. Now, this is my dream fantasy: to get land and have everyone camp out and hang out, for two nights.” she added.

Above all, for Wagner and Guiliano, Vaggie Fest is about inclusion, not exclusion. It’s not about men vs. women. It’s not girls rule and boys drool. Wagner explains her point of view simply by saying, “I feel like at Vaggie Fest, it’s like we’re not even going to think about that. Yeah, it’s cool women who are shredding and whipping it up, and let’s just look at it as that.”